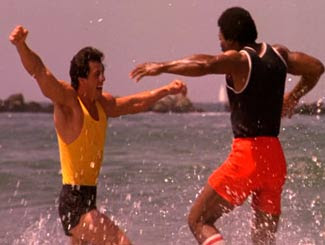 Two unidentified members of the Flying Dutchmen, above, celebrate following a really good morning run at unseasonably warm Jones Beach. Will the training be enough to knock off Clubber Lang, err, VCU? And were Rocky and Apollo the first bromance? Discuss amongst yourselves.

Sully Ray—who, by the way, is still oh-for-the-season when it comes to catching T-shirts—called Thursday afternoon to talk about what we’d just seen Wednesday and what we might see Saturday, when the Flying Dutchmen visit preseason favorite VCU. The hope, expressed an hour or so before VCU was to face Drexel in Philly, was that maybe a game against Bruiser Flint’s scrappy and physical bunch would exhaust the Rams and leave them particularly vulnerable less than 48 hours later.

So much for that. Apparently, the upset last Saturday at the hands of Delaware in the Real CAA Opener woke up the Rams, who were driving the so-calm-I-wonder-if-he-has-a-pulse Anthony Grant crazy but have won their last two games by 29 points apiece. Now, granted, those wins came against UNC-Wilmington and Drexel, each of whom was roundly picked to finish at or near the bottom of the CAA. But still: Two straight wins by 29 points means sneaking up on VCU is out.

There are plenty of interesting storylines as the Dutchmen seek to beat VCU in Virginia for the first time ever. Hofstra is 0-6 all-time at VCU and has beaten every other conference foe on the road at least once.

A Dutchmen team that—warning! Terrible pun coming up!—prides itself on defense, albeit out of necessity these days, gets the highest-scoring team in the conference and the NBA-bound Eric Maynor, who ranks 14th in the country with 22.5 points per game. Charles Jenkins’ performance Wednesday gives some hope that he can contribute even if he remains ice-cold from the field, but maybe going against Maynor—with whom Jenkins was neck-and-neck for the conference scoring lead before his epic slump—will give him an additional jolt.

Is Cornelius Vines’ willingness to shoot inside the 3-point line—and occasionally drive to the basket—is a trend or an aberration? The Dutchmen will be a much better offensive team if it’s the former.

It’ll also be interesting, especially with Greg Washington in a mini-slump and still not quite a 30-minute-a-game guy, to see if the Milk Carton likes of Darren Townes and Miklos Szabo see a lot more PT against the Rams, who have just two players 6-foot-8 or taller averaging 19 minutes per game.

I can’t blame anyone whose prediction is pain for Hofstra, but my guess is the Dutchmen are more relaxed Saturday now that they’ve got a win under their belts. And hey, the unpredictable is predictable in the CAA these days and Delaware beat VCU and the Dutchmen beat Delaware, which means the Dutchmen will win. Either way, tune in to MSG-Plus, unless you live outside of the Island and five boroughs, in which case you’re screwed.

Some other bits and bytes heading into the weekend:

—The plan is to write more about this next week, but I’ve decided Dutch Nation’s criticism of Vines is particularly misguided because the Flying Dutchmen have never had a guy like him…ever. Think about it: In the last 15 years, have you ever looked on the court and said “If he wasn’t wearing a Hofstra uniform, I’d loathe that guy?” Oh sure, the likes of Loren Stokes or Speedy Claxton earned some scorn from opposing fans, but that was more of the jealous, damnit-that-guy-drives-me-crazy-because-all-he-does-is-figure-out-a-way-to-beat-us type of contempt.

Vines, on the other hand, has as much swagger when he’s 0-for-10 as he does when he’s 5-for-10. And in my completely unbiased opinion, I think that’s good. Except if he was on the other side. Then I’d say it’s bad. And so would you. Even if you think he’s bad right now.

—True story: While writing this blog, I saw the video for The Rolling Stones’ “Emotional Rescue.” I think that’s ironic, in the sense that it’s not ironic at all.

—Ken Pomeroy, who was projecting at least 13 conference wins for the Dutchmen three weeks ago, is off the bandwagon too. We’ll remember this, Ken!

—I blogged Wednesday about the similarities between this Dutchmen team and the 2004-05 edition, but the first team I thought of while driving home from Boston Monday was the 1995-96 squad. Those Flying Dutchmen had two transfers playing vital roles in Lawrence Thomas and Seth Meyers (the one we don’t loathe). It had a couple of seniors who were once starters but who had been relegated to little-used reserve roles in Matt Carpenter and Chris Johnke.

And that team went into a major, season-ruining nosedive after a convincing win over Towson State (that’s right, Towson was going by its rightful name back then). An 83-63 win over the Tigers was the third straight NAC win for the Dutchmen, who improved to 4-4 in conference play and 7-7 overall. I remember this stretch occurred during Intersession and had me worrying that I’d made a huge mistake agreeing to go to Florida with my future wife for spring break, which coincided with the start of the NCAA Tournament. Hofstra was going to go dancing and I wouldn’t get a chance to cover it.

Turns out I had absolutely nothing to worry about. The Dutchmen followed the rout of Towson State by losing their next nine games. And the conference losing streak reached 10 games before they beat Hartford at MSG in the regular season finale. The Dutchmen were bounced by Northeastern in the play-in round of the NAC Tournament, after which Sully Ray and I went to the Stone Balloon and eventually ended up in a party in the room of a couple New Hampshire players. Seriously. It was a very, very long drive home the next day for Sully Ray.

Where was I? Oh yeah. In retrospect, the comparison to the 1995-96 team was a bit of a panicked one. That team’s longest winning streak was three games and its high-water mark was one game over .500—at 1-0 and 2-1. These Dutchmen extended their winning streak to eight by following the Towson win with victories over Stony Brook and St. Francis. And while Darius Burton was an outstanding player, he wasn’t a Jenkins- or Washington-type.

—And one more thing about the 2004-05 team. It ended the regular season on a six-game winning streak, during which it won home games against James Madison, UNC-Wilmington, Towson and George Mason and beat Delaware and Old Dominion on the road. This year, the Dutchmen’s final six conference games include four home contests against Towson, Old Dominion, James Madison and UNC-Wilmington and a pair of roadies at Delaware and Georgia State. (The Bracket Buster is also in there)

Email Jerry at defiantlydutch@yahoo.com.
Posted by Jerry Beach at 7:26 AM