There but for the grace of Jim... 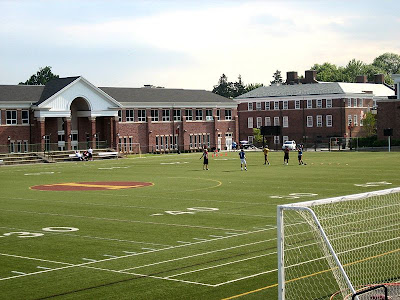 This used to be the Gaels' playground...

The news flew under the radar last week, but Iona disbanded its football program, effective immediately. It was a predictable demise precipitated by age-old—or at least decade-old—factors.

Iona doesn’t award football scholarships, which made it as relevant on the Division I-AA landscape as the newspaper in the dotcom world. Even more damaging to the Gaels was the collapse of MAAC football, which had 10 teams at its peak but which saw most of its member schools drop football earlier this decade. The MAAC was down to four teams last year, but Duquense left for the Northeast Conference, Marist bolted for the Pioneer Football League, which is the only non-scholarship I-AA conference in the land, and LaSalle disbanded its program.

Iona declined an invite to the PFL and found it nearly impossible to fill out a schedule or compete as an independent. The Gaels went 3-8, but recorded all three victories against Division II or Division III foes by a grand total of 13 points and were 0-7 against Division I-AA opponents.

A loss to Division III Wesley began a season-ending six-game losing streak in which the Gaels lost by more than 30 points three times lost by more than 40 points twice—including a 68-9 thrashing at the hands of Stony Brook. (So, if Stony Brook was 59 points better than Iona, then Hofstra would have beaten the Gaels 99-0) Iona’s closest game against an I-AA opponent was its last, a 23-7 loss to I-AA rookie Bryant.

Decisions like this make me glad I’m not a college president or athletic director. From a bottom line perspective, it’s tough to argue with the decision to dump the program. Even at the non-scholarship level, it was surely hemorrhaging money, and to make football relevant again, even in the Pioneer, Iona would have had to follow in the footsteps of Georgetown and infuse cash into upgrading the program and facilities. Iona’s Mazzella Field, which had the lowest seating capacity of any Division I or I-AA stadium, looked like a high school field.

And all that expense for…what, exactly? As we’ve all learned over the past 15 years, even an I-AA program that consistently wins is little more than a curiosity to the general public. If you’re not competing for a BCS berth, nobody cares except a tiny fraction of the alums. And the last game at Iona drew 483 fans. That’s not a misprint.

But that tiny fraction is passionate about the sport. This was the 31st season of football at Iona, which began as a Division III program in 1978 and made an NCAA-mandated move to I-AA in 1991. That’s thousands of alums who donned the shoulder pads and are now quite sore at the alma mater. And there are surely hundreds, if not thousands, of fans who took pride in rooting for a football team at a basketball school and continued to follow the team well beyond graduation. They’re surely not happy today.

The demise of Iona football got me thinking about Flying Dutchmen football and what could have been had Hofstra not upgraded the program at the behest of a passionate and rather powerful alum—school president and former football player James Shuart.

Like Iona, Hofstra jumped from D-III to I-AA in 1991. But unlike Iona, which had a natural home for all its sports in the MAAC, Hofstra had to make the move to I-AA during a turbulent time for the athletic department. The East Coast Conference was in its final season and down to just seven teams in 1991-92, and all four football-playing schools (Buffalo, Central Connecticut and Towson State were the others) were independents making the same transition as Hofstra.

Fortunately for Hofstra, being an independent in the early ‘90s wasn’t the scarlet letter it is today. According to the 1994 football media guide, 17 of the 116 I-AA teams were independents. (Thanks to Jim Sheehan for including the list, no doubt realizing how handy it would be for me 14 years later) This year, it was six out of 125.

The scheduling challenges remained, though, and played a huge role in Hofstra missing the playoffs following a breakout 8-1-1 season in 1994. “Maybe it would be easier if we were in the Yankee [Conference],” Joe Gardi told Newsday in a story published Nov. 29, 1994.

Shuart traveled to the NCAA Convention in January 1995 to personally pitch Hofstra’s candidacy to the Yankee Conference. But despite Shuart’s enthusiasm, the seemingly natural fit, Hofstra’s continued success—the Dutchmen proved to be no fluke by going 10-2 and earning a playoff berth in 1995, the first of four postseason appearances it would make in a six-year span—and the addition of scholarships, getting into the Yankee took so long that it was called the Atlantic 10 when it finally accepted Hofstra for the 2001 season.

And by that time, being in a conference was a necessity, not a luxury. The 17 independents from 1994 had either upgraded to Division I, landed in a I-AA conference or disbanded the program by the start of the 2001 season. (Thanks to this site was an invaluable resource in figuring out where everyone went between 1994 and now)

So what would have happened if Shuart wasn’t the program’s biggest booster? Would Hofstra football have beaten Iona to the where-are-they-now file?

Probably not. Even back at the beginning of the I-AA days, Hofstra football appeared too big to fail (you know, like America’s banks). Hofstra Stadium was one of the better facilities in I-AA and the multi-million dollar Margiotta Hall opened in 1992. And football at Hofstra began in 1937, which makes it almost as old as the school itself.

Even without Shuart’s encouragement, Hofstra probably would have ended up moving into the Atlantic 10 for football, since the A-10 housed all the football-playing CAA schools.

There’s no doubt, though, that Hofstra made the move into the upper echelon of I-AA programs at the right time, because it’d never happen today. Shuart, who retired in 2001, is merely a big fan of the program and the school is now run by a president and athletic director whose passion for the sport is directly tied to the bottom line…which is ugly and getting worse.

Even if the program is a giant money loser, there’s too much invested in and around Shuart Stadium to pull the plug. It doesn’t make much sense for the stadium to merely host graduations, Hofstra lacrosse games and the Long Island high school football championships.

It will be interesting, though, to see what happens when the fledgling programs at Old Dominion and Georgia State complete their transition periods and join the CAA in 2011 and 2012, respectively. A 14-team conference is just about unmanageable. Will Hofstra take one for the CAA by volunteering to downgrade the program to the partial or non-scholarship level? Getting rid of scholarships and competing in the Pioneer would surely save the school huge chunks of change, even accounting for the travel expenses in the coast-to-coast league.

Such a decision would be a disappointing one, but it would sure beat the alternative. Just ask fans of Iona football.

Email Jerry at defiantlydutch@yahoo.com.
Posted by Jerry Beach at 11:35 PM

I know a couple of people who played or play for Iona at this time. The one (graduated) said he kind of saw it coming, but it still stinks. He thinks it'll be a break -- and like 10-15 years down the road, football will return to Iona.

His brother is still there, has two years of eligibility left and apparently isn't too sure what to do yet (though he could graduate early, it seems).

Always crappy to watch when schools can programs. I've watched my first of three alma maters cancel wrestling not once, but twice. When it was canned the first time, they were one of the finest junior college programs in the nation.

And I agree. Canning an athletic program would be why I wouldn't want to be in the spots where they have to make those decisions.