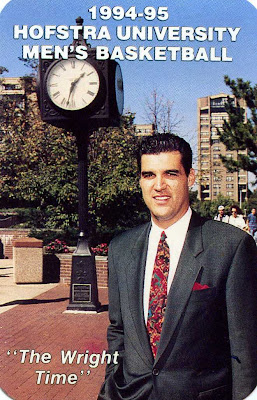 Oh yeah. How's this for old-school? You have no idea how giddy I was when I found this. Actually, you probably do.

Thirty-six weeks ago today, on a cold and rainy and mostly crappy afternoon, the Flying Dutchmen ended their season with a thud in an 81-66 loss to the Tigers that was not nearly as close or as competitive as it sounded.

It’s going to be cold and rainy again today and these Tigers (Clemson) may very well win by a comfortable margin just like those Tigers (Towson), but even if that happens, it will not be crappy, because basketball is back. Giddy. Freaking. Up.

We’ve spent thousands of words over the last few weeks anticipating the season, so let’s dispense with the build-up and get right to forecasting how the Flying Dutchmen will fare.

NCAA Tournament: Hofstra, relegated to a no. 4 seed despite its unbeaten record when this guy once again finds a way to put the screws to the Flying Dutchmen, wins its first four tourney games by an average margin of 42 points before it destroys UConn, 118-48, in the national semis. The Dutchmen then throttle North Carolina, 121-56, in the title game to complete their 39-0 season. The world’s craziest booster, Boone Pickens, will offer Pecora $36 million to coach Oklahoma State, but Pecora agrees to stay at Hofstra with a small raise after the school agrees to officially change its nickname back to Flying Dutchmen.

OK fine maybe that’s a bit over-the-top. The Dutchmen will lose at least twice and the school would never agree to change its nickname.

In all seriousness, I see the Dutchmen finishing fourth in the CAA. Only one prognosticator has picked Hofstra higher than sixth thus far, so I welcome your “Homer!” chants. That’s fine. My blog, my bias.

Of course, if I was basing my pick solely out of sheer fandom, I would have really picked them first. But I won’t be surprised at all if this team earns a first-round bye and is a legitimate threat to win the automatic NCAA Tournament bid come the first weekend of March.

This is the deepest and biggest team Tom Pecora has ever coached. Remember when you’d sit at the Arena and worry what would happen if Adrian Uter or Greg Springfield drew two fouls before the second TV timeout of the first half? Not as—pardon the pun—big a worry this year with six players 6-foot-7 or taller. Pecora’s got enough bodies to withstand foul trouble, though he clearly wants Darren Townes, Dane Johnson and Greg Washington to establish themselves as the big three down low.

The guard play may not be on par with Stokes-Rivera-Agudio, but it’ll be a strength with Charles Jenkins primed to enjoy an All-CAA-caliber season and junior college transfers Tony Dennison and Cornelius Vines ready to make an immediate impact. There’s depth there, too, and maybe Greg Johnson, Nathaniel Lester and Zygis Sestokas can be more consistent in limited roles (though I wonder if Sestokas can ever rediscover his shooting touch if he’s not getting starter minutes).

There are questions to be answered and growing pains to be endured, but the non-conference schedule should allow the Flying Dutchmen to work out the kinks without incurring too many scars and have the team primed to peak in February.

Mostly, there’s a hunger generated by last season’s disappointment that is impossible to ignore yet also difficult to perceive from a distance. It reminds me of covering the Red Sox at the end of the 2006 season, when Josh Beckett was being labeled an overpriced disappointment after he posted 16 wins but an ERA north of 5.00 in his first season with Boston. But by the end of September, it was clear that the disappointment was already driving Beckett and that he was too proud and too talented to have another season like that.

Most people pegged Beckett as no better than the second- or third-best pitcher on the Sox staff entering 2007, but he won 20 games and was historically filthy during the playoffs as the Sox won the World Series. (Alas, I figured the Icepick would let him go in our fantasy league and I’d swoop in, draft Beckett and cruise to the pennant, but the jerk kept Beckett and I finished second by half a point. Let’s move on.)

Of course, I didn’t go to Josh Beckett University, so it’s entirely possible I’ve overestimated Hofstra’s potential this season. But I don’t think that’s the case, and I think this team is determined to prove last year was an aberration and that it's being underestimated by the rest of the league. And I think the Flying Dutchmen have 20 wins by the CAA Tournament and play beyond Richmond.

And if not? We’ll have fun anyway. Let’s get going. Christmas Day is here. Time to open our presents.

Rookie of the Year: Lots of choices, obviously, but I think Miklos Szabo is going to have a monster year. In fact, I think I have the nickname that Michael Litos is seeking for Szabo, but I’m going to hold off on unveiling it until I see him in a game.

Breakout player of the year: Darren Townes. Eight points and nearly seven boards a game last year. Don’t think it’s too much of a stretch to envision 13 and nine this year.

Player in danger of being buried: Nathaniel Lester. Unquestionable talent, but his confidence seemed shot by the end of last year and he needs a quick start to avoid getting lost in the six-deep guard rotation.

As for this weekend, I’ll say this: It’ll be really good news if the Flying Dutchmen win two—or, gasp, three—games this weekend. Pecora is still easing the newcomers into the game plan and views the Charleston Classic as an extension of the pre-season. (One quote that didn’t make it into the Q&A Thursday: “We’re going to go play this weekend and it’s just too early. It’s too early for any team to be playing games, but especially for a team that’s going to have three new starters.”)

Playing two games without Szabo provides an additional challenge. And the schedule doesn’t do the Flying Dutchmen any favors: After opening against Clemson—a hometown favorite picked to finish fifth in the ACC—they’ll take on either Western Michigan, the pre-season favorite to win the MAC West, or TCU, which is picked last in the Mountain West. (The opponent in game three Sunday will be either Temple, East Tennessee State, Southern Illinois-Edwardsville or host College of Charleston. Click on the schools for season preview information obtained from their official websites.)

So to go 1-2 or 0-3 won’t be cause for worry. But to go 2-1, even if those wins are in the consolation bracket, will be quite encouraging. And 3-0? We might change the name of the blog to Deliriously Dutch.

I’ve rambled on (shocking), so my real CAA predications will have to wait until at least Monday. Come back then for a recap of the weekend…and stop by tonight, too, if you’re listening to and/or tracking the Dutchmen online. I might live blog it, though I imagine most of my audience will be next to me (my wife), sleeping (Loyal Readers Sully Ray and Rob) or playing poker (Loyal Reader John). I also imagine live blogging a radio telecast would be difficult. But who knows? We’ll see if the mood strikes.

Oh, and for the sake of consistency: Northeastern 21, Hofstra 14.

Email Jerry at defiantlydutch@yahoo.com.
Posted by Jerry Beach at 6:03 AM