We got the CAA spinnin’ right in our hands… 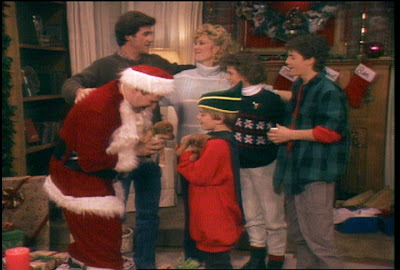 In this very special episode of Growing Pains, the Seavers learn the true meaning of Christmas...and get season tickets to see the Flying Dutchmen basketball team at the PFC.
This story from the Nashua Telegraph contains the type of straight-to-the-point lede (it’s spelled correctly, in the journalistic sense) that is necessary in today’s attention span-starved society. After all, people just don’t have the time or the patience to read a guy go on and on and on with a preamble that leads up to the crux of the story, even if said preamble is entertaining and well-constructed. People just want the facts. That’s all they want. All they have time for. Let me know what happened so I can get on with the rest of my clicking around the Interwebs.

Winning ugly covers up a lot of blemishes. (That recap is from the Union Leader newspaper) Losing ugly makes for a long ride home. And the Flying Dutchmen lost ugly Saturday in falling to ninth-ranked New Hampshire, 45-25, in bucolic Durham, NH. (I have no idea if Durham is bucolic. But my family regularly vacationed in New Hampshire when I was a kid and everything I’ve seen in the Granite State defines bucolic)

You know a loss is ugly when the lede (there’s that word again!) of the gamer by the Hofstra sports information department points out the record kickoff return yardage racked up by Aaron Weaver (he had 254 yards, one more than Mark Cox had in a 1990 game). If the Dutchmen won a shootout, that factoid would be buried. Since they didn’t, well, you’ve got to find positives somewhere.

At first glance, the return yardage isn’t even the most noticeable Hofstra advantage in the boxscore. The Flying Dutchmen actually recorded twice as many first downs as New Hampshire (24-12), outgained the Wildcats 339-278 and dominated time of possession (42:07-17:53). But as the lopsided final score indicated, those were empty advantages.

Hofstra had to run almost twice as many plays as New Hampshire (92-48) in order to outgain the Wildcats by 61 yards. The average gain per play was a paltry 3.7, more than two yards less than the Wildcats’ average. The Flying Dutchmen committed seven turnovers, including a record-tying five interceptions by freshman quarterback Steve Probst, two of which were returned for touchdowns.

Of New Hampshire’s five touchdown drives, four took 69 seconds or less. And it could have been worse: The Wildcats scored on just two of the five drives they began immediately after Hofstra turnovers.

Of course, it also could have been better: New Hampshire’s first four drives ended with a fumble, a punt (off a three-and-out), a turnover on downs and an interception in the end zone. And Hofstra had the chance to wear out the Wildcats by running 17 straight plays from scrimmage and 30 of 33 players in a stretch spanning the first and second quarters. The Flying Dutchmen, down 7-3 early in the second quarter, were also stymied on a fake field goal attempt inside the New Hampshire 10-yard-line.

That’s pretty much the summary of the season right there: A lot of growing pains with some hints of better days ahead. All but 38 yards (17 yards rushing and receiving by Ray Bennett and 21 yards receiving by Phil Riley) were accounted for by underclassmen. And four of the top five Dutchmen tacklers Saturday are underclassmen.

The trials will likely continue Saturday, when Richmond—ranked seventh in last week’s coaches poll and eighth in the writers’ poll—comes to town fresh off what amounts to two bye weeks: A 48-0 win over non-scholarship Georgetown followed by an open date (and that’s what a “bye week” is, a bye is awarded only in the postseason). Haven’t been to Shuart Stadium since Homecoming—doesn’t it feel as if that happened a lot more than six weeks ago?—and the hopeful short-term optimism that was present back then has long evaporated. But perhaps we’ll see some of those flickers of long-term promise.

***
A couple other interesting football links:

—The Richmond Times-Dispatch does not think Virginia Commonwealth should add a football team, and it’s got nothing to do with the already unwieldy nature of CAA football (14 teams once Georgia State and Old Dominion join).

—Are the final two games of Iona’s season the final games in the program’s history? An interesting story from the Lynchburg News & Advance about the possibility that Liberty will have to scramble to replace Iona on its 2009 schedule. The Gaels, a victim of the demise of MAAC football—the conference disbanded after six schools discontinued their programs and two more jumped to another conference—are an independent this year and have yet to beat a I-AA team.

Email Jerry at defiantlydutch@yahoo.com.
Posted by Jerry Beach at 3:31 AM