If everyone else picked Delaware 5th, would you? 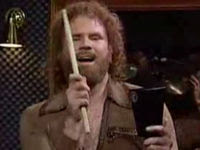 I've got a fever and the only cure is more predictions!

Getting ready to post these predictions reminded me of a couple interesting theories about blogging and writing I’ve read while absorbing pre-season information the last few weeks.

CAA Blog Daddy Michael Litos quoted a gentlemen by the name of Jeff Jarvis Nov. 5 when he declared that he’s following Jarvis’ advice this year by doing what he does best and linking to the rest. One of those links is the UNC-Wilmington page at the Wilmington Star News, whose UNCW beat writer, Brian Mull, wrote Nov. 12 that he didn’t forget to preview the CAA, he just thought his own preview would be “…redundant and unnecessary” given the previews that were already written by people such as Litos.

It’s obviously imperative to follow and recognize the rest of the CAA, but there’s no way I can approximate the coverage Litos and the beat writers provide the other 11 schools. Their institutional knowledge of those, well, institutions make them an invaluable resource who can tell you what’s going on at there far better than I ever could. I’ll be far better off if I mostly stick to prattling on about Hofstra.

Yet I also admire Mull’s restraint, because quite frankly, I love making predictions. As I noted earlier this fall, dog-eared copies of season preview annuals were my best friends every summer and winter as a kid. And my favorite part of the year as a magazine writer and editor was (and hopefully will be again) putting together baseball previews.

In fact, Loyal Reader Rob and I like predictions so much that it’s not enough just to make them once per football season. We have to do it some variation of it every single week by trading power rankings (which is, as Mike Florio of the always-entertaining Pro Football Talk noted earlier today, a cliché of the highest order…but also too much fun to resist).

So consider these predictions, then, a simultaneous nod to the philosophies of Litos and Mull and a scratching of a familiar itch. I don’t have any in-depth analysis of the Other 11, I leave that to Litos, whose previews are linked with each team. And clip and save—err, I mean, bookmark—so we can see how well (or, more likely, how poorly) I fared come March, when Hofstra finishes off a perfect CAA season. Muahahaha.

Also note these predictions were made last week and have not been influenced at all by the opening week of games.

1.) VCU (first preview): The whole season boils down to winning two more tourney games than last year. Not very fair, of course, but with the reigning CAA player of the year, the hottest mid-major coach in the land (Loyal Reader Jill thinks that’s the case, literally) and the sting of last year’s shocking semifinal loss in the tourney and subsequent screw job by the Selection Committee surely driving Anthony Grant’s team, the regular season won’t be a problem for the Rams. Is 17-1—a mark no team has ever enjoyed in regular season play—within reach?

2.) Northeastern: Five starters back and only one is a senior. For the first time since before Hofstra joined the NAC, Northeastern may be on its way to becoming a perennial power in its conference.

3.) Old Dominion (second preview): Experienced, well-coached and talented, like every year. Plus, you can set your clock to it: Five straight top-four finishes and first-round byes for the Monarchs.

4.) Hofstra: See this post for our preview from last Friday.

5.) Delaware: Monte Ross continues to lift the Blue Hens out of the David Henderson mess—which is fine by me. The season is more fun when DD-era rival Delaware is good.

6.) George Mason: Undeniable talent among the newcomers and if I had to pick a favorite for 2010-11, I’d pick the Patriots. But it’s 2008-09 and I have a hunch chemistry will be a disaster for at least a few weeks.

7.) William & Mary: There’ll be plenty of hunger here too among the returnees from last year’s near-miss club. If Litos says he’s underestimated the Tribe, well, that’s good enough for me to bump them up a couple spots.

8.) Georgia State: See George Mason, including the whole favorite for 2010-11 thing with this guy choosing the Panthers over a bundle of BCS powerhouses. A couple transfers this year is fine. But four?

9.) Drexel: As undermanned as the Dragons seem, I just can’t see a Bruiser Flint-coached team finishing last two years in a row. They’ll be tough and they’ll be scrappy and they’ll win a few 53-50 games.

10.) James Madison: Transitional years under the new guy are rarely pretty, but Matt Brady will have JMU in the upper half of the league sooner than later.

11.) UNC-Wilmington: Chad Tomko is fun to watch, but the cupboard is otherwise bare.

12.) Towson: Can’t shake the feeling that three suspensions before the opening tip is a bad, bad sign of things to come. And the last time a Pat Kennedy-coached team had a winning season? DePaul in 1999-2000—eight years and three stops ago.

Email Jerry at defiantlydutch@yahoo.com.
Posted by Jerry Beach at 11:38 PM

What, no pictures of Ron Burgundy playing jazz flute?

Matt Brady is a talented coach, but if JMU doesn't improve the way he wants it to within 2 or 3 years, and if and when Fran McCaffrey leaves Siena (Siena has the local press drooling more than usual [that is, more than the way fat, aging, white-guy sportswriters usually drool while leering upskirts at cheerleaders during every TV Timeout], and McCaffrey's been rumored for other jobs before), does Brady take a step back to the MAAC to go "home" and coach his alma mater?

You'd have to think he'd be over his resentment of not getting the job that McCaffrey won several years back.

The question is, would he jump backwards several RPI conference-ranking spots to coach a perennial top dog in the MAAC, or does he stick it out mid-table in a better conference at JMU (which last won a conference title when Beach and I were in college, has won only two CAA titles since 1983, and last played in the conference finals 12 seasons ago)?

Of course, this was all a set-up for me making this comment, apropos of nothing else: Brady has the worst hair of any man under 45 that I've ever seen.

Seriously, it's like a grown-out version of Gary Oldman's haircut in The Fifth Element.