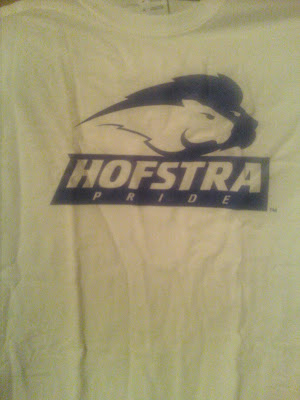 “Ahh, the first night of basketball season—when anything seems possible,” my wife the quote machine said as we waited for the first tip last night at Hofstra Arena.

Looking around the Arena during the Flying Dutchmen’s 68-50 victory over Old Westbury provided memories of what once was, and perhaps of what will be. The surprisingly decent-sized crowd of 2,508 for a game against a Division III foe—only 2,184 showed up to Hempstead for last year’s Hofstra-Stony Brook battle; can it be, is the optimism spreading?—inspired recollections of the sellouts against Mason in February ’06 and Old Dominion in the NIT quarterfinals three weeks later and stoked hopes of full houses for pivotal late-season CAA games.

Charles Jenkins flinging his body around with reckless abandon and filling up the box score was reminiscent of Loren Stokes, but with the reminder that he’s better built for such punishment. Jenkins had 24 points and was 6-of-8 from inside the 3-point arc (1-of-5 beyond it) as well as 9-of-11 from the free throw line.

Cornelius Vines evoked memories of Antoine Agudio by firing at will from outside (3-of-10 from 3-point land, 13 points overall), punctuating his 3-pointers with an Agudio-like fist pump (not nearly as annoying as this guy’s fist pump) and sporting the Agudio-circa-his-real-freshman-year long hair. (That, by the way, is a great test of someone’s Hofstra hoops fandom: Mention Agudio’s long hair. If he/she stares at you like you just suggested having Thanksgiving dinner at Dutch Treats? Not a real fan, or at least not as hardcore as you.)

Then there was Tom Pecora, who needed about 10 minutes to round into midseason form: Stalking the sidelines, filling the ears of the referees jogging by with friendly suggestions and producing his classic passive-aggressive “What? I’m not completely beyond The Line” pose by taking one knee near the scorer’s table and extending the other foot just beyond the coach’s box.

Greg Johnson played 26 minutes and effectively ran the point. Arminas Urbutis unveiled a new closely shorn hairdo that made him look, from a distance, like a dead ringer for Aurimas Kieza. He played like one, too: Eight points, six boards and three steals in 22 minutes.

Anything was possible…even beating out Sully Ray and his father for a T-shirt. That’s right. It’s 1-0, boys. Never mind that it’s a medium and I haven’t worn a medium T-shirt since like 1987, or that if I were to wear this just to taunt Sully Ray I’d look something like the guy on the left: 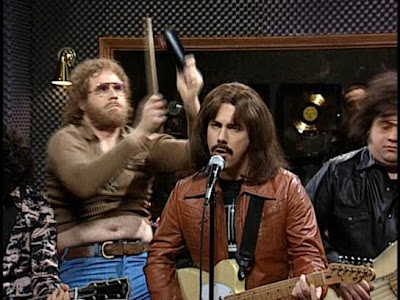 In which I gratuitously take advantage of any opportunity to reference Needs More Cowbell.
And never mind that there are 11 more home games for the Sullivans to remind me of their inherent advantages. For instance, Sully is a tri-athlete. I tried to be an athlete in high school, when I ran track because it was the only sport that didn’t cut anyone, and tried running at the beginning of my diet in January but quit after two days because I felt so pathetic and out-of-shape.

And his dad is 70 years old but with the agility, instincts and killer instinct of a man five decades younger. You’ve got to see this guy go for T-shirts. He’s a bad man. And I mean that in the most complementary way possible.

Where was I? Oh yes.

Of course, it was still the fourth Monday of November, so there were plenty of reminders it’s a long season and there’s still plenty of work to be done on the court (if not in the stands). This was the ultimate no-win game for the Flying Dutchmen—as in, no matter how much they won by, it wouldn’t be enough because Division I teams are supposed to trounce Division III teams—but Pecora didn’t have to get creative in finding ways to criticize his team’s performance.

It was a game with little flow or consistency on either end. Despite a clear size advantage, the Dutchmen only pulled down three more rebounds than Old Westbury (34-31).

And if Old Westbury shot just a little better—the Panthers shot just 35 percent from the field and 56.5 percent from the free throw line—then things might have gotten really hairy down the stretch. As it was, Old Westbury hung around long enough—down four with just over 12 minutes left, one of the Panthers players started extorting the crowd—that the wife mentioned it was beginning to feel a lot like Hofstra-UCLA, except Hofstra was the UCLA.

I’ll chalk some of the inconsistency up to the experimental nature of the game. As decent as Greg Johnson looked, let’s remember he was headed for the side of a milk carton after back-to-back DNPs in Charleston. The odds of him recording more minutes than Tony Dennison again, barring an injury to one of the three starting guards, are slim.

Darren Townes didn’t start, but played 29 minutes—more than either Urbutis (22 minutes) or Dane Johnson (13 minutes)—despite drawing four fouls as Pecora continued to mix and match with the big guys. Miklos Szabo had a quiet 15 minutes with no points and five boards.

And Nathaniel Lester (three minutes) and Zygis Sestakos (five minutes) continued to slide down the depth chart. Lester was yanked after a turnover late in the first half and Sestakos nailed his first 3-point attempt but missed his next two before both remained on the bench for the entire second half. Ditto for Mike Davis-Saab, who scored a point in two minutes in the first half. Walk-on David Vallins played the final 66 seconds while Greg Washington did not play and spent the game in sweats on the sidelines.

Now that the unofficial pre-season portion of the non-conference schedule is out of the way, we’ll start to get a better idea of what’s really possible—and what kind of work the Flying Dutchmen really have ahead of them—beginning Saturday, when the Dutch visit Manhattan. In the Bronx, of course, because that makes sense. I may start Bay Shore Community College but open it in Copiague.

(Sorry for the delayed posting tonight, should have just capped last night’s all-nighter by finishing this. Come back later Wednesday for a football-related post)

Email Jerry at defiantlydutch@yahoo.com.
Posted by Jerry Beach at 11:12 PM