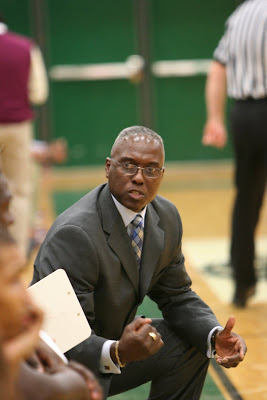 Those of us who went to Hofstra in the early 1990s remember the East Coast Conference as more of a curiosity than an actual conference and correlate it with the Flying Dutchmen’s days on the remote fringes of Division I. But Bernard Tomlin remembers the ECC as something far more legitimate and associates it with Hofstra’s first foray on to the national stage.

Tomlin was a senior starter on the 1975-76 Flying Dutchmen, who won the ECC to earn Hofstra’s first trip to the Division I tournament. The Dutchmen opened a 13-point lead on UConn in the first round of the 32-team tourney but lost, 80-78, in overtime.

Tomlin, who has been the men’s basketball coach and assistant athletic director at Old Westbury since 2001, comes back to Hofstra Arena tonight when the Panthers face the Dutchmen in the first meeting between the schools. We talked to Tomlin earlier this afternoon about his time at Hofstra, that memorable NCAA Tournament game, his position at Old Westbury and how close he came to being named Flying Dutchmen head coach in 1994. Thanks to Tomlin for taking the time to speak to us on game day as well as Old Westbury SID Harris Rappel for facilitating the interview.


What do you remember about your final game at Hofstra, the 80-78 overtime loss to UConn in the NCAA Tournament?

The one thing that I do remember is it was a very, very competitive game and we led pretty much all afternoon. And they made a nice run towards the end, tied it and we lost it in overtime. It was just a great experience. Back then,, there were only 32 teams in the tournament. So if you’re in the NCAAs, everybody was home watching. It was a lot of fun for Hofstra, that period of time.

The NCAA Tournament wasn’t quite the event back then it is today. What kind of publicity and attention did Hofstra get?

I think mainly because we were New York—towards the end of our season, we had every major newspaper, we had the TV stations and so on. The NCAA, locally, was St. John’s, maybe Manhattan but never really Hofstra. So the idea of having athletes that had the talent to play at that level, that was quite unique.

Do you ever think what if about the game against UConn—what if a shot had fallen in for Hofstra or fallen out for UConn?

You replay those things. I had a shot at the end that I turned into a jump pass. Never thought I should have shot it, because one of our bigger guys, Pat Kammerer, was wide open underneath. I had an athlete closing out at me—can’t remember [his name]—he got a little hand on the pass and [the ball] went up. But we gave it our best. It was one of those games where we left it all on the floor.

Along those lines: Given how UConn has become a perennial national power, do you ever think about what might have been for Hofstra as a program if the Flying Dutchmen won that game and went deep into the tournament?

All of those elite programs, they really kind of make the commitment across the board in terms of what they’re doing [with the program]. And you’re right—certainly, a Final Four run changes the face of a college. And we’ve see that happen with the mid-major programs. But it was a nice time. And then the following year, a large part of our group remained and we made another run [to the NCAAs, where Hofstra lost to Notre Dame 90-83]. So it was a nice two-year period. And I was actually out with my coach, Roger Gaeckler, this summer and we just were really happy to have the experience. Not many athletes or coaches get a chance to experience that.

What kind of profile did the basketball team have on campus?

Because we were a young program, I think people knew that we had good talent. My senior year, we went to the national tournament. But I think everybody looked at us and said ‘Well, they have some talent, but will they ever be able to meld as a team?’ So we didn’t have the big crowds. The biggest crowd we got was the reception we got [after returning] from Philadelphia after we had won the ECC championship.

Thirty-odd years later, it’s still a challenge to get people on to the Hofstra bandwagon. Why do you think that’s the case?

The problem you have in the metropolitan area is you have the pro franchises and you just have so much entertainment to compete with. So until a team really gets hot and people start reading about them, it’s hard to generate a following. I know locally, even with my own family, I’m competing against the Nets and all the other teams that are playing during the same time.

You were among the finalists for the Flying Dutchmen head coaching job in 1994. What do you remember about that process and how close do you think you were to getting the position?

All through the process, I was told that—and I was unfamiliar with this terminology—I was in the “catbird seat.” I said ‘What does that mean?’ [laughs] But, you know, it’s a gray area when you’re competing. And obviously, so many people were involved in the process. And I think they’ve all made good choices. And I’ve been really happy with what I’ve been able to accomplish as a small college coach. It was a real honor to even be considered.

In addition to coaching the men’s basketball team, you’re also the assistant athletic director at Old Westbury. What goes into that job and how did you move into athletic administration?

I work very closely with all the teams. We’re involved in the budget process right now. We’re trying to upgrade our programs. Just added two new sports, we have women’s soccer for the first time. We also have men’s and women’s golf. It’s pretty much more of the traditional role of a small college assistant athletic director or administrator.

I had always been pretty much a coach, and when I worked at Stony Brook, I was a full-time coach. Obviously, Division II and I, there’s a lot more responsibility as far as recruiting nationally, fundraising, those kinds of things. Small-college coaches that work full-time usually have numerous responsibilities and they wear one or two hats.

What are your thoughts upon returning to Hofstra? Do you remember the last time you coached there?

Wow. Memory lane. [laughs] I’m not sure what year, but when I was at Stony Brook, we played there. I think this was Speedy’s junior year [note: Hofstra hosted Stony Brook in 1996 and 1997, Claxton’s freshman and sophomore years]. You could see that team was just about to take off. They had so many good athletes and Jay was doing a great job. You’re always anxious because you know that you’re going against a good staff and you know these guys do a great job recruiting and a really good [job of] coaching.

Lastly, what do you plan to say to your guys before playing Hofstra tonight?

Just go out and compete. A lot of times, what happens in these games is the same guys you play against in the summer league games now are on the other side in a Division I jersey. So you kind of have to work through that. Obviously, they have some physical advantages with the size and the athleticism. But a lot of times, our athletes are a lot more comfortable than the coaches because they know what it’s like playing against these players. It’s not in a strict environment, but they’ve had that experience before.

Email Jerry at defiantlydutch@yahoo.com.
Posted by Jerry Beach at 6:02 PM