Jay Wright and a perfect first day at Hofstra 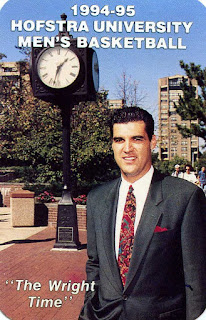 It sure was. (Also yes I will post this forever)

April 14, 1994 was one of those perfect days that seem so more plentiful in the rear view mirror. I recall it being a sun-splashed day, but Jay Wright says it was raining on his way to Hofstra from the airport, so since he’s Jay Wright and I’m not, we’ll go with his recollection.

Regardless of the actual weather, it was one of the brightest days in the history of Hofstra University. Believe it or not, the arrival of Wright as men’s basketball head coach was overshadowed by the news, announced at the same time, that Hofstra had been invited join the North Atlantic Conference. You might know the NAC better today as the America East, i.e. the league I always make fun of on Twitter.

But there was nothing to mock about the NAC (even if back then it did have a tournament in which every game was played at the higher seed), not when it was tossing Hofstra a lifeboat off the sinking ship known as the East Coast Conference, which was a league I may or may not have made up but which was fully submerged by the time the Dutch athletic program was rescued.

It was also the best day of my fledgling writing career. We got word the day before, as we were laying out that week’s edition, that two big announcements were coming at the University Club on Thursday. But we couldn’t confirm either one, and we were obsessed with the idea that the school was announcing the news on Thursday so that Newsday would get the scoop and we’d be relegated to scraps a week later. Even back then, I had an enormous ego.

So our editors in chief made the executive decision to send everything to the printer except the front page of the sports section. (Our back page had a head shot of athletic director Jim Garvey with the words “Major athletic announcement” next to it, just in case they were calling us there to tell us they ordered a lot of new baseball and softball bats) After attending the press conference, I’d race back to the office, write Hemingway-esque prose and then one of the editors would drive the page to the printer.

The paper hit the newsstands that night with the story from the afternoon’s press conference, and I fell asleep with images of Newsday’s angst-ridden editors wondering how the kids from The Chronicle had beaten them to the punch. Reality: They had no idea who we were.

So after spending all night laying out the sports section and cold-calling hotels, I went back to my dorm room, showered, shaved, put on a shirt and tie and headed to the University Club for the big announcement. I hadn’t slept since Tuesday and I was so high on adrenaline, I felt like I might never need to sleep again.

And this was before I met Jay Wright.

We thought the NAC announcement was the bigger news, but Wright owned that room the moment he walked in. People immediately gravitated towards him, in a way I’d never seen before and haven’t seen much of since.

Look, college basketball is about salesmanship. But nobody ever made the consumer feel more responsible and invested than Jay Wright. He remembered first names the first time he heard them, and never forgot them.

It was day one of a very, Very, VERY long rebuilding process, but we immediately believed him when he said he would awaken a sleeping giant. We had just won a conference that no longer existed and were among the bottom 10 programs in Division I but we were going to go to the NCAA Tournament under this born-for-stardom guy.

The man walked into a desert toting water coolers on his shoulders, but he could have offered us sand and we would have been running at him with our arms extended. We knew he’d be great for Hofstra, and that he’d be great upon leaving Hofstra, but he’s managed to exceed all our expectations for 22 years now. How often does that happen at Hofstra?

His greatest achievement, at a school and in an industry that specializes in ugly goodbyes? He might be the one guy whose smile was as wide and genuine on the day he left as the day he arrived.

The bridges smoldered behind Tom Pecora and Mo Cassara’s departure feels even more embittered now than it did three years ago (we won’t mention the guy in between, even if Wright was credited with helping lead him here—we forgive you Jay). At this point, an eventual Butch van Breda Kolff-ian exit for Joe Mihalich—smiling even as he’s nudged towards the door—would qualify as a giant upgrade.

But Wright’s exit was even more perfect than his entrance. He went out after a second straight America East title, and didn’t leave for Villanova until 12 days after an NCAA Tournament loss to UCLA. Everyone was already prepared for the inevitable, but we had a little time to savor what we were going to lose.

Since leaving, he has done nothing but fill Hofstra alums with pride. He has never been “too big” for Hofstra, instead always speaking well of the school and acknowledging its role in his career.

He built Villanova in the same methodical and sustainable fashion he built the Flying Dutchmen, and now he’s in the Final Four for a second time and with a chance to win a national championship. Whether he does or not, we will always brag about him as if he is our own and say we knew him from day one, a perfect day whose shine has yet to dull.
Posted by Jerry Beach at 5:30 PM No comments: 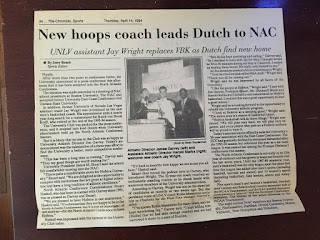 Read all about it.

After more than two years in conference limbo, the University announced at a press conference this afternoon that it has been accepted into the North Atlantic Conference.

In addition, former University of Nevada Las Vegas assistant coach Jay Wright was introduced as the new men’s basketball coach. His appointment ends a nearly year-long search for a replacement for Butch van Breda Kolff, who retired at the end of the 1993-94 season.

The University Club was packed for the press conference, and it erupted into loud cheers when University cheerleaders held up the North Atlantic Conference banner.

But it is likely that no one in the Club was as happy as University Athletic Director Jim Garvey. Today’s announcement was the culmination of a three-year effort to find the University a better, more competitive conference.

“This has been a long time in coming,” Garvey said. “They say good things are worth waiting for.”

“This is quite a comfortable move for Hofstra University,” Shuart said. “We are delighted at the opportunity to compete with institutions that are great at higher education and have a long tradition of athletic excellence.”

North Atlantic Conference Commissioner Stuart Haskell, who has been in contact with Garvey since 1991, was as pleased as Garvey and Shuart.

Haskell was impressed with the turnout at the University Club today.

“It’s hard to describe how happy we are to see you all here,” Haskell said.

Shuart then turned the podium over to Garvey, who introduced Wright. The 32-year-old coach receive an enthusiastic standing ovation as he shook hands with numerous members of the University administration.

According to Garvey, Wright was not on the short list of candidates as recently as two weeks ago. But the persistent voice of UNLV coach Rollie Massimino and a trip to Charlotte for the Final Four changed Garvey’s mind.

“I’ve known Rollie Massimino for many years, and he kept mentioning Jay,” Garvey said. “I kept telling him [Rollie] that we had seen enough coaches and we had narrowed it down to a core of finalists.

“But Rollie kept persisting and calling,” Garvey said. “So I decided to meet with Jay for what I thought would be 30 to 50 minutes during my stay in Charlotte. I ended up staying three hours. He really sold himself to me.”

All the attention seemed a bit overwhelming to Wright.

“I feel like the first pick of the NBA draft,” Wright said. “Thank you all for coming out.”

Wright said he was impressed by all facets of the University.

“I like the people at Hofstra,” Wright said. “I met with Jim Garvey, President Shuart, Mr. [Richard] Block and Harold Starks and I sensed a real commitment to Hofstra basketball. I realized this was a great opportunity to lead a great school.

Wright said he is looking forward to the opportunity to rebuild the University athletic program.

“I look at Hofstra as a sleeping giant,” Wright said. “The metro area is a mecca of basketball talent.

“Hofstra basketball will do three things,” Wright continued. “We will play very hard, we will play very together, and every player who puts on a Hofstra uniform will be proud to wear it.”

Today’s announcement officially ends the University’s 20-year association with the East Coast Conference. The ECC had gradually declined in status and disbanded after the 1991-92 season but reformed this year as a six-team league. It was ranked last among the 33 major Division I conferences this season.

The North Atlantic Conference is currently in its 15th year of existence and has grown in leaps and bounds over the last seven years. Until the 1987-88 academic year, men’s basketball was the only league sport but since that time the league has added nine mens sports (including baseball, lacrosse and soccer) and 10 women’s sports (including basketball, field hockey, soccer and volleyball).