For Chrebet, immortality was just a short walk away 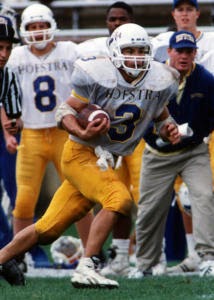 Wayne Chrebet began his professional football career in the spring of 1995 by walking the few hundred feet that separated Colonial Square, his dormitory at Hofstra, from the Jets’ facility located just beyond the Physical Fitness Center.

But it didn’t take Chrebet nor his former Hofstra teammates long to realize he might be walking his way right into the NFL.

“I think it was spring festival (weekend) and we were all hanging out,” former Hofstra linebacker Jim Shannon said recently, referring to the annual massive weekend-long party that went on at the intramural fields across from the dormitory towers. “The Jets had their minicamp and of course they did coach (Joe Gardi) a favor by letting Wayne come over.

“He’s just walking up. He walks up and he’s like ‘Hey.’ Because he was just Wayne back then. Wayne Chrebet and we all loved him. We thought he was a great dude. Did we seriously think that he was going to make an NFL team? Hoping for it, but nobody really knows.”

Yet Chrebet was already, in the parlance of Gardi, running with the big dogs.

“Then it was the next day, more of the same stuff. Then camp ends and he gets an invite to training camp.”

Chrebet parlayed that invite into an 11-year career that ranks as one of the finest in Jets history. Chrebet, one of only 18 players to spend at least 11 seasons with the Jets, ranks second in the franchise record book in receptions (580) and third in receiving yards (7,365) and touchdowns (41).

Chrebet will take his place with the Jets’ all-time greats tonight, when he and former owner Leon Hess are inducted into the Ring of Honor at halftime of the game against the Dolphins.

“Still hasn’t sunk in,” Chrebet said last month during an autograph signing at Victory Sports Bar in East Rutherford. “People are like ‘They should retire your jersey, no one’s worn it.’ That’d be cool, but this is—I’m starting to really get blown away by it. When I’m up there and I see it—yeah, I’m not gonna be able to talk. I can barely talk about it right now.”

An career in the NFL wasn’t even a remote consideration for Chrebet during his first two seasons at Hofstra, during which he caught just 36 passes for 309 yards and six touchdowns for a non-scholarship program transitioning from Division III to Division I-AA.

He established himself as the Dutchmen’s no. 1 receiver in 1993, when he caught 57 passes for 788 yards and nine touchdowns in just nine games. His breakout senior season might never have happened, though, if not for the arrival of innovative offensive coordinator Mike McCarty, who installed the spread offense that is so commonly seen today.

“The moved me from inside to the outside and that was the big difference,” Chrebet said. “I had more one-on-one coverage.

“They had a play called ‘Z Heads.’ And I was the Z, which meant we’re throwing it to you, no matter what. If you’re covered? No matter what happens, we’re throwing you the ball. And we’re going to do that once a quarter, just to keep them honest. And we just hit it all the time.”

Chrebet opened the season Sept. 3 by catching two passes—touchdowns of 70 yards and 25 yards—in a 41-0 rout of Butler. On Sept. 17, he caught five passes for 206 yards and a school-record four touchdowns in a 30-20 win over Fordham.

Two weeks later, as the unbeaten yet unranked Flying Dutchmen prepared for their Homecoming game against Yankee Conference power New Hampshire, ex-Jets star Marty Lyons—who was the analyst for Hofstra football telecasts on SportsChannel—suggested to a scout who was planning to attend the game to check out New Hampshire players to keep an eye on Chrebet instead.

Chrebet ended up with five receptions for 125 yards, including a spectacular diving catch in the end zone for Hofstra’s second touchdown in a 28-6 upset win.

“There was a scout that came and saw the guys from New Hampshire,” Chrebet said. “Marty was just like ‘Well, what about Chrebet? You need to take a look at him.’ I had the Fordham game and these [other] games and people are saying, hey, maybe you have a chance. And then I was like, hey, maybe.”

Chrebet ended his Hofstra career in unbelievable fashion Nov. 12, 1994, when he caught 14 passes for a school-record 245 yards and five touchdowns in a 41-41 tie against Delaware. The five touchdowns tied the I-AA record at the time, which was shared by Lehigh’s Rennie Benn and a guy from Mississippi Valley State by the name of Jerry Rice.

“Whoever they put him against was outmatched—in that last game and the whole season,” Hofstra quarterback Carlos Garay said.

“I started getting some offers to do some workouts—not the combine—and I talked to my parents and we got an agent,” Chrebet said. “They said “Listen. You get your degree, we’ll give you two years to maybe get into the Canadian league or some league.’”

And if it didn’t work out?

By the spring, Chrebet had three serious suitors willing to sign him to a free agent contract: The Saints, Bengals and the Jets. Nobody could match the opportunity offered by the Jets, whose top two receivers from 1994, Rob Moore and Art Monk, were traded and allowed to leave s a free agent, respectively.

Nor could anyone else match the convenience of going to camp with the Jets.

“I was like, well, the Jets have nobody [and] I don’t have to leave the dorms,” Chrebet said.

On Apr. 24, 1995, Chrebet made the walk between Colonial Square and the Jets facility for a tryout. Wide receivers coach Richard Mann threw between 50 and 60 balls to Chrebet, who dropped just three passes.

“It was a ‘wow’ kind of a workout,” Jets head scout John Griffin said afterward.

“I guess I feel like a king for a day or something,” Chrebet said while attending a Hofstra lacrosse game on Apr. 25. “This is definitely a shock for me. I never planned on it. Whatever happens from here on out is just icing on the cake.

“I’m going full force from here, and if I don’t make it, it’s not because I didn’t try.”

By the end of the summer, Chrebet had vaulted from the very bottom of the 11-man wide receiver depth chart to the top. Reporters from around the country flocked to Hempstead to chronicle the feel-good story of the kid from Hofstra now starring for the NFL team that was headquartered at Hofstra.

The attention often seemed to bemuse the soft-spoken Chrebet, who relied on and reinforced his familiar Hofstra ties throughout his NFL career. As a rookie, he continued to live with friends just west of campus in Hempstead and often attended Hofstra home football games, which were played on Friday nights.

Chrebet married his college girlfriend, Amy, in 2001. A few months earlier, Chrebet was among those standing on the court at Hofstra Arena, smiling and taking in the scene, when the Flying Dutchmen basketball team beat Delaware to win the America East title and the program’s first NCAA Tournament berth in 23 years.

On the field, Chrebet continued to cement his status as one of the greatest undrafted free agent signings of all-time. He outlasted nine wide receivers who were drafted by the Jets from 1995 through 2003—including Keyshawn Johnson, the mouthy wideout who authored a book following his rookie season in which he dubbed Chrebet the “team mascot.”

From 1996 through 2003, the Jets signed at least eight free agent receivers, all of whom were gone by the team Chrebet began his final NFL season.

“That was a kid who got the chance and made the most of it,” Shannon said.

His reliability, especially on third down catches over the middle, made Chrebet a favorite target of 13 different passers—including running back Curtis Martin, whose two career completions were both touchdowns to Chrebet.

“The whole [senior] season is really how he played his whole career with the Jets,” Garay said. “Just a notch above the rest. I’m glad he did so well. I knew he was going to do well. As long as they threw the ball near him, he’s going to catch it.”

Through it all, Chrebet remained the most popular player with Jets fans, who made his number 80 jersey one of the NFL’s steadiest sellers.

“Go to the Jets game every weekend,” Garay said. “There’s more [people in] his jersey walking around than current players.”

Chrebet’s seemingly storybook career, of course, came with dark consequences. He suffered at least eight documented concussions, including two at Hofstra—one of which forced him to miss a game during the 1993 season and the second of which left him inactive for the spring game in 1994.

“We were genuinely concerned about Wayne and whether or not he would be healthy enough so that we could count on him this season,” Gardi said following the 1994 season.

With the Jets, Chrebet missed a game in 2001 due to a post-concussion headaches and the final eight games of the 2003 season after he was knocked out against the Giants on Nov. 2. He also missed a playoff game due to a concussion following the 2004 season.

His final reception on Nov. 5, 2005 symbolized his career, the fearlessness with which he played and the toll it exacted. With the Jets facing a 3rd-and-5 and trying to complete a furious fourth-quarter comeback against the Chargers, Brooks Bollinger found Chrebet for a six-yard gain and the 379th catch for a first down of Chrebet’s career.

But the back of Chrebet’s head bounced off the Giants Stadium turf as he was tackled. He remained motionless, staring at the sky, before he was helped off the field. After the game, Chrebet was unable to take off his uniform without assistance from a trainer.

Chrebet battled depression in the first few years following his retirement and admits to battling headaches and memory loss. During interviews, he acknowledges, with a poignant casualness, that his memory is not what it used to be.

But he said last week at the Jets’ facility that he has more good days than bad days and no regrets over the career path he chose.

“Yeah, it’s been a long journey,” Chrebet said at Victory Sports Bar. “But getting to play and doing what I did, making the Ring of Honor and knowing that my name’s up there forever?”

Hofstra will be well-represented when Chrebet’s name takes its permanent place along the third deck at MetLife Stadium. Garay, with whom Chrebet has remained best friends for the past two decades, will be in attendance along with numerous other college friends from on and off the field that Chrebet will host during a private pre-game barbeque.

Chrebet doesn’t know what he’ll say or how he’ll respond once the cheers begin. But at some point he knows he’ll think of Hofstra, and the beginning of a path that took him a few hundred feet down the road and farther than anyone could have imagined.

“They’re a part of it—people that I knew from way back [that] say ‘I remember watching you,’” Chrebet said. “This journey started there. And everybody has bits and pieces of the story.”

(All quotes from 1994-95 first appeared in The Chronicle, Hofstra’s student newspaper)

Email Jerry at defiantlydutch@yahoo.com or follow Defiantly Dutch at http://twitter.com/defiantlydutch.
Posted by Jerry Beach at 4:38 AM No comments: