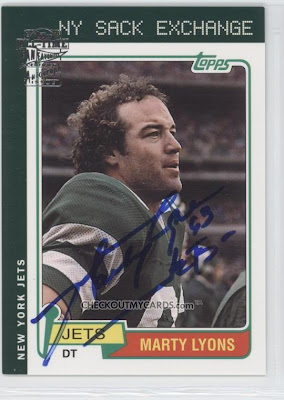 Bring back this guy!
When it comes to recommended ways to spend a Saturday, I’m pretty sure sitting home with a damp washcloth applied to a jaw still throbbing from a root canal ranks somewhere below, well, a whole lot of things. Not that I wasn’t planning to watch the Flying Dutchmen football finale against UMass on YES, but I was hoping to do so later in the evening (what did we do without TIVO, anyway?) and without feeling like a construction crew was administering a jackhammer to the left side of my mouth.

But there I was in the recliner Saturday, the Novocain wearing off as I watched the Dutchmen fall to UMass 28-14 (in front of a crowd of 5,108 that apparently sat out of view of the television cameras) and picked nits with the CN8 broadcast crew.

(Read the coverage from The Springfield Republican...and The Worcester Telegram...and The Boston Globe. That’s right: Three papers covered the game. Maybe that’s a byproduct of UMass winning the I-AA title in 1998 and making four subsequent appearances in the tournament, but I’m not sure Hofstra would get three papers out to Hempstead if it advanced to and hosted the I-AA championship game.)

Aside from screaming at Chris Berman to come up with new, non self-referential material, I’m not a big fan of criticizing broadcasts and broadcasters. Going live without a net without the ability to highlight and delete anything is an art form I admire, and plus, I enjoy public speaking even less than I enjoy a root canal. In addition, I hate to be That Guy who expects broadcasters to have encyclopediac knowledge of a team whose game is likely to draw less than one-tenth of one percent of the viewing audience.

But geez, even if my teeth—and my fame—were impressive enough to earn me mention on this list, it would have been difficult to not long for the days when Hofstra paid SportsChannel to broadcast the games and Carl Reuter, Marty Lyons and Barry Landers were weekly presences at Pizza With Joe.

The following gripes all occurred within the first minute—that’s right, the first 60 seconds—of the CN8 telecast.

Entering Saturday, the Flying Dutchmen had played 11 games with their new helmet. Which, of course, replaced this helmet, which was all of one year old, but that’s neither here nor there. So why was the first Hofstra image in the pre-game package a picture of the old helmet? Cripes. If you’re going to go old school, go all the way.

The narrator of the brief pre-game package referred to “…the powerful offense of coach Dave Cohen” that has produced the program’s “…best rushing numbers in seven years.” Sure, the Dutchmen exceeded 40 points in a game four times this season for the first time since 2004. But they were also shutout twice and scored 16 points or less six times in 12 games.

The accolades about the rushing game are true: Hofstra finished the year with an average of 167.4 rushing yards per game, the best performance since the 2001 team averaged 190.6 yards per game. Alas, the Dutchmen had to run the ball because quarterback was a revolving door and they struggled to do anything in the air: The average of 176.1 passing yards per game was the lowest total since 1996 and the second-lowest average since the program began moving to I-AA in 1991. The 343.5 yards of total offense per game is the fourth-lowest in the I-AA era.

I guess the broadcast got better from there, even if Hofstra provided the familiar mix of encouragement and frustration. UMass looked as if it was going to put a James Madison-type beating on the Dutchmen when it scored 21 points in the first quarter, but the Dutchmen didn’t allow another score until five minutes into the fourth quarter and ended up outgaining the Minutemen 355-315. It was a legitimate advantage, too: Hofstra ran just nine more plays from scrimmage than UMass.

The Dutchmen coaching staff, blasted all season for its conservative play-calling, pulled an unexpected trick out of the bag when it called for a fake punt inside the Hofstra five-yard-line early in the fourth quarter.

The kids were more than all right on both sides of the ball. Freshman quarterback Steve Probst and sophomore Everette Benjamin combined for 150 yards and two touchdowns on just 27 carries while redshirt freshmen Chris Edmond and Greg Melendez combined for 23 tackles.

But the Dutchmen also could have done a lot more than hang with a perennial powerhouse. That fake punt led to the longest drive of the season—an 18-play, 87-yard march that put Hofstra on the doorstep of the game-tying score—but it ended with Benjamin losing a fumble inside the 15-yard-line. Benjamin ended the next drive by fumbling out of the end zone as he tried to extend for a score that would have pulled the Dutchmen within seven with just over four minutes left. Appropriately, that turned out to be the final offensive snap of the season for the Dutchmen.

Overall, the Dutchmen committed five turnovers and scored on just two of their five trips inside the red zone. The defense surrendered 236 yards rushing and gave up an average of 192.8 yards rushing per game, the highest total since 2002 and the fourth-highest figure sine the move to I-AA.

Next season surely begins today for Dave Cohen, who knows the Dutchmen need a winter, spring and summer in the weight room in order to compete in the CAA—which, for the second straight year, sent five teams to the 16-team I-AA tournament. And next season will likely define Cohen’s tenure. Hofstra is 13-21 under Cohen, including 5-12 since a 6-0 start last year.

The growing pains of this season are worth it if the Dutchmen get back into playoff contention. If not? Might be time to start over again in 2010.

Speaking of next season: It finally arrives tonight, at least at the Hofstra Arena, when the Flying Dutchmen return home for the first time in 267 days and host Old Westbury. Yeah, we probably won’t be able to glean much from will hopefully be a glorified scrimmage against a Division III foe, but glory of glories, basketball is back.

Check back tomorrow for a recap of the game. And if you’re going, see you there. I’ll be the guy yelling for Jeff Fox to get some PT.

Email Jerry at defiantlydutch@yahoo.com.
Posted by Jerry Beach at 6:40 AM