Soccer, The Hardy Boys and a whole lot in between 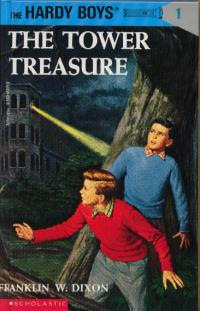 Do you think the Hardy Boys could have gotten to the bottom of the 2006 NCAA Tournament scam? I do.

Big night tonight for the soccer teams at Hofstra as the Flying Dutchwomen advanced to the CAA championship game by upsetting top-seeded William & Mary, 3-2. The Dutchwomen will play for their third league title (and NCAA Tournament berth) in the last four years Sunday when they take on sixth-seeded Northeastern, which also pulled off an upset Friday by knocking off second-seeded James Madison. Hofstra lost to Northeastern, 2-1, eight days ago.

The men’s soccer team, meanwhile, reached the CAA tournament by edging regular season champ UNC-Wilmington, 1-0, in overtime. The Flying Dutchmen, whose streak of three straight CAA crowns and NCAA bids was snapped last year, will be the sixth and final seed and will play third-seeded George Mason in the first round of the tourney Tuesday.

A couple other links and some reader emails before the weekend:

—With the men’s and women’s basketball teams scheduled to begin play a week from tonight, the Hofstra sports information department has posted the previews for each squad. These, presumably, will run at the front of the media guides. (Oh boy oh boy oh boy, it’s almost time for the men’s basketball media guide…like Christmas six weeks early. I wish I was kidding)

The Richmond Times-Dispatch previews tomorrow’s Richmond-Hofstra football game. The Spiders (great nickname, unless you found nothing entertaining about this movie) likely need to win out in order to reach the I-AA playoffs, so coach Mike London is saying all the right things about how his club can’t overlook the reeling Flying Dutchmen, who have lost three straight games and might be 0-4 in the CAA if not for a missed Rhode Island PAT in the last minute and a subsequent Cory Christopher-led drive for a game-winning field goal Sept. 20.

Dave Cohen, meanwhile, has two assistants who used to be on the Spiders’ staff, and he’s saying all the right things about how Richmond is borderline unbeatable. “I’m asking ‘Well, are these guys as good as they look?’” Cohen told the Times-Dispatch. “And the answer continues to be ‘Yes. Yes, yes, yes.’ So it’s not helping my confidence.”

Mine, either, I guess. I’d be happy if Chris Lang’s prediction in the Lynchburg News & Advance is accurate.

(This seems like as good a place as any to mention I’ve always been partial to Richmond since its men’s basketball team became the first no. 15 seed to ever beat a no. 2 when the Spiders knocked off Syracuse and sourpuss Jim Boehiem in 1991. Good times)

—Michael Litos had some CAA men’s hoops news this afternoon, including the suspension of three Towson players. That’s not a good sign of things to come for the Tigers: The Flying Dutchmen opened the 2002-03 season without Rick Apodaca and Wendell Gibson, each of whom were suspended 14 games for smoking marijuana, and went 2-12 in those games on their way to an 8-21 finish. It seemed like a ludicrous overreaction then and it seems like a ludicrous overreaction now, but what do I know?

Now for some mail from my Loyal Readers. Rob writes in to correct my Freak Formal post from a week ago. He says it was his ankle, not his knee, that he wrecked playing football before the Freak in 1994. Defiantly Dutch apologizes for the error and also for forgetting to mention that Rob went as Kurt Cobain, complete with a T-shirt that read “Corporate Magazines Suck.” Awesome. The things that grow fuzzy with time.

Publisher Cat notes an interesting Associated Press story about the sports world’s reaction to the election of Barack Obama and wondered if Hofstra can “…line up a non-league game against Oregon State at the site of the third debate?”

Oregon State, of course, is coached by Obama’s brother-in-law, Craig Robinson. The Flying Dutchmen have never played Oregon State—not even during the long road trip that was the 1992-93 season, more on that shortly—and have played only four games (none at home, of course) against Pac-10 foes. Hofstra is 0-2 against both California and UCLA, the latter of whom knocked the Dutchmen off in the 2001 NCAA Tournament.

Somewhere here I have a photo of the scoreboard that shows Hofstra leading at the eight-minute TV timeout in the second half. At that point, my future wife and I were wondering just how the hell we were going to afford staying two nights in North Carolina. Turned out the Dutchmen didn’t score another point and we had nothing to worry about, except a really long ride home. Let’s move on.

In addition, a game against Oregon State would be doubly historic since, according to a perusal of Hofstra media guides, only one Hofstra squad has ever played Oregon State in anything: The volleyball team fell to Oregon State in three games in 1992.

Next up is Gonzo Hofstra Fan, who reminds me of my first-ever visit to Hofstra by agreeing that a Final Four run will draw more future students than a presidential debate:

"When I was deciding between Hofstra and other LI schools such as Adelphia and Post, one of the biggest factors in steering me to HU was the fact that someday I hoped I would be able to watch my alma mater in the NCAA Division I men’s basketball tournament, an opportunity I wouldn’t have had at any other LI school at the time. [Yeah, I’m so old that Stony Brook was still D-3 back then]"

Depressing. So am I. Gonzo’s email is particularly timely because I’m pretty sure it was this weekend 16 years ago—it was either the first or second weekend of November—when my parents and I took our first-ever trip to Hofstra for the fall open house. At that point, I was still pretty unsure where I wanted to transfer to after I finished community college back home.

Hofstra was the first D-I school we visited. It was one of those sparkling fall days that made the campus look particularly graceful. Dempster Hall blew my mind. Hofstra had me hook, line and sinker by lunch.

I remember walking out of the Student Center and looking at the clock when my dad asked if I was so quiet because I was unhappy.

We cancelled a trip the next weekend to Adelphi and I applied to Hofstra, which somehow accepted me. Of course, had I recognized at the time that being an independent—which Hofstra was in basketball that season—was almost as bad as not being in Division I at all, I might have done something different. Like apply to UConn. Shudder. It’s easy to be a fan there.

We’ll close out the mailbag with Cake Sitter—don’t ask, I can assure you that you do not have the stomach for an explanation of that nickname—who was frightened to learn read that he and I both devoured Matt Christopher books as kids. He also writes to inform us how “…amazing [it is] that Matt Christopher…is still writing children’s sports books, despite having departed this mortal coil 11 years ago. I’m very much alive and can only imagine ever thinking about approaching his prolific output.”

Matt Christopher’s work, both during and after his time on this planet, is impressive. According to some quick math at his official website, he’s penned 136 books. No idea how many have been penned by his estate since his death, but I can’t imagine the ratio of his books/estate books is as lopsided as that of V.C. Andrews, the gothic author who wrote eight books before her death in 1986 yet whose estate has written 60 books under her name since.

But neither Christopher nor Andrews can even approach the output of Franklin W. Dixon, who, according to Wikipedia (which is never wrong), has authored a mind-boggling 435 Hardy Boys books, including the first real book I ever read. Not bad for someone who, to borrow Cake Sitter’s phrase, departed this mortal coil 31 years ago.

Unlike Matt Christopher and V.C. Andrews, there never was a Franklin W. Dixon, who was the pseudonym originated by the Stratemeyer Syndicate in the late 1920s. McFarlane was the first of many Franklin W. Dixons. By the way, did you know the W. stands for win? I kid you not. Edward Stratemeyer wanted every pseudonym to have some sort of inspirational meaning. Hence Nancy Drew author Carolyn Keene, Bobbsey Twins author Laura Lee Hope and Tom Swift author Victor Appleton.

I’ve had this information in my head for more than 20 years and now, finally, I’m able to use it on a blog about Hofstra sports! God bless the Internet.

Email Jerry about Hofstra sports as well as the Hardy Boys at defiantlydutch@yahoo.com.
Posted by Jerry Beach at 11:53 PM

Funny, I recently found my white College-For-A-Day T-shirt from my own visit as a high school senior. But I still can't find my Freshman Guide, which included photos of new students from their respective high school yearbooks. I believe Nonsense once parodied this as something along the lines of "Incoming Meat Market Guide."

When I think of Richmond and Hofstra, I think of a road trip a buddy and I took to see the Dutch play the Spiders in hoops, somewhere in the lost years between 1991 and 1994. We overslept and missed the fan bus (the official excuse we gave was got the departure time wrong, and I think that was technically true), but determined to continue on our trip (we were covering it for the school paper), we hopped on an Amtrak to Richmond, sharing a 12-pack with a total stranger on the way, and somehow made it to the hotel (the game wasn't until the following night, I think).

I want to say this was the same road trip that we somehow fit in a tour of the Phillip Morris plant, where we received free packs of Marlboro Mediums. I think that was also the site of the last place I ever bought a carton, which probably cost less than 15 bucks, and maybe closer to 10. Good times indeed.

Actually, when I hear the Spiders nickname, I think of Goodfellas and Joe Pesci taunting a young Michael Imperioli as the doomed "Spider."

Of course, on TNT, that scene is about 5 second long (in fact, the entire TNT "edited-for-television" version of Goodfellas concludes before the first commercial break).

Yeah, I watched that movie a lot.

@cake sitter: Or was the spoof "Freshmeat Market Guide"?

I'm getting too old to remember this shit (either that, or the Genny Cream Ales are finally taking their toll).