Get your Freak Formal on! 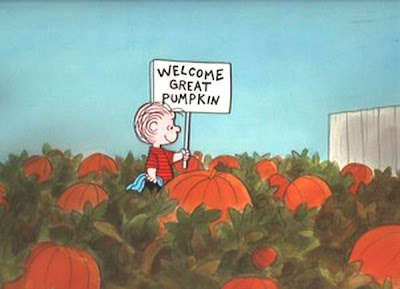 While the rest of campus parties at the Freak Formal, Linus Van Pelt heads to the fields across the street from Hofstra USA to wait for the Great Pumpkin.

We’re not all about Hofstra sports here at Defiantly Dutch. We’re also about the Hofstra culture. Not the Cultural Center conferences on American icons or the Shakespeare Festival or any of the other performances at the John Adams Playhouse or even our kickin’ arboretum or anything like that.

No, today we are here to celebrate the true essence of Hofstra: The Freak Formal.

Nothing says Hofstra quite like the Freak, the annual Halloween party that, if 1993 through 1995 are any indication, will be held tomorrow night at Hofstra USA. Or maybe it was always the Saturday before Halloween, in which case this is hilariously late even by my standards.

(Hey what the hell else am I going to blog about today? Football? I can’t even muster up fake fury at my friend Chris Lang for predicting a lopsided loss this week for the Flying Dutchmen—not once but twice! The last time Hofstra went on the road to face a top 10 team, it lost 56-0 to James Madison. Probably won’t be that bad this week, but it won’t be good, either. Fourteen days until basketball. Giddyup.)

Looking back on it, the Freak Formal was really a disaster waiting to happen. People in costumes consuming copious amounts of cheap beer? It’s like a night at McHebe’s with an easy alibi. “No, that wasn’t me. I went there dressed as myself.”

Yet it provided some of my fondest memories and was one of the constants of my Hofstra tenure. Friends came and went and Jay Wright replaced VBK and Sbarro’s opened up in the Student Center and the Freshman Center turned into some kind of administrative building, but the Freak Formal was always there, the Saturday after Halloween (or maybe the Saturday before it), as steady and reliable as Daylight Savings Time (whoohoo, an extra hour of sleep!).

It was one of the few events to pack Hofstra USA (hey, this guy could only play once or twice a year), which always lagged behind the local bars in popularity. After all, who could turn down a free T-shirt and free plastic cup? 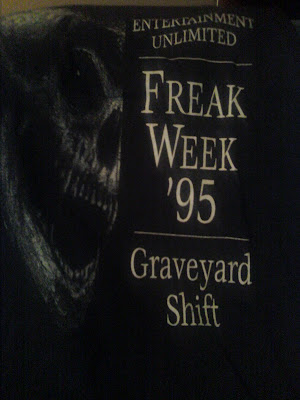 It pays to never throw anything out.

The Freak was also the most popular Hofstra event in northwest Connecticut. Every year, my best friend Randy came down for cheap beer and to sport an even cheaper costume. In 1993, he bought a black wig and went as Slash—this was 1993, when Guns-n-Roses had a new album out, there are words you’ll never read again, wait a minute, what’s coming out three weeks from Sunday?—except everyone thought he was Howard Stern, who had just released Private Parts.

Randy and my friend Scott came down the next year with my sister and her best friend and the five of us crammed into my single room in Vander Poel. Good times, except for when my sister skidded down the beer-soaked ramp. That was also the year Loyal Reader Rob (and this is a test to see if he really is a loyal reader) screwed up his knee in a pre-Freak football game and drowned his pain in the cheap beer.

My friend Dan joined Randy in 1995, when our arrival at the 1995 Freak was delayed as we watched Tom Glavine throw a one-hitter to win the World Series for the Atlanta Braves. That team’s going to be a dynasty, I can feel it! That was also the year Randy did away with the costume idea and got fake blood and put it on his face and went as a victim of a violent crime. Cause let’s face it…by that point, nobody was even pretending to go to the Freak Formal to play dress-up. Folks were going there for the cheap beer.

The Freak also served as a reminder that the fall semester was more than half over and that it was time to stop wearing shorts to class…or that it was time to start going to class. (That’s a test, too, to see if my family is among the loyal readers) It was also a sign of the approaching basketball season, back in the day when we wanted the football season to last as long as possible and just hoped for a reasonably painless basketball season. Yeah, things have changed a little in 15 years.

If you’re going to the Freak this weekend, have fun. (Or if you went last weekend…hope you had fun!) If I went, I’d be the guy dressed as Mary Beth Carey.

—I know there are a few of you out there who remember the best Halloween game ever played: Bears-Packers in a foggy, windy monsoon on Halloween night in 1994. I couldn’t find a clip of this game anywhere, but trust me, it was awesome.

—Here’s the best horror movie released in the Defiantly Dutch Era. Scream, released in late 1996, would have won easily had it only taken me three extra semesters to graduate instead of two.

—This my favorite horror movie ever. There’s not enough money in the world (especially now) to get me to say that word five times in front of a mirror. Let’s not talk about the sequels, though.

—Apparently there are people in the world with even more time on their hands than me. Here’s the real thing.

—Save me some Reese’s Peanut Butter Cups tonight. But don’t hand out mini-packs of Good n’ Plenty, which are neither good nor plentiful. Discuss amongst yourselves.