We’ll have a different kind of debate…when I moderate 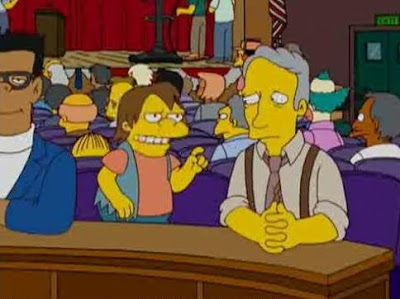 Ha ha! Your medium's dying! And no one's asking your questions tonight, either!

As you may have heard by now, tonight’s the night Hofstra makes history (oh man, a Styx reference in the first sentence…I can’t lie, I’m proud of myself) when it hosts the third and final presidential debate of the 2008 election. CBS News anchor Bob Schieffer will serve as the moderator (unless someone ponies up $15 million for Katie Couric) as John McCain and Barack Obama discuss the economy and domestic policy.

Which, you know, means neither candidate will speak about the issues that matter to you—the Defiantly Dutch-era alum of Hofstra University. This is your University. You were at the Hofstra Arena long before it was magically transformed from a place that had far too many seats to a place that had far too few. Shouldn’t someone vocalize your thoughts and concerns? Shouldn’t that someone be me?

It’s probably a good thing for American democracy that it’s not. But here’s what McCain, Obama and I would talk about if I was sitting in the moderator’s seat tonight.

1.) Both of you have promised to provide tax breaks and other assistance to small businesses. Along those lines, there are 3,000 journalists watching this debate right now from a few feet down the road in a building that has been empty of a professional sports team for well over a decade. So what, particularly, will you do to help the United States Basketball League resume operations this year with a Long Island franchise that employs Hofstra alums, plays its home games at the Physical Fitness Center and infuses the Hofstra economy with dozens of dollars every summer?

(I actually found an old Long Island Surf program from the 1994 season in the basement earlier tonight. Tickets were $5. Good times!)

2.) Small businesses are the lifeblood of businesses in the area surrounding campus. So many of these mom-and-pop operations are bars—and so many of them have been forced to close over the years. Fezziwig’s. Bogart’s. McHebe’s. Screwy Louie’s. Even Wayne Chrebet, who gave Hofstra more publicity than this here debate, had to rename and rebrand his bar that he opened on the site of the old Bogart’s. What will you do to encourage states to lower the drinking age to 18 so that students under the age of 21 can contribute to the economy by consuming cheap, watered-down beer without having to find a Hofstra ID with the blue bar?

(Or was it the yellow bar? I can’t remember.)

3.) Both of you supported the bailout plan that will result in government buying a stake in the American banking system. Can you next take over the NCAA Tournament Selection Committee, too? God knows you guys can’t be any worse at it than the bozos who have been mucking it up for years.

(This will sound like a good idea until Navy or Columbia gets an at-large bid despite a 12-16 record. Fun fact: The Flying Dutchmen basketball team is a combined 12-7 all-time against the alma maters of McCain and Obama!)

4.) Both of you have said it’s imperative to make a college education affordable to all Americans. Have you had a chance to mention this goal to anyone here, where the cost of tuition per semester this year is $13,800—a mere two-and-a-half times what it cost 14 years ago, when tuition was $5,530 per semester?

5.) Lastly, our current financial crisis was created in large part by too many people being approved for mortgages they could not afford. But who could blame people of my generation—who were approved for credit cards from the moment they walked on to a college campus despite their tiny incomes, minimal financial expertise and youthful impetuousness—for believing they were entitled to buy beyond their means? As president, what will you do to rid Hofstra—and campuses nationwide—of the weasels from the credit card companies who leech on to unsuspecting freshmen and transfer students during move-in weekend and send them down a path of debt that will take them a decade or more to erase?

Email Jerry at defiantlydutch@yahoo.com.
Posted by Jerry Beach at 7:40 AM

Holy Caturday! Congrats on the plug from Newsday in their Viewsday blog!
"The Buzz on Hofstra"

Or as KAC Attack said:
http://weblogs.newsday.com/news/opinion/viewsday/2008/10/hofstra_university_may_be_shut.html

Actually, I like your platform, Beach. How 'bout a run for President (at least of ESPN)?