What? It’s Wednesday! I’m right on time with my analysis of the men’s basketball schedule that was released Friday! 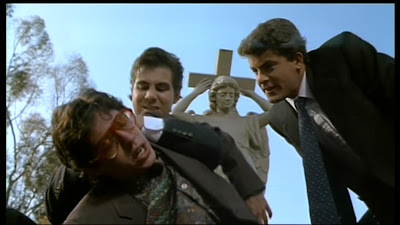 There is absolutely no way to make a PG-13 riff on this scene from Heathers (the greatest movie ever made), so let's just say the schedule-maker wasn't quite as cruel to the Flying Dutchmen basketball team as I originally thought.

Remember when I was complaining about how the out-of-conference schedule for the Flying Dutchmen basketball team was too weak? Well, five days after the entire schedule was finally released, I was very tempted to come here to complain about how tough and unfair it is.

Yes. I was about to officially become what I once loathed: The sports fan who thinks everyone’s out to screw his favorite team.

Alas, I am here to tell you that I was wrong. It’s a difficult schedule in terms of pacing and Defiantly Dutch-era fans won’t be happy with the placement of the true rivalry games, but a look back at last year’s schedule indicates it was more than fair in both those regards. Stupid no-good research shooting down my half-baked, blinded-by-fandom theories!

Devising a schedule is a complicated endeavor, particularly in a 12-team conference where each team has seven “rivals” it plays twice apiece and four other teams it plays once each. (Check it out: Looks like Hofstra finally gets to play George Mason twice a year in 2009-10 and 2010-11)

Still, loading the pre-New Year’s slate with winnable games against mid-major locals makes even more sense now, because it’s clear the conference schedule—especially during Intersession—was devised by a sadist. Or this guy, who really is out to screw Hofstra whenever possible.

Hofstra, which opens CAA play Dec. 6 at Towson, begins the New Year with a home-away-home trio of games against Drexel, Northeastern and Delaware, all in a five-day span from Jan. 3-7. The Flying Dutchmen didn’t play three games in five days at all last year.

The physical games against Drexel are exhausting enough when they occur 41 days apart, like last year, but this year the Flying Dutchmen take on the Dragons twice in an 11-day stretch. Ditto for Northeastern.

The schedule gets a little less rigid after students return to campus Jan. 28, which is the same day the Flying Dutchmen visit UNC-Wilmington. Can’t really complain about that: Hofstra opened the spring 2008 semester with a home game Jan. 28 against non-conference foe Longwood.

Hofstra is one of four schools (Georgia State, Old Dominion and William & Mary, the latter of which visits Hempstead Jan. 21) scheduled to play on the road on the first day of the spring semester. Only two schools open the semester with a home game (UNC-Wilmington and Northeastern).

(Along those lines: What’s up with half the conference starting classes the first two weeks of January? Northeastern, Georgia State, Drexel, UNC-Wilmington, Old Dominion and VCU all open on Jan. 12 or earlier. The best thing about New Year’s Eve back in 1993, 1994 and 1995 was knowing the first day of school was still four weeks away. Going back during or just after the Twelve Days Of Christmas would be no fun.)

Three of the four conference opponents Hofstra has played at least 20 times visit during a 14-day span in January. (The only one that shows up in February is Towson) I was tempted to pound the podium about how wrong it is that nobody gives any respect to the Defiantly Dutch-era rivalries…but the Flying Dutchmen played Delaware, Northeastern, Towson and Drexel after Feb. 1 last year. So there you go.

One thing I couldn’t complain about, even 500 words ago: The away schedule seems road trip-friendly. Manhattan is Thanksgiving weekend while Stony Brook is doable even on a Wednesday night in the middle of December. The wife has already pitched the idea of a trip to Drexel and the awesomely cramped Daskalakis Athletic Center during her vacation in mid-January, and what says Valentine’s Day better than a game at Delaware and dinner at Cluck U?

Immediate edit: Oh my. There is no longer a Cluck U in Newark. First the Stone Balloon goes to the great bar in the sky and now Cluck U. Why must the world be so cruel? OK it looks like our Valentine’s Day will be a game at Delaware and dinner at Friendly’s. Or Friday’s. Or there may be an Applebee’s there, I can’t remember.

And hell: With gas prices dropping daily and the economy robust, I’m figuring the gainfully employed Sully Ray will volunteer to drive to UMass and New Hampshire the Saturday before and after Christmas, respectively! Unless he wants to stick it to us like the schedule-maker, of course.

Email Jerry at defiantlydutch@yahoo.com.
Posted by Jerry Beach at 11:51 PM

Beach, I looked at that picture too quickly, and all I thought was what would Girthy think?

Re: Valentine's Day. Mrs. Defiantly Dutch is a saint.