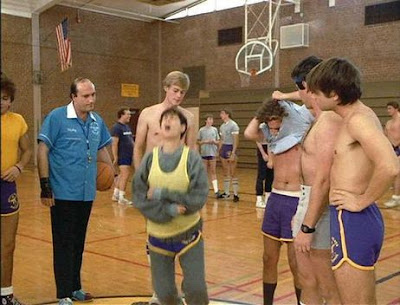 None of the new kids tried to back out of the scrimmage by feigning stomach cramps. Nor are any of them girls dressing up like dudes to prove they lost a journalism competition because of sexism. Seriously, has there ever been a better movie than Just One Of The Guys?

If you had the White team giving 3 ½…you win! The White team outlasted the Blue team, 43-39, in a scrimmage Wednesday night in front of a few dozen of us at the Arena. White outscored Blue 10-1 down the stretch to come back from a five-point deficit.

It’s late (or early, for everybody else), so here are some (fairly) quick thoughts on the scrimmage. I tried to keep score, but I know I missed a couple buckets, so my numbers are unofficial.

—The starting lineups: Greg Washington, Greg Johnson, Cornelius Vines, Dane Johnson and Zygis Sestokas started for White against Charles Jenkins, Tony Dennison, Darren Townes, Nathaniel Lester and Miklos Szabo. Mike Davis-Saab came off the bench for White while Arminas Urbutis and David Vallins came off the bench for Blue. Each half was 12 minutes.

—Jenkins, already the go-to guy and the face of the program as a sophomore, is the real deal. Jenkins, whose image adorns the season ticket brochure as well as the schedules that were available Wednesday (no pocket schedules yet, but he’ll surely be on those, too), did his usual filling of the box score—by my count, he had 17 points, including three 3-pointers, and one of the niftiest assists of the night when he fed a bounce pass to Townes, who was streaking across the baseline and hit the layup—while also emerging as the clear leader on the floor. He was the one assembling his teammates during stoppages in play and providing quick pointers or encouragement. He also looks as if he added some muscle, and he already looked a lot sturdier than Loren Stokes. Second-team All-CAA may be selling him short.

—Szabo, a native of Hungary who played the last two years at Broward Community College (JUCO alma mater of Adrian Uter), could be a beast. He was guarding Dane Johnson, who had at least an inch and 15 pounds on him, but Szabo barely let him breathe. He is, as football coaches like to say, a max-effort guy. Szabo also looks as if he can generate points inside or outside, a la Aurimas Kieza. But at 6-foot-9 and 250 pounds Szabo is much broader than Kieza, who was 6-foot-8 and 215 pounds.

—Greg Johnson looked OK running the point. He’s driven us all a little crazy with his inconsistency—he shot 31.2 percent from the field and had an assist-to-turnover ratio of 1.3 last year—but he kept the mistakes to a minimum and seemed content to set up everybody else Wednesday. He’s my pick for this year’s Roberto Gittens—the guy who turns it on midway through his senior season and puts up the type of performance he’s only occasionally hinted at the previous three-and-a-half years.

—Dane Johnson looks as if he’s kept off the 40 pounds he lost last year and warmed up offensively (six points) after a slow start. He seemed to run the floor more comfortably than last year, when he was battling various knee issues, but at 6-foot-10 and 250 pounds, he’s still the one big guy who will be deployed almost exclusively down low.

—Washington is still a work in progress, but he looks much-improved on offense. He missed a couple put backs early in the first half but hit a baby sky hook as well as a 15-footer and was 5-of-6 from the free throw line—pretty freakin' impressive considering he was 3-of-17 from the line during the regular season. You read that right. The fundamentally obsessed among us hope the rest of the team improved its free throw shooting as much as Washington: The Dutchmen shot just 67 percent from the line during the regular season last year, ninth-best in the CAA.

—Townes was, like usual, quietly steady. I thought he was the most underrated player on last year’s team, when he averaged eight points and 6.7 rebounds per game—fun fact: Uter averaged 6.2 points and 5.2 rebounds in his first season in 2004-05—and he provided more of the same Wednesday with eight points and solid defense. It seems as if he’s getting overlooked with all the new faces on the roster, but I wouldn’t be surprised if he matches or exceeds the 23 starts he registered last year.

—Vines, a transfer from Iowa Lakes Community College, has an Agudio-like unconsciousness from outside. He had 15 points, including three 3-pointers, but went cold in the middle of the scrimmage before he made a key steal late to give White a 41-38 lead. It’s very early, obviously, but he looks like a guy who could end up replacing a lot of Agudio’s production.

—Dennison, a 6-foot-3 transfer from Broward, did his best Stokes impersonation by mixing it up with the really big guys: He committed a charge on Davis-Saab, fouled Washington and blocked a shot by Dane Johnson. But he was also victimized by Vines for the pivotal steal in the final minute. He’ll be an intriguing one to watch.

—I was really curious to see how Lester and Sestokas, each of whom seemed to lack confidence at times last season, fared. Both ran hot and cold: Lester had seven points but committed a couple turnovers while Sestokas nailed his first three, missed three in a row but ended the night by draining his last two attempts.

—It seems as if the coaching staff is bringing Urbutis along slowly. He missed 11 games last year due to knee woes and had a quiet scrimmage. My guess is the staff would be happy if he can provide some depth in the first half before relying on him more in the second half.

—I’ve always liked Davis-Saab, who maximizes his 6-foot-7 frame down low, but he exceeded 12 minutes in a game just seven time last year and seems to be the odd man out again in the big man rotation this year. Vallins looked solid in his limited duty but I imagine we won’t see much of the walk-on after Old Westbury.

—Very cool touch: After the scrimmage, Tom Pecora sent the players up to thank and shake the hands of the fans. I’m going to assume that didn’t happen at North Carolina last weekend.

—BTW, Tina Turner’s video “The Best”—a Senior Day staple—was on as I wrote this. Yeah, I get goose bumpy and a little lump in the throat every time it plays at the Arena. Yes, I am a sentimental dork. Let’s move on.

—After the scrimmage, I drove by the Hofstra Soccer Stadium and decided to stop by to watch the final few minutes of what turned out to be a 2-2 tie against Towson. The last time I saw a soccer game at Hofstra, the programs were playing on the same field as the Intramural Department. Pretty impressive digs.

Alas, the following sentence will anger the soccer fans in the audience: It was cold and nobody scored while I was watching, which pretty much sums up every soccer game I’ve ever seen. Of course, I got home and learned I’d just missed seeing three goals scored in the span of 38 seconds, which I think is rarer than seeing a no-hitter. Of course, I missed one of those too during my final week at Hofstra. Damn you Doc.

Email Jerry at defiantlydutch@yahoo.com.
Posted by Jerry Beach at 8:57 AM

Thanks for the comprehensive report, Jerry! I would like to see G. Johnson finally put it together this season. So far, what I always think about when his name is mentioned is the time he drove for 2 against George Mason in the CAA tournament with the clock running out.
And we were down by 3. Sigh.