Did my parents' cats pull a Santa's Little Helper and destroy a mini-basketball autographed by Butch van Breda Kolff and three other guys? You'll have to read to find out!

Those who know me well know the only thing I’m better at than procrastinating is sleeping. I can sleep 10 or 12 hours at a clip. I’m such a deep sleeper that when a comet wipes out most of humanity and turns almost all the survivors into zombies, I’ll sleep through it and wake up completely unaffected, ready to run through the empty malls and drive unabated around the vacant streets.

(Man, a 45-word sentence devoted to Night Of The Comet, the ultimate rainy Saturday afternoon movie. Did not see that one coming, at all)

I am famous for sleeping through the alarm and whacking the snooze bar as often as possible. One morning during my first year at Hofstra, Loyal Reader and former roommate John was so disgusted with the alarm going off every nine minutes that he fired a sneaker at me. I slept through it.

So my wife could not have been surprised Sunday, when she tried stirring me at my parents’ house.

“C’mon, don’t you want to check your fantasy lineup one more time?”
“Mmmmm.”

Then she said the magic words.

“Your mom says the cats are playing with the mini-basketball.”

Ever see a cartoon where the character moves so fast that he leaves his outline behind? That was me. I went from barely lucid to some state of super-consciousness. In one fluid motion, I got up, put on my jeans, opened the door and stormed down the stairs.

I wasn’t looking for it, but after a few hours in my possession, I realized I couldn’t do without it. I mean, we’re talking about a basketball featuring 1,913 victories, three Final Four appearances and three Hall of Famers, not to mention the memories of a raucous dinner at the Crest Hollow Country Club.

That puppy deserves to be displayed, ever so carefully, behind glass, for the rest of time. Never mind that this irreplaceable memento was in the basement for God only knows how long, collecting dust and God only knows what else, or that to have this irreplaceable memento taken from me mere hours after I re-discovered it would have been ironic in the sense that it wouldn’t be ironic at all.

That was then. This was now. And the thought of my parents’ cats ripping the mini-basketball to shreds, a la Santa’s Little Helper and the quilt produced by six generations of Marge Simpson’s family, made my stomach hurt.

“Where’s the ball?” I said. Not the nicest greeting to the woman who bore and raised and showered me with unconditional love, I’ll admit.

I looked in the living room, where I’d left it on the floor the night before. Not there. If the cats killed the ball…I love cats. I really do. They are the best, most loyal and intelligent animal companions on the planet. But if my parents’ cats killed the ball, taking them from the house and putting them up for adoption (the cats, not my parents) would have been the kindest fate I could have administered. By far.

Then I saw it: Leaning up against my dad’s recliner. I ran over and picked it up, fearing it would disintegrate as I did so. No. It was still in one piece. Now for the second fear: It would be pecked with little scratch marks. No. No scratch marks.

Then it was time to peruse the ball to make sure its most important features remained intact: The signatures. And they, too, were fine and appear no more smudged than the last time I’d looked at the ball mere hours earlier.

“Aren’t you glad the cats are declawed?” mom said.

I picked the ball up, walked into the living room and placed it behind a whole bunch of frames on the highest and most cluttered table in the room, someplace even the damn cats couldn’t get to it. Then I saw one of them stretch out on the floor in the “look at me, rub my innocent little belly” pose. Damn cats.

So yes. The mini-basketball is still alive and placed, temporarily at least, on a shelf behind glass doors in our bookcase. Here are some admittedly crappy pictures taken with my cell phone. Believe it or not, my attempts to take pictures with a real camera were even worse. If I can find anyone (hint: I’m talking to you, darling wife!) to take better pics, I’ll post them. 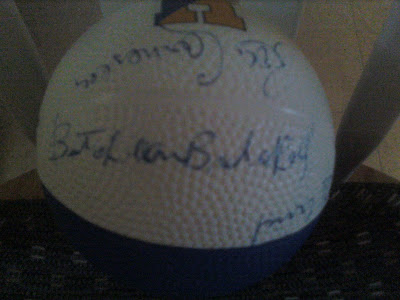 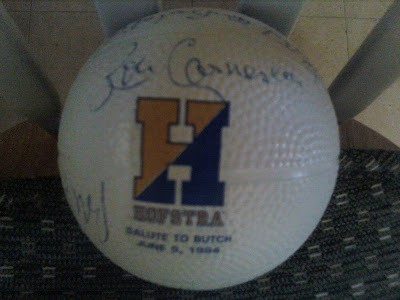 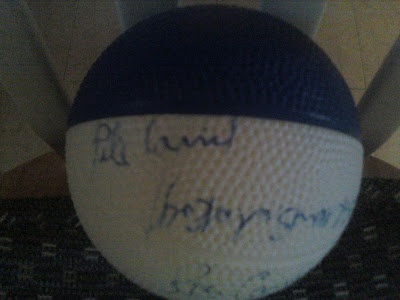 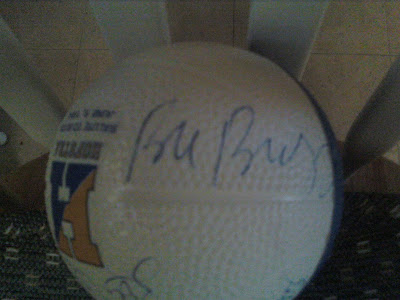 I realize gushing over an autographed mini-basketball isn’t exactly the smartest thing to do for someone who still harbors hopes of getting back into sportswriting for a living (once again, if you’re hiring, email me at defiantlydutch@yahoo.com!). And today, the thought of asking someone for an autograph—particularly someone I’d covered months earlier, even if he was a retiring icon surrounded by fellow icons of his sport—makes me shudder.

But back then, I didn’t know any better. And even knowing what I know today, I’ve got no regrets about going into fanboy mode around VBK at 20 years old. Nearly 15 years later, I still haven’t covered anyone as interesting as him.

He was different—a living legend yet one whose ratio of accessibility to accomplishment was completely out of whack, and in a good way. He was a guy who came within two points of winning an NBA title with the Lakers, yet he lived at Twin Oaks and, I believe, coached Hofstra’s tennis team for a while.

I couldn’t believe it when the sports editor of The Chronicle told me I could just go to the Physical Fitness Center and talk to VBK after a practice. The first time I ever interviewed VBK after a game, he invited me into his office and offered me a beer and half his sandwich.

VBK loved his beer, something he noted during his hilarious speech at the Crest Hollow. He ranted and raved about how the doctors told him he could no longer drink real beer after his heart attack scare earlier in the year, so he was stuck drinking O’Douls.

He eschewed glitz and glamour in favor of sweatpants, sweaters and an authentic love for basketball and teaching. Upon retiring from Hofstra, he said he hoped he taught his players important things about punctuality and professionalism.

He also had no interest in coddling large egos or compromising his beliefs. VBK told Wilt Chamberlain to stay seated after the Lakers mounted a stirring comeback in Game Seven of the 1969 NBA Finals, a decision that surely played a big part in his vagabond late-career path to the backwoods of the ABA, the WBL (Women’s Basketball League) and a Mississippi high school before he landed at Lafayette, Hofstra and, for a brief time in 1996, the United States Basketball League.

It’s a cool memento of a bygone era, that basketball signed by VBK and three other guys. And it’s one I’ve saved from the cats. For good.

Many moons ago, David Cone was the special guest at one of those little league baseball trophy dinner things and my mother took the once in a lifetime photo of him and my brother. Only she completely cut off his head from the picture, so all you see is my brother with some dude's arm around his shoulder and of course no one believes it was actually David Cone.

Wait, you have a basketball (albeit a "mini" one) signed by VBK, Lou Carnesecca, Pete Carril and Bill Bradley and you kept it in your parents' basement under God knows what? Oh, Beach.

Any chance of bringing back the painted chest "V-B-K" chants at Flying Dutchmen games?

He was one of a kind, and Hofstra was lucky to have him -- twice!

Re: your parents' cats. What a bunch of pussies.

KacAttack: Um, if Beach got less sleep and approved these comments sooner, I could have responded to you in the middle of the night last night and said that Yeah, sure, it's David Cone and not Frank Rizzo with his arm around your brother.