No knock on Agudio if Dutch are better without him 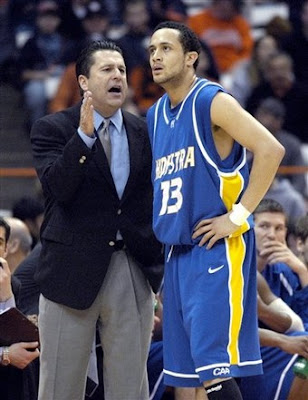 Two hundred and forty-two days after Antonie Agudio played his final game at Hofstra Arena, we get a glimpse tonight of how the Flying Dutchmen will look without the most prolific scorer in school history when the Blue/White Scrimmage takes place at 8. Michael Litos had a really interesting post last week in which he wrote that the Flying Dutchmen will need multiple players to replace Agudio’s scoring yet may not find him irreplaceable:

Don’t get me wrong, Agudio was a great scorer. What I mean is that while Agudio may have filled up the hoop, he wasn’t the best player. I think he may have had about three double-doubles his entire career. I’d bet Carlos Rivera had more dub-dubs. And Loren Stokes? Fuggetaboutit. Those guys made everyone better.

And Mike is correct in contending that Agudio wasn’t as impressive an all-around player as Stokes or Rivera. But that’s fine. He wasn’t a bruised-and-battered slasher like Stokes and he wasn’t a do-everything point guard like Rivera. He was a cold-blooded outside shooter, and nobody ever did it any better at Hofstra than Agudio, who finished his career, appropriately enough, with 357 three-pointers.

If he missed his first 10 shots, you didn’t want to see him anchored to the bench. You wanted his teammates to keep feeding him the ball because you felt as if he’d find his stroke in the next 10 shots.

Stokes and Rivera certainly made everyone better, including Agudio. Nobody noticed who or what he wasn’t when he was surrounded by those two stars. And while the Flying Dutchmen missed the versatile play of Stokes and Rivera last year, I don’t think Hofstra even reaches double digits in victories without Agudio providing a foundation for a team in transition.

And this isn't directed at Mike, but I also think the perception of Agudio is skewed a bit by fate: Had he not broken his hand in a season-opening exhibition in 2003-04, he doesn’t get redshirted and he graduates with Stokes and Rivera as one-third of a phenomenal senior class. (And in that case, Steve Nisenson probably still holds the school scoring record) But because he had an extra year, the final memory of Agudio is as the key member of the Flying Dutchmen’s disappointing 2007-08 season, not as part of the group that thrust Hofstra on to the national stage.

All that said, I won’t be surprised at all if the Flying Dutchmen are much better in the first year of the post-Agudio era. I think this could be the most diverse team Pecora’s ever coached, one that won’t be nearly as reliant on guard play and can create points inside as well as outside. I don’t think Pecora, who has long loved running the offense around fleet guard play, has gotten enough credit for adapting his philosophies and recognizing how valuable front court depth can be at the mid-major level. Adrian Uter and Aurimas Kieza were tremendous in 2005-06, but there wasn’t much behind them.

The Flying Dutchmen have six players listed at 6-foot-7 or taller. It’s not the first time Hofstra’s had several big bodies, but the first time it feels like every single one of the big guys can be contributors. So it’ll be particularly interesting to see how returnees Greg Washington, Dane Johnson, Darren Townes, Mike Davis-Saab and Arminas Urbutis and transfer Miklos Szabo look tonight.

If you’re going, see you there. I’ll be the guy yelling about Chris Johnke.

Email Jerry at defiantlydutch@yahoo.com.
Posted by Jerry Beach at 7:29 AM