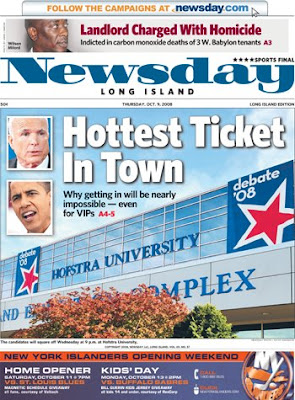 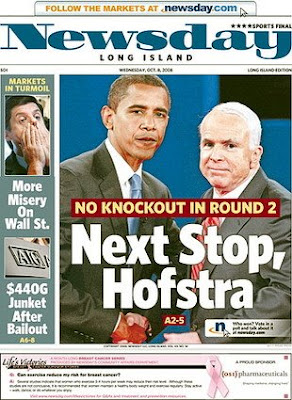 (Ugh, ads on the front page of newspapers...so tacky)
No sports hook here, unless you count the displacement of various Hofstra sports teams from the north side of campus cause of this little ol’ presidential debate (to which you still cannot get a ticket). But this has got to be the first time ever—or at least in the Defiantly Dutch Era—that Hofstra has been featured on the front page of Newsday on consecutive days.

The Flying Dutchmen basketball team might have gotten the school on the back page in consecutive days during the 2000 and 2001 NCAA Tournaments, and I remember three back pages in a span of 10 days in the spring of 2006, when Hofstra was The Team That Beat George Mason Twice In 11 Days But Got Screwed Anyway.

But the front page is generally unchartered waters for Hofstra. When I was there, the Powers That Be were obsessed with Newsday and the coverage Long Island’s only newspaper provided the school.

The Powers That Be are still consumed with what is written and said about the school, but I imagine Newsday ranks a lot lower on the list of priorities today than it did 15 years ago, at least when it comes to generating debate-related publicity. I imagine Hofstra gets a much bigger boost when the words “Hofstra University” are uttered by Tom Brokaw or Bob Schieffer than from any newspaper story. And Hofstra hopes you’ll skip the traditional media and go straight to the bells-and-whistles page it has devoted to the debate at its official site (though it should be pointed out the Newsday front pages are displayed on the fourth panel of the page).

Plus, let’s face it: If you consider consecutive front pages a notable burst of publicity, you’re old. Like me. Nobody reads newspapers, which are hastening their own demise by gutting the news hole and staff and charging people the same (or more) to read less, and the old standards about timing a major news announcement for maximum (or minimum) placement in the newspaper are extinct.

Barack Obama originally planned to announce his running mate via email and text message Saturday, Aug. 23, at least until CNN stole his thunder by breaking the news the night before. For those of you fortunate enough not to have majored in communications and journalism, Fridays used to be reserved for releasing news that presidential administrations wanted to bury.

That’s today’s riff on the media. While we’re on the media, though, you should check out my blogging mentor the Icepick, who has some really insightful takes on the declining state of the American press here and here. And come back tomorrow for some Bucknell-Hofstra talk as well as some links and Loyal Reader email.

Email Jerry at defiantlydutch@yahoo.com.
Posted by Jerry Beach at 8:17 PM

Labels: Front and back pages of Newsday, Icepick, Media, Old rules of breaking news, Presidential Debate, The Powers That Be

Let's hope, for Hofstra's sake, that Wednesday's debate is more like the first two presidential—vice-presidential debates, and nothing like the more recent town hall snooze-fest. The importance of policy positions and governing philosophy aside, that was like watching grass grow at Hofstra Stadium (yes, I know it's turf … it's still turf, right?). Otherwise, were it not already "sold out," the size of the crowd might sadly resemble an intersession Flying Dutch hoops game circa 1992.

Only slightly tangentially related (OK, completely unrelated, except that it also involves newspaper front pages): Someone from my high school once made the front page of the local paper for investing in a nearby city that sorely needed the investment. My hometown buddies joked that it was the first time someone from our high school made the front page without the words "arrested" or "indicted" in the headline. But I digress.

Thanks for the plug, Beach.