We hate you Seth Meyers!!! 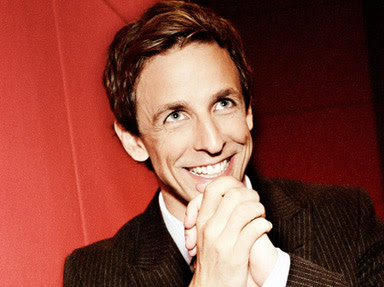 (Seth Meyers, his face frozen in a terrified smile, begs and prays for mercy after the fury of the full Defiantly Dutch readership is unleashed upon him)

I was ticked off I’d missed it…for about 12 seconds, until I realized I’d be able to find a replay no later than this morning on nbc.com. Seriously, remember the days when you had one chance to watch something and that was it? Remember the vaguely empty feeling you had when you missed some cultural touchstone moment and realized that no matter how many times you heard it recounted from your friends, you wouldn’t know EXACTLY what they were talking about until the program re-aired or the clip in question ended up on some snarky VH-1 show years later?

What was life like before we could just call up clips on the computer? I’m pretty sure it was terrible, and nobody was happy, and St. John’s regularly beat Hofstra in men’s basketball.

Anyway, here’s what Big Fat Stupidhead had to say:

“I like how the candidates always thank the host school. Even though we all know they have nothing better going on. What else were they going to do? What were they going to do at Hofstra last night? Was the a capella group going to sing? I mean, it’s college football season. We’re talking about Hofstra, for goodness sakes!”

First off, Seth CLEARLY doesn’t know of that bar in one of the suburbs (Mineola?) that used to bus kids to and from Hofstra on Wednesday nights in the fall of ‘93. Damn if I can remember the name of it, since by that point I was already spending Wednesdays in The Chronicle office. But this bar used to paper the dorms with advertisements, at least until it was shut down (color me shocked, a bar that advertised GET DRUNK ON WEDNESDAYS!!! got busted for serving underage kids) and I remember future Chroniclers stumbling into the office to drunkenly annoy the rest of us sober dorks.

And we all can’t go to Northwestern, whose football team pulled a choke even the Rays could not match by being on the wrong end of the biggest comeback in college football history when it blew a 35-point lead in a 41-38 loss to Michigan State in 2006. And no, Hofstra fans have never stormed the field at Shuart Stadium, but that also means we never stormed the field after we set the record for MOST CONSECUTIVE LOSSES EVER!!! Nor do we storm the field after wins over, say, Albany. I mean, Stony Brook. (All that Northwestern minutiae can be found here)

(This is when I will conveniently ignore that Northwestern is Division I-A in football and that the school has an almost unmatched reputation as an elite university, with or without a presidential debate) 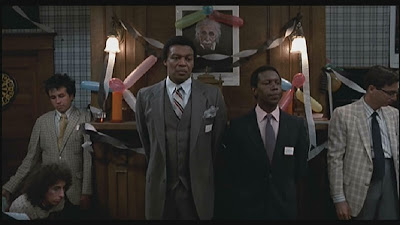 There's no Dudley Dawson to save you, Northwestern basketball.

If Dave Cohen is half the leader of men I think he is, he’s going to use Meyers’ disdain of the Hofstra football program to rile the Flying Dutchmen into a fury that will carry them to a thrashing of Maine Saturday afternoon. (Two Revenge of the Nerds pics in as many graphs…what a day) 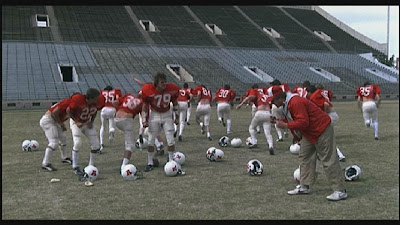 (Oh, and since this is probably the only segue I’ll be able to make to, you know, actual football today, check out this story from the Richmond Times-Dispatch about how expensive football travel has become. It’ll be interesting to see what the CAA does to minimize travel when it expands to 14 football teams with Old Dominion and Georgia State—especially if this latest dip in gas proves to be the fluke and not last summer’s price spike. Oh and I was going to pick Hofstra to lose by two touchdowns, but now I think they’ll win by three at the gun, just to spite Seth Meyers. I now return to my regularly scheduled rant)

The Real Seth Meyers was a top 100 recruit in 1993 who transferred from UNLV—where he was recruited by assistant coaches Jay Wright and Tom Pecora, the latter of whom begins his eighth season at the helm today when practice begins, how’s that for a casual mention of real news. There were big hopes for Meyers, but after ranking second on the Flying Dutchmen in scoring in 1995-96, he transferred to Division III Wilkes University in his native Pennsylvania following the death of his mother.

That would be the same Wilkes University that’s made six NCAA Tournament appearances—all since 1995—and reached the Final Four with the REAL Seth Meyers in 1998. Maybe Northwestern should go D-III. Maybe then it could make an NCAA Tournament. Take that, Fake Seth Meyers!

Email the Real Jerry at defiantlydutch@yahoo.com.
Posted by Jerry Beach at 6:23 PM

A.) Big ups to John O'Connor (thanks for repping the RT-D!) for the travel costs story. O'Connor's great at stories like that.

Yes, and also for saving humanity from the Terminators and the Rise of the Machines. Oh, wait, this isn't the Sarah Connor Chronicles blog? Sorry. I got mixed up by The Chronicle reference. My bad. Move along. Move along. Nothing to see here.