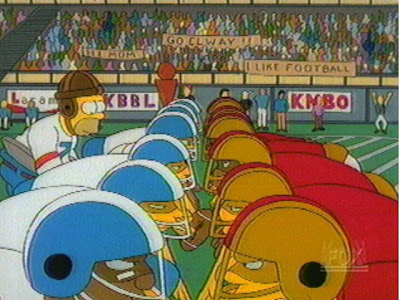 Even Homer Simpson—shown here dodging Sideshow Bob by assuming the identity of John Elway impersonator Cory Christopher—could not score a touchdown at the gun to bring Hofstra within 56-7.

That’s right. The Flying Dutchwomen volleyball team outlasted James Madison, three games to two Saturday in Virginia. (Note: I know the NCAA ditched the “games” reference in favor of “sets” earlier this year. But like with the NCAA’s new term for I-AA, I refuse to conform. Why change it to sets? Calling what everyone else calls sets “games” differentiated volleyball from tennis. So there.)

It was exciting stuff, with none of the first four games decided by more than five points and the fifth game decided by two points. The win was Hofstra’s second five-game victory in as many nights and improved the road-weary Flying Dutchwomen—who are is in the midst of a 47-day stretch in which it does not host a match on campus—to 2-1 in the CAA, a game behind their next opponent, William & Mary.

And that’s it. Nothing else happened this weekend between the Dutch and the Dukes. The football team enjoyed its weekend off by watching Division I football at Margiotta Hall. And the field hockey team took a couple days off after its overtime win over VCU Friday.

Ahh, as if refusing to discuss something really did mean it never happened. The seventh-ranked James Madison field hockey team beat the Flying Dutchwomen, 7-3, Sunday in Virginia. It’s only the third time since 2003 Hofstra has allowed as many as seven goals in a game.

And you no doubt know by now, the Flying Dutchmen absorbed an extraordinary beating Saturday in a 56-0 loss to top-ranked James Madison. My wife and I had an idea of how bad things were going when I logged on to WRHU.com in the second quarter and heard one of the announcers saying anything was possible in the face of a 21-0 deficit.

I doubt he was referring to the possibility of Hofstra suffering the most lopsided defeat in the program’s 68-year history (exceeding the 49-point margin of defeat against Lehigh in 1973 and American International in 1979) or only the third shutout since 1978. On the bright side, though, the 56 points allowed only tied a school record! (American International also scored 56 points) Somewhere, you just know that the loyal fans of Central Connecticut State and Charleston Southern are having a good laugh.

(Honest to goodness true story: As I finished writing this, John Discepolo—the former Flying Dutchmen punter and current WCBS-2 sports anchor—opened his report on the Giants’ rout of the Seahawks by saying “I can tell you guys, as a player, there’s nothing worse than traveling a long distance, getting your tails kicked in and then having to fly back seven hours. It is the quietest and the longest ride of your life. And that’s exactly what the Seahawks had to endure yesterday.” John was on the 1992 team that went to Montana and got smoked 50-6 in the season finale. See? Who says you can’t be productive staying up all night?)

We have no idea how brutal the bus ride home was. But to get an idea of how ugly the game was to watch, check out the running thread at the Hofstra board at CAAZone.com. Dave Cohen can only hope the rest of the fan base isn’t as livid today.

A quick look at the final stat packet indicates the game may not have been as close as the final score indicated. The highlight for Hofstra occurred on the opening kickoff, when Chris Edmond recovered a fumble at the James Madison 41. The next three plays resulted in a loss of eight yards and Shane Casciano’s punt was blocked and returned for a touchdown on fourth down.

Hofstra, which was shutout for only the third time since 1978, was limited to 195 yards of total offense on 65 plays and had only four plays of 10 yards or more. The Flying Dutchmen moved beyond the James Madison 30-yard-line just once, but Roger Williams missed a 27-yard field goal late in the first half.

So…yeah. Good thing I got that Hofstra/receiving votes anecdote out of the way Friday. As good as James Madison is, the loss confirms the fears of those who wondered how the rebuilding Flying Dutchmen would fare against the meat of a brutal schedule. Cohen and his staff get a chance to retool against non-conference foe Bucknell, which has won three games by a combined 13 points, and Maine, which is 0-2 in the CAA, before playing three straight teams currently ranked among the top 15 in the I-AA coaches’ poll.

On the brighter side, the weekend wasn’t a completely lost one here at DDHQ. The trip home to the original DDHQ was a successful one as I found some cool Defiantly Dutch-era swag in the basement…and, I hope, the holy grail amongst a box of videotapes buried in my bedroom closet: Old SportsChannel football broadcasts!

More tomorrow on the coolest item I found in the basement. And less on James Madison’s dominance.

Email Jerry at defiantlydutch@yahoo.com.
Posted by Jerry Beach at 5:33 AM

Yeah, right. And you had a copy of "Everybody Loves Raymond" in that brown bag, too. ("That's just a really good show.")