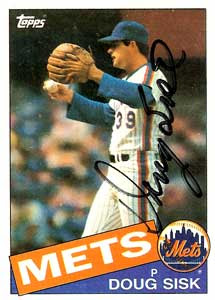 Doug Sisk: Awful in his prime, but still better today than Luis Ayala and Aaron Heilman.

Sorry for the longer than anticipated sabbatical. The off-board work took longer than I anticipated to complete. (And my entire audience wonders where it’s heard THAT before)

Ahh who am I kidding? The only person who noticed I was gone was Sully Ray, who says he reads me every day but still sent me an impatient email Wednesday wondering where I was. I guess, like so many readers who are starved for time and an attention span these days, he scans instead of reads and misses end-of-story tags that explain my impending absence. Sniff.

Anyway, we’ll be back to a regular Monday-Friday posting next week. But a few quick things before Hofstra tries to take down top-ranked James Madison Saturday in Virginia:

—After the Flying Dutchmen lost to Albany, I figured there was no chance I could use Loyal Reader Rob’s hilarious observation made a few days before the game, when he noted Hofstra received five votes in the first I-AA poll of the season. Wrote Rob: “It made me think that if we were running The Chronicle, it would have a front-page story that [read] ‘Dutch Ranked 48th in New Poll.’”

It’s true. Back then, Hofstra was so far below the radar in most sports—softball and men’s lacrosse being the exceptions—that any national recognition was a big deal. And as sports fans who were ticked off that nobody seemed to be paying any attention to the Division I program right on campus, Rob, myself and the rest of the editorial board didn’t need much of an excuse to want to splash sports on the front page.

Still, I like to think we resisted the urge most of the time and kept the front page for the truly important news of the week. Like the endless friggin’ secretaries strike in 1995 or the re-opening of Dunkin Donuts across from campus. (I don’t care how convenient that one was and is, some of the best memories of college involved driving to the Dunkin’ Donuts in East Meadow in the middle of the night for a sugar- and caffeine-fueled pick-me-up)

Where was I? Oh yeah. The I-AA poll. Amazingly, Hofstra crawled back into the “others receiving votes” category this week, when it garnered TWO votes in the coaches’ poll. That tied the Flying Dutchmen for 39th in the nation with Colgate and San Diego…but a vote ahead of three other schools, including Harvard. Hofstra: No longer half as expensive as Harvard, but twice as good in football!

Now I’m as big and supportive a Hofstra fan as anyone you’ll ever find, and I haven’t seen any other I-AA games this season. But I’m not sure how two voters could place the Flying Dutchmen in the national top 25 after two wins over a pair of teams with a combined record of 2-8—especially given the razor-thin escape against Rhode Island, which was picked to finish last in the CAA North, and Stony Brook’s slumping offense, which is on pace to score negative points by Oct. 18.

Oh well I’m not complaining. I just hope Hofstra does enough against James Madison to remain among those receiving votes. And if the Flying Dutchmen win…I better see a front page story about it in The Chronicle.

—Regardless of how the football team fares Saturday, at least it’ll play. Which is more than Colgate can say.

—The Sports Network, which runs the writer’s poll, foresees a 30-17 win for James Madison.

—According to crack Hofstra SID Jim Sheehan, the Flying Dutchmen haven’t played the nation’s top-ranked team since 2002, when they fell to Montana 21-0 at Shuart Stadium. Overall, Hofstra is 3-10 against Top 10 teams since 2001.

—Keep your fingers crossed—all four of you!—that this weekend is a bountiful one at Defiantly Dutch. We’re heading up to the original DDHQ—that would be my parents’ house—for a visit and I’m going to head into the basement and see what kind of old-school artifacts I can dig up. I know what I want to find, I just hope the items didn’t vanish with time.

Email Jerry at defiantlydutch@yahoo.com.
Posted by Jerry Beach at 10:59 PM

And even better, Doug Sisk never blew a 600-run lead the way Heilman did in Carlos Voltron's last start.

I read you every day, dammit!