See? I told you so. The trends were in favor of Hofstra limiting Stony Brook to a field goal. 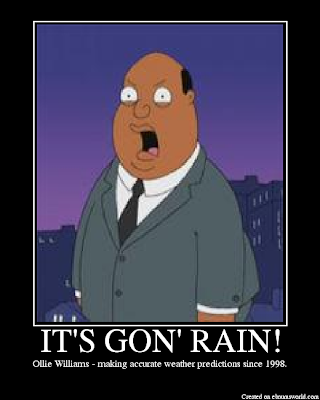 Nobody's umbrella ended up two miles away inside out Friday. Thanks, local weathermen!

Before we get chatting about what will almost surely be the most lopsided victory of the year for the Flying Dutchmen football team, I’d like to give a big shout out to the weathermen who scared the wife and I into sitting home Friday instead of actually seeing the 43-3 win in person.

As a member of the media, I’ve always hated it when the public uses a negative experience—or a negative perception—to broadly and unfavorably paint the rest of us with the same stroke. But, you know, I’m already over blasting all weathermen.

I know, I know: You can’t predict the weather and its various quirks and hiccups. Well, if it’s unpredictable, then stop gushing over your super duper new awesome Doppler 92,000,000 and how it’s going to make my life so much more awesome. You never hear media members prattle on about how the newest digital recorder is going to bring you your news in a more accurate and timely fashion, do you?

Plus, I don’t mind criticizing weathermen because they’re not like cops. You’re not going to be sitting there during a downpour or a blizzard going “Damnit! Where is a weatherman when I need one?” and wishing you’d never said anything negative about their entire species.

Where was I? Oh yeah. My wife and I sitting home and watching MSG-Plus (how can MSG have a Plus when they’re so bereft of programming they aired MSG, NY or MSG Vault for 13 hours on the flagship between 8 am Sunday and 4 am Monday?) because we feared we’d end up watching the game in a Charleston Southern-type end-of-the-world monsoon. Instead, LaValle Stadium was blanketed in a gentle mist.

Apparently, we weren’t the only ones scared off by lousy weather reports. The listed attendance of 2,105 seemed quite generous judging by the acres of empty space.

What we missed was a final score that did indeed evoke nostalgia, though not the type I was imagining last week. One trend I forgot to mention Friday was Hofstra’s 3-1 mark and razor-thin average margin of victory (6.5 points) in its last four games against non-scholarship programs.

But instead of providing a reminder of the days when Hofstra was the non-scholarship team scaring the bejeezus out of the Big Dogs, the Flying Dutchmen harkened back to the old-fashioned beatings they would administer to undermanned opponents—like in 2005, when they beat Albany and Stony Brook by a combined score of 91-7. Or, if you’re like me, it was reminiscent of 1995 and that 56-6 Homecoming thrashing of Charleston Southern that felt as if it easily could have been 156-0.

But the Flying Dutchmen did what a scholarship program is supposed to do against a Stony Brook-type program: Take advantage of mistakes, put the proverbial foot on the proverbial throat (as opposed to the Mets, who put their actual hands on their actual throats—two years running!) and don’t give the non-scholarship opponent a chance to believe it can pull off a miracle.

Stony Brook’s one chance to create some momentum on its first possession evaporated when a wide-open Dwayne Eley dropped a sure touchdown pass on second down. The Seawolves turned the ball over on downs and didn’t move back into Hofstra territory until they were down 31-0.

Leslie Jackman made the play of the night—and, according to ESPN, the 10th-best play in America; he’s still no Chris Parsons—when he stripped Edwin Gowins of the ball near the sideline and raced 60 yards for the touchdown. Two other interceptions led to touchdowns.

There was no need to fill up the stat sheet up 17-0 a minute into the second quarter, 24-0 midway thru the period and 31-3 at halftime. By that point, the only objective was to get out healthy heading into this weekend’s game against a far more formidable foe: James Madison, which is ranked no. 1 in the I-AA coaches’ poll and no. 2 in the writers’ poll.

The only remaining suspense Friday was provided by the Dutchmen’s quest to keep the Seawolves out of the end zone and an impressive third quarter punt by Roger Williams, who ran 20 yards to chase down an errant snap, turned around and managed to boot the ball inside the Seawolves’ five-yard-line.

Good thing he didn’t pay any attention to the weathermen. Otherwise he probably would have fallen to the ground and conceded the lost yardage, because who could possibly punt in that monsoon?

(Note: Posts may be sporadic as I finish another writing project over the next couple days)

Email Jerry at defiantlydutch@yahoo.com.
Posted by Jerry Beach at 2:24 AM

Perhaps the Mets could have used this guy's help for another game, though it looks like the Dutch didn't, at least for this one game.

(Jagzhemash, thanks to Patrick Bateman for the link)

Jerry, I remember that 56-6 win over Charleston Southern. I could barely see through the press-box windows because they were so fogged up.

Since you just mentioned Roger Williams, Hofstra punter and founder of Rhode Island, I thought I would bring this to your Whaler-loving attention about the Wiffle-ball haters in your neighboring home state:

Is Greenwich, Connecticut Too Big To Fail?