Albany is who we used to be! And we let them off the hook! 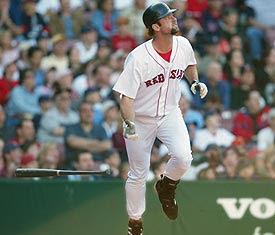 (Hi. I'm former Red Sox first baseman/outfielder David McCarty. That kid from Albany may think he's pretty good, but has he ever hit a game-winning homer at Fenway, mopped up in a big league game and won a World Series ring, all in the same season? I didn't think so)

Did that game Saturday night look a little familiar?

Did you sense Albany, already bursting with the belief they could knock off a Big Bad School With A Full Allotment Of Scholarships, gaining confidence that it could accomplish the seemingly with every possession?

And did you watch the Great Danes spill on to the field after David McCarty—who apparently missed the memo that guys sporting uniform no. 3 are no longer allowed to run wild at Shuart Stadium—barged in for the game-winning touchdown in overtime and recall the abject joy of watching David slay Goliath?

I was going to say Albany’s 22-16 win—the Great Danes’ first win over Hofstra since the days of Breakfast Club, Pretty In Pink, even St. Elmo’s Fire—represented the completion of Hofstra’s 180-degree turn from the pursuer to the pursued, but cracking open the media guide revealed the Flying Dutchmen lost to Big South schools Elon and Liberty, neither of whom had 63 scholarships, in 2002.

And let’s face it: Hofstra’s not exactly a Goliath this season. Nor was this exactly Michigan-Appalachian State—Hofstra was a three-point favorite against a team gave UMass all it could handle last week.

Still, it’s odd to see things from the other side. But that’s progress, right? I mean, you can’t be the lovable underdog forever. Even these guys eventually got past it.

Hofstra ran more than three times as many plays as Albany in the fourth quarter (29-9), held the ball for 36:41 and converted eight of 16 third- or fourth-down conversions. Yet despite running 18 more plays, the Flying Dutchmen outgained the Great Danes by just 95 yards. Hofstra squandered seven points on busted field goals and extra points and, after going for it on fourth down and scoring a touchdown in the first quarter, employed a game plan conservative enough to make Herm Edwards look like Air Coryell.

Hard to blame Dave Cohen for playing for the field goal in the final minute of regulation, but after two blocked kicks, why did he think kicking a field goal in overtime was a good idea? I’m sure Cohen is saying all the right, albeit boring-as-a-tour-of-a-box-factory things about it’s only one game, there’s nine to go, gotta forget about this one and look ahead to this week, etc etc. But human nature suggests it’s a lot easier to leave behind a game in which you leave seven points on the field and win by one rather than losing the same contest in overtime.

In addition, a win Saturday was essential because it would have felt like a nice building block, particularly given the encouraging performances of new starting QB Cory Christopher and freshman RB Brock Jackolski.

Christopher racked up more than 300 yards of total offense, seemed to be the only player the coaching staff trusted for much of the second half—he carried the ball on four straight plays and five of seven during a drive spanning the third and fourth quarters—and looked like a leader, especially on the methodical 19-play drive that looked as if it would result in a game-winning field goal. If you’ve got a quarterback who doesn’t panic and can make something out of nothing a few times a day, you’re ahead of the game.

And Jackolski, whom the staff planned to redshirt until recently, and showed flashes of that no. 1 back ability with three kickoff returns for 78 yards and a three-yard touchdown run.
Even with Christopher and Jackolski playing well, it was clear Saturday Hofstra has a lot of work to do as the CAA season approaches. But the task doesn’t look quite as imposing when the record is 1-1 instead of 0-2.

Now? Conservative probably won’t work against Rhode Island, which scored at will in a loss to New Hampshire Saturday. And with a month-long road trip after that, it’s threatening to get late early. And can you imagine being 0-3 going into Stony Brook a week from Friday? That’ll be a game the Dutchmen really can’t afford to lose.

Bob Ford has been coaching Albany (excuse me UAlbany) for like, forever, so sad as it is for the Dutch to fall, it was nice to see for Bob Ford. Naturally, the Times Union of suburban Albany painted it as David beating Goliath:

(Oh, Beach, you think you're bad for writing about last week's game on Wednesday? Well, I got you beat by a day, and all I did was post a link! How's that for procrastination?)