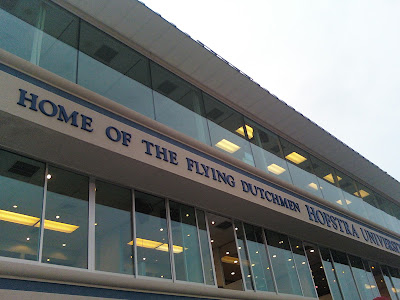 (It's catching! Either that or it's costly to re-arrange the lettering on the face of the press box, one or the other)

Penning this on a Wednesday night brings back memories—none of them any good for The Chronicle alums in the audience. Back in the day, nobody was better at covering something Friday or Saturday and waiting to write it until Wednesday night—when the stories were supposed to be long done and layout was supposed to occupy all our time—than me. True story: I chipped a tooth eating a hard-as-a-rock Dunkin Donuts cruller one layout night and Loyal Reader Rob thought it occurred when the editor-in-chief punched me out.

What can I say? I work better in a state of abject panic. And hey, I am better I was 14 years ago, seeing as how I actually already wrote about the football game Monday.

Anyway, when I saw the words “HOME OF THE FLYING DUTCHMEN” upon getting out of the car behind Shuart Stadium Saturday night, I figured it was a sign of good things to come for Hofstra. Not so much.

But walking into the Stadium as sunset approached reminded me of the days when nothing, not even the chance to consume watered-down beer during Happy Hour at Fezziwig’s, was better than a Friday night game on campus. And with that, I pause to down a shot.

Asides: I cannot believe they have a web page. So friggin’ awesome. And look at those late ‘80s/early ‘90s fashions! God, I love the Internet. If Rick and/or Ted are out there reading this, drop me a line.

So once again, I ask myself: How did seven years go by between games? Not to sound like a shill for the university, but football’s barely contained chaos sounds and looks a lot crisper in the metallic bleachers behind the home sideline. And the pre-kickoff anticipation among the players is a lot more tangible there than somewhere in the nosebleeds at Giants Stadium.

A bleacher seat also reminds you how wrong it is that there’s more yellow in the free T-shirts the cheerleaders chucked into the crowd (I didn’t catch one, even without Sully Ray the Bully elbowing me in areas that should never be elbowed) than in the actual uniform, which “features” a yellow belt. Wrong, so wrong.

It didn’t take us long to figure out the give-and-take between the PA guy and the crowd. “That’s another Hofstra…………………………first down.” Alas, no matter how hard we craned our ears, we weren’t quite able to make out the profane chants from the rockingest student section in the CAA.

Even as Albany hung around and the pessimist in me began to fret, my wife guaranteed a victory. And as Hofstra and for a while it looked like it’d be just about a perfect night: Great weather, schedule magnets, Thunderstix knockoffs intended to provide hours of amusement to my nephew—and hours of headaches for my lovely sister!—and a last-second win in our reintroduction to Shuart Stadium.

Instead, I’ll have to be content with my hunch being proved correct…as well as having called the third quarter safety that turned out to be the difference between victory and defeat. “We’re a couple plays away from a safety,” I said as Hofstra lined up at the two-yard-line.

I could sit here and tell you I’d rather have the victory. But that just might be a lie.

Some of you Loyal Readers may have noticed I added a stat counter to the bottom of the website over the weekend. So if you’ve been coming here since way back in the beginning, please acknowledge those visits by hitting refresh a bunch of times so I can have an accurate gauge of the popularity of Defiantly Dutch.

Then hit refresh a bunch more. And a bunch more after that. Hey, I’m not going to reach 99,999,999 site hits—and lure some venture capitalists into giving me a few million bucks without even presenting them a business model—all by myself, you know.

Rick and Ted, as well as any other Loyal Readers, should email Jerry at defiantlydutch@yahoo.com.
Posted by Jerry Beach at 11:50 PM

Was that the same chipped tooth that took a backseat tour of the southeastern US and wound up at 50 cent wiener night in NO?