“What is this Pride nonsense? Bring back the Flying Dutchmen!” 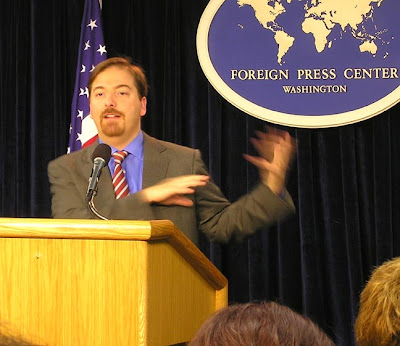 Chuck Todd takes his case for the Flying Dutchmen straight to the Washington, D.C. press corps.
I can’t lie: I wasn’t watching MSNBC at the moment Chuck Todd uttered those 10 words and became the official political analyst of Defiantly Dutch. The pre-debate shows on all the news networks reminded me too much of the Super Bowl pre-game show: Lots of words and bluster ultimately signifying nothing except a buffer between commercials.

Those Super Bowl pre-game shows are useful only when news breaks of a Barrett Robbins or Stanley Wilson going on a bender or of an NFL Man of the Year such as Eugene Robinson getting busted for solicitation (and not the type where you don’t want someone knocking on your door selling stuff, either). And I was pretty confident that neither John McCain nor Barack Obama would flake out or even pull a Jumbo Elliott by getting into a brawl at The Bar Formerly Known As Bogart’s in the hours before the debate.

So I was doing what any good American should be doing during in the late afternoon hours—watching a painfully awful yet terribly engrossing episode of Beverly Hills 90210; this was the one where the gang graduated and subjected the rest of their dorky classmates to Senior Week festivities centered entirely around nine snobs—when Semi-Loyal Reader Josh alerted me to Todd’s disdain for the demise of the Flying Dutchmen nickname. (Josh, like Brandon Walsh, is a Minnesota Twins fan who won’t read me regularly until I start referring to guys like Les Straker or begin pitching the Hall of Fame candidacy of Bert Blyleven. But I will not pander for readers. Go Twins!)

Apparently, Todd made multiple references to the unfortunate Flying Dutchmen-for-Pride swap. I’m still trying to find one or more of those clips on the Interwebs; if any of my Loyal Readers can hook me up with a link, I’d be forever indebted.

And here’s to you. Chuck Todd. Anytime you want to watch the Flying Dutchmen at the Arena and grab a burger at Hofstra USA (which is not the Student Center, as a WNBC talking head called it late last night), it's on me.

Todd had the line of the night, but Defiantly Dutch-era Hofstra grads had their share of wisecracks that nobody except Flying Dutchmen fans would get. Here are my five favorite:

5.) “Who’s in my seat, damnit?”—my wife as the debate opened. Couldn’t even begin to figure out where the seats were in an unrecognizable Arena.

4.) “Is the possession arrow pointing to Obama now?”—my wife after McCain got the last word in on one of the questions. I hate the possession arrow. Coin flips aren’t that much better. A jump ball should have determined who got to make the first closing statement.

3.) “Now they’re both going to Dutch Treats for a sandwich.”—Loyal Reader Eric after the post-debate handshake. The economy’s in the crapper; I doubt either man has enough money left on his meal card for a Dutch Treats sandwich.

2.) “Are Kate and Willie in the crowd posing with candidates?”—my wife after the debate. Really. We needed the mascots making their way through the crowd, forcing awkward photo opportunities.

1.) “Jeff is still laughing at Blankman’s suggestion that Obama & McCain stop the debate if someone buys them shots.”—seen on fellow ex-Chronicle editor Jeff’s Facebook page. Awesome. Nobody ever forgets Rick and Ted. Still, I personally would have preferred if McCain and Obama picked up guitars and began singing “American Pie.”

As for the debate itself: I wish somebody would have asked Joe the Plumber if he preferred Flying Dutchmen or Pride. Oh well. Maybe in 2012.

Email Jerry the Blogger at defiantlydutch@yahoo.com.
Posted by Jerry Beach at 7:34 AM

I also noticed, watching the post-debate spin shows, that several students claimed this debate was the most important thing that ever happened at Hofstra. In deference to that inescapable fact, Tweety wore a sweater.

(And Blyleven has to go into the HOF, dammit! Get on board! Train's leaving!)