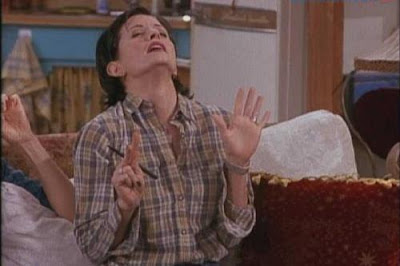 If only the rest of the world was as enthusiastic about Hofstra's chances this year as Monica Geller.

In the middle of some other deadline work here (no, really, I swear), so just a quick post to mention that Hofstra was picked seventh in the CAA preseason poll, released today at CAA Media Day in D.C. The poll is comprised of CAA coaches, sports information directors and media.

Seven is right in line with where the other preview magazines have pegged the Flying Dutchmen thus far. Hofstra is picked to finish sixth by Athlon, seventh by Lindy's, eighth by Blue Ribbon Yearbook and ninth by Sporting News. Many more predictions to come, of course.

I'll return later tonight or early tomorrow with more thoughts on the preseason polls.
Posted by Jerry Beach at 4:51 PM

JB asked me to file a quickie report on the media day, since I was in attendance.

And, really, there's not a whole lot to report. If you've never been to a media day, it's basically a bunch of coaches saying pretty much the same thing ('We're really looking forward to the season...' etc.) over and over.

I did have a chance to sit down with Pecora for a few minutes for a story unrelated to his season. And I must say, for a paper that he has absolutely no use for, he's been awfully kind to me. 'Let me know if you ever need anything,' he said. So I will not speak badly of the man.

Anyway, we had a nice chat about the challenges of playing in the New York market and a brief chat on the state of NYC college basketball. As usual, it was rather informative.

The whole day was, really. I even learned the nuances of the matchup zone from Delaware women's coach Tina Martin. (My expertise is football, hence the need for an explanation.)

One thing that wasn't informative: Hofstra's media guide, which was put to shame by every other men's guide and all but one women's guide.

Um, and where does Defiantly Dutch pick them? And for that matter, where does Seth Meyers (either of them) pick the Flying Dutch?