No, we're not talking about THAT Triumph 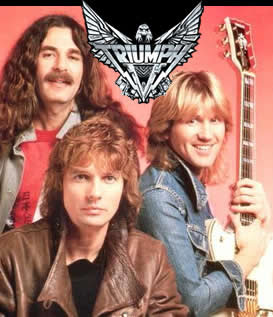 I wonder if these guys ever played the PFC.

This, that and the other thing while I check my watch and impatiently wait to see where the Flying Dutchmen basketball team will land in the CAA pre-season poll, which will be released during the conference’s Media Day Wednesday:

I’m not sure what would have sounded more unbelievable during the fall of 1993: That the campus I was inhabiting would someday host a presidential debate, that neophyte talk show host Conan O’Brien would someday replace Jay Leno as the host of The Tonight Show (if you want to remember just how overmatched O’Brien appeared, check out his debut monologue from Sept. 13, 1993…he reminds me of me flopping miserably in speech class) or that a puppet dog who appears on O’Brien show and talks about his poop would one day invade the Physical Fitness Center.

For the purposes of this post, I’ll say “C.” Triumph the Insult Comic Dog defiled what used to be the rockingest house in the NAC Wednesday, when he and the Fake Mr. Met patrolled the spin room in the PFC (Triumph begins around the 11:45 mark). Fun fact: This bit aired a mere three hours after Fake Seth Meyers dogged Hofstra. SNL and Triumph mocking Hofstra on the same night: Now THAT’S publicity you can’t buy!!!

I should preface this by saying Triumph makes me laugh. His appearances on Conan are can’t-miss affairs (and I almost missed this one, too, thank you very much historic Red Sox comeback!). Triumph’s routine with fans lining up weeks ahead of time for the return of Star Wars in 1999 is the funniest thing I have ever seen. I mean, ever. If you don’t agree, you’re wrong. And the skit Thursday cracked me up several times, especially the image of Mr. Met floating behind Fox News Channel anchor Greta Van Susteren.

Plus, let’s face it: The more we’re able to laugh at this whole process, the better.

All that said: Isn’t a presidential debate a little too serious for the Triumphs of the world? I get annoyed by buffoons who somehow obtain press passes to the Super Bowl and World Series at the expense of people who, you know, actually work. (Dear Tom Arnold, who managed to make a tool of himself while the Florida Marlins celebrated their 2003 World Championship: You do not deserve a press pass. Ever.)

In the end, of course, you can’t get too wrapped up about the Tom Arnolds and Julie Browns of the world, because it’s just sports. And, sure, Triumph didn’t spring up behind Bob Schieffer and ask a question of John McCain and Barack Obama.

But still…this is the most pivotal election in American history. You’d think the powers that be—and according to this link from 2004, it’s the Commission on Presidential Debates that credentials reporters to the debates—would think twice about intentionally diminishing the solemnity of the event and inviting on-site mocking for the host schools by credentialing a puppet dog who ended his routine by pretending to hump a baseball mascot.

While I laughed at the line, I can’t imagine Stuart Rabinowitz was thrilled with Triumph’s crack at the school: “The best America has to offer has descended upon Hofstra University. Yes, Hofstra University: The place DeVry applicants use as a safety school!” Or maybe it’ll all be worth it when 52 percent of incoming freshmen in the fall of 2009 say they heard about Hofstra from Triumph the Insult Comic Dog.

Unlucky timing of the year award goes to the Flying Dutchwomen field hockey team, which had to play Columbia Wednesday night while the rest of the campus reveled in its 15 minutes of international fame. Making matters worse was the 3-0 loss the Dutchwomen suffered—the fourth defeat in their current five-game losing streak.

We got another whiff of the big time Wednesday when Newsday.com linked our Wednesday post about the questions I’d ask if I was moderating the debate. Thanks to Newsday.com as well as loyal reader KAC, who found the link. I don’t want you to think I sit around all day, using Google News’ “blog search” to find mentions of Defiantly Dutch. I do that all night, thank you very much.

Defiantly Dutch has made its first purchase. I can’t believe this page was available at pro-football-reference.com. I call this $15 well-spent.

And I’ll further whet your (and my) appetite for the CAA predictions by mentioning a couple preseason polls/predictions. Collegehoops.net is asking fans to pick the CAA winner: George Mason, Northwestern, ODU, VCU or “other.” VCU is the leader so far. Also check out the Q&A there with Tom Pecora.

And CAA blogger extraordinaire Michael Litos has penned the CAA preview for The Blue Ribbon Yearbook and picked Hofstra eighth. (No link to the content, just to a website where you can buy the Yearbook…not giving the goods away for free online, what a concept) Litos explains on the CAA Zone message boards that he sees the Flying Dutchmen as a sleeper in the conference and that he’d pick them as high as sixth if he was writing the article now. Well, not right now. He’s probably sleeping right now, like most normal people.

Email Jerry at defiantlydutch@yahoo.com.
Posted by Jerry Beach at 7:26 AM

Um, I think this is the link you want for Triumph.

I don't care what Seth Meyers (um, the one you wrote about, not the other one) thinks, but I do tend to agree with Triumph the Insult Comic Dog on a school that unceremoniously ditched its awesome Flying Dutchman mascot and history to sell a few extra T-shirts. What's next? Shooing the cats away from Bits & Bytes? But I digress.

Oh, and one more thing. If Lupica can get credentials to the World Series, Super Bowl, et al., then Triumph should rightly be able to score a press pass to the debates. Though I heard Triumph is big fan of buying the paper on the days when it runs the Lip's cityside columns — for me to poop on!