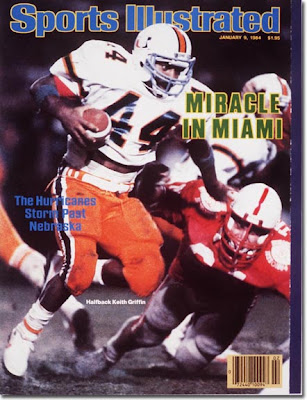 If you were 10 years old in 1984, you, too, probably had to wait several days to read about Miami upsetting Nebraska. Kids these days, with their later bedtimes, BCS Championship Games and Internet...they have no idea how good they have it.

It’s a moot point this year, since Jan. 2 falls on a Friday and everyone in a public school is off until Monday, but today reminds me that the best part about going to college—other than “18 and over” Happy Hours, of course—was not having to go back to class on Jan. 2. The looming return to school put a damper on New Years Eve and ruined New Years Day, which was one long torturous reminder that I could no longer stay up as late as I wanted.

I was never a big college football fan, probably because I never got to see the national championship decided because I had to be in bed by 9 during elementary school. Who knows how different I’d be today if I was able to stay up 25 years ago and watch the classic 1984 Orange Bowl in which Miami shocked previously unbeaten Nebraska to move from fourth to first in the final polls?

Now, of course, there are more bowl games played after New Years Day than on it, including classics that feature powerhouses such as Buffalo, UConn, Ball State and Tulsa, and the national championship takes place a full week after New Years Day, by which point every CAA team but two will have played four conference games. (How’s that for a smooth segue?)

As a college basketball fan, New Years Day is now welcome, because it signals the real start of conference play. We’ve spent weeks alternately wondering and fretting over how good the Flying Dutchmen are. By the end of this stretch of three games in five days, we’ll have a good idea which instinct was correct.

So will the fans of every other CAA school. Michael Litos pointed out eariler this week that what is fun for us is hell for coaches, but Hofstra seems to have little to complain about, at least from a travel perspective: The Dutchmen play Drexel Saturday, travel to Northeastern Monday and host Delaware Wednesday. No plane rides, only one night in a hotel and no traffic if they travel to and fro Boston at the right times.

Of course, schedule-wise, it’s a beast. Recent games against Drexel and Delaware—Hofstra’s biggest traditional rivals—have been appropriately suspenseful. The Flying Dutchmen won their two games over Drexel by a combined 17 points last year, but five of the seven games between the teams the previous three seasons either went into overtime or were determined by a basket. The last three games against Delaware have been settled by five points or less while the Dutchmen are 1-2 in Northeastern’s band box since the Huskies joined the CAA in 2005.

Drexel is the perfect team against which to begin this measuring stick stretch. The Dragons were a consensus pick to finish at or near the bottom of the CAA, but Bruiser Flint is too good a coach and his teams too tough to bring up the rear two years in a row. Drexel beat Rider and St. Joseph’s over the last six days to improve to 4-6 (I may or may not have a post later about how it seems like everyone is getting hot entering CAA play), but the only teams it lost to by more than six points were Georgetown and Memphis. And those guys are pretty good.

The Dragons aren’t a mirror image of the Dutchmen, but similarities shared by the teams—as page two of Jeremy Kniffin's notes package indicates, both teams have been cold from the field and the free throw line but make up for some of those offensive struggles by outrebounding the opposition—should ensure another physical, intense game that will be a lot more compelling and fun to watch than the box score will indicate.

I wouldn’t be surprised if Greg Johnson—who set career highs with 15 points in 40 minutes against Drexel in Philadelphia last January—plays a pivotal role. And if the Dutchmen are going to win, they’ll need two guys to help Greg Washington out down low. So the picks to click Saturday are Miklos Szabo and Darren Townes. Hey, I’m nothing if not loyal.

Oh, and the over/under on technical fouls earned by passionate and vocal head coaches who laugh at the confines of the coach’s box is 1.5.

I may or may not be there, as I might be out of state and taking this one in on TV. If I’m not there, say hello to my wife. She’ll be the one snagging T-shirts from the grip of Sully Ray.