Hofstra 57, Northeastern 52 (Or: In which I become the Drew Bledsoe to Sully Ray’s Tom Brady) 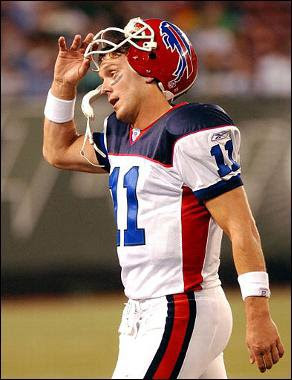 I know how you feel, Drew.

I’ve figured out what was missing for the Flying Dutchmen. Or, actually, what wasn’t missing.

Two weeks ago today, I went to Boston to watch the Flying Dutchmen play unbeaten Northeastern. The Dutchmen trailed from start to finish and lost by 23 in one of the bleakest performances of the Tom Pecora era. So Saturday, I was in Boston to not watch or listen to the Flying Dutchmen play unbeaten Northeastern, and with Sully Ray pinch-blogging (and, he says, catching a T-shirt while holding two hot dogs in his other hand…absent any photographic evidence, I’ll have to declare he’s full of it and I maintain my 2-0 lead), the Dutchmen win, 57-52.

(You know what I did watch though? VCU-ODU. Apparently, you can watch two Virginia-based schools on television in Boston, but not a Boston-based school vs. a New York-based school. OK then. Hopefully I can see New Hampshire vs. Maine once I get home)

Furthermore, I realized, in typing this, that the Dutchmen are actually 3-0 in games when I do not watch or listen to them. They won the final two games of the Charleston Classic. So the guy who has written tens of thousands of words wondering what might be wrong with the Dutchmen is actually the reason WHY something might be wrong with the Dutchmen. Coming soon: Sully Ray waxing nostalgic about the days when he used to sniff chemicals in The Chronicle darkroom and re-telling stories of how I snored the entire time during our road trip for spring break ’95.

Anyway, before the Dutchmen ride Sully Ray all the way to the CAA championship and I follow in the footsteps of another Bostonian and get traded to upstate New York—where I figure I’ll blog about Tom Parrotta and Chris Gadley—I will say I got at least one thing right: The whole gotta-prove-the-disgusted-parent-wrong thing. I never figured Pecora and Van Macon were giving up on the Dutchmen after the uncompetitive loss to Drexel Wednesday, but they had to figure that speaking as strongly as they did would make the Dutchmen particularly mad and prideful.

Hey, with the knowledge my you-know-what would be grounded as soon as the report cards arrived, I followed the failing of Algebra II during the second marking period of my junior year of high school by getting an A-minus on the mid-year exam. Oh, that’s right. I was an equal opportunity flunker.

Where was I? Oh yes.

The Dutchmen also provided another reminder Saturday why they are the perfect symbol of an unpredictable conference. Litos wrote last week Hofstra would come up with as many head-scratching wins as losses, but I doubt even he thought he’d be proven right IN CONSECUTIVE GAMES. The Dutchmen, in a span of three games, have thrown a scare into the preseason favorite, trailed wire-to-wire for the second time this season against a team picked to finish 11th in the conference and knocked off the unbeaten—and previously unchallenged—co-leader. This stuff is for the sadistic, I tell you.

Anyone who says he pegged how the playing time would shake out Saturday is either a liar or the only person on the planet who predicted a Cardinals-Steelers Super Bowl. Darren Townes, on a milk carton for weeks, started and played 28 minutes, one more minute than he’d played in the last four games combined. Arminas Urbutis played 31 minutes and pulled down nine rebounds after playing 32 minutes and collecting eight rebounds in the first five games of the month.

Nathaniel Lester made his first start of the season, shot just 1-of-9 from the field yet played a season-high 36 minutes and led the Dutchmen and set career highs with five assists (half as many assists as he had in the first 17 games) and three steals (one more than he had in his first 17 games). Greg Johnson had two assists, one steal and no turnovers, but played just 18 minutes (his minutes this month, by the way: 34-37-38-40-22-18).

Tony Dennison, who entered the game shooting 33 percent from the field and 58 percent from the line, hit both his field goal attempts and was 4-of-6 from the line in scoring nine points. Cornelius Vines, who was one of only two players to start the first 17 games, came off the bench and played a season-low nine minutes—none, according to the in-game thread at the CAA Zone, after he chucked up an ill-advised three.

And Charles Jenkins, whose field goal percentage lately (27 percent—35-for-129—in his previous nine games) has been somewhere south of the outgoing president’s approval ratings, finally came back and played his most complete game in weeks. Jenkins bounced back from a 3-of-9 performance over the first 20 minutes to make five of his seven shots in the second half and five of his six free throws in a clutch performance straight out of November.

Jenkins scored seven straight points for the Dutchmen and nine overall in a 12-1 run that turned a 32-28 deficit into a 40-33 lead and hit two free throws to give Hofstra the lead for good at 52-51 in the final minute. In addition, he was also credited with shutting down Northeastern’s biggest weapon, Matt Janning.

The win wasn’t a thing of beauty: The Dutchmen didn’t hit a field goal in the final 6:41 but held on by hitting 11 of their last 13 free throws. Nor did the Dutchmen escape unscathed: Miklos Szabo hurt his arm in the second half and was wearing a sling on the bench.

In addition, Sully Ray reports, via text, that it was a “…great game by none, good game by all.” That’s why I like Sully Ray: He’s a calm, collected sort whose approach to life is a cliché. Had I been there Saturday, I probably would have come up with multiple reasons why the Dutchmen are now headed for the Final Four. Except, of course, Northeastern would have won by 74.

And sure, the Dutchmen might have taken advantage of a wiped Northeastern team. Oh well. Fair is fair. Playing the Huskies in Boston 53 hours after facing Drexel on Long Island wasn’t a whole lot of fun, either.

So where do the Dutchmen—now 3-4 and a mere game out of a first-round bye, it’s never too early to look too far ahead!—go from here? The hell if I know. The last three games have proven how impossible it is to project three weeks ahead, but I will say the schedule lines up nicely for Hofstra to make a charge over the next 22 days—something I’ll blog about in the next day or two.

If I were a betting man, though, I’d bet all Pecora wants for his birthday is me not paying any attention Wednesday night. And I’d also wager the Dutchmen would be in great shape if I sold the blog to Sully Ray. My asking price begins at one million dollars.

Email Jerry at defiantlydutch@yahoo.com. And join the Defiantly Dutch group at Facebook today!
Posted by Jerry Beach at 4:50 AM