Northeastern 73, Hofstra 50 (Or: Can Stuart Smalley fit in one more appointment before he starts his new job?) 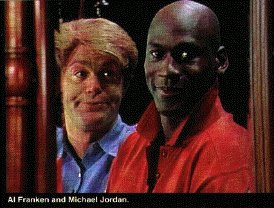 The Dutchmen need to repeat after Stuart: They're good enough, they're smart enough and gosh darnit people still like them to win the CAA.

So let’s get the positives of Monday night out of the way, shall we? I once again vanquished the city of Boston and its draconian meter maids by snagging a perfect parking spot right by my destination, which in this case was Matthews Arena.

Of course, it wasn’t an easy victory, because nothing worth having—particularly parking spots in Boston, which sheds metered spots at a quicker rate than American media companies shed journalists—is easy.

And it was not without temptation, as in, I’m tempted to just pay out my you-know-what just to be done with this ordeal. But as I always do, I realized it’s not about the money, it’s about the principle of the thing and not falling victim to the devious plan concocted by the city and the proprietors of parking garages and lots. After all: The fewer spots there are, the more likely you are to pay out your you-know-what just to be done with the ordeal.

It was $19 to park in the Matthews Arena parking lot Monday (it was almost completely empty, take that!) or $8 for three hours in the garage across the street. Of course, that’s an introductory-level course in getting screwed compared to what happens a mile or two away at Fenway Park, where, as of 2007, the neighborhood parking lots charged anywhere from $35 to your firstborn for a spot. And that’s why I’d drive around and around the neighborhood, only occasionally punching the steering wheel and spewing four-letter words, in constant search of a metered spot.

I wedged myself in between a car and a snow bank, patted myself on the back, reached my seat in three minutes (well, I mean, it did take me two-and-a-half hours of driving just to get within three minutes of my seat) and hoped it was a sign of things to come.

It wasn’t. I should have taken a picture of the nifty parallel parking job (then again, that might just be weird), because it was all downhill from that point on for anyone connected to or rooting for Hofstra.

The only good thing to say about Northeastern 73, Hofstra 50 (that's from The Boston Globe, the Boston Herald recap is here) is that it has to be rock bottom…right? The Flying Dutchmen committed four turnovers before even taking a shot. They turned the ball over on seven of their first nine possessions and finished with 25 turnovers. Tom Pecora benched four-fifths of the starting lineup—everyone except Greg Johnson, how’s that for something that was inconceivable even a week ago—a mere 2:35 into the game.

Northeastern had its way down low—they out-rebounded the Dutchmen 39-32 and received 38 points and 11 rebounds from their starting front court—despite Hofstra’s size advantage. The most telling image of the Huskies’ dominance: Manny Adako drove the lane past three Dutchmen for a dunk in the first half.

No Dutchmen scored in double figures, the first time that’s happened in eight seasons under Pecora. For the second straight game, the Dutchmen were limited to 18 points in the first half. They closed within single digits just twice after falling behind 11-0 and trailed wire-to-wire for the second straight game. (At some point today, now that my eyes aren’t glazed over after spending eight hours in a car, I’ll try to figure out the last time that happened)

More inconceivability (wow, that’s a word, awesome): Johnson—whose nickname during the OOC should have been Milk Carton—led the Dutchmen in minutes for the second straight game. Speaking of milk cartons, the Dutchmen lineup after the final media timeout consisted entirely of guys who have been buried in the rotation at some point this season: Johnson, Nathaniel Lester, Zygis Sestakos, Darren Townes and Greg Washington.

The game ended in appropriate fashion as the Dutchmen tried to create one more shot yet dribbled out the clock instead. Tony Dennison found an open David Vallins, who passed up an open 3-point look (and the pleas of “SHOOT IT!” from the Hofstra faithful that wanted to see the walk-on net his first career points) with two seconds left and dished the ball to Sestakos, who didn’t get a shot off before the buzzer.

This is a confused team lacking any sort of cohesion or confidence right now. Even with more turnovers (five) than assists (four) Monday, Johnson is providing some semblance of stability at the point. But there’s still no flow on that side of the ball.

The Dutchmen struggle to produce anything when Charles Jenkins and Cornelius Vines—who set and tied a season-low in shots attempted Monday with nine and eight, respectively—are shut down. Possessions lately seem to end one pass too early or one pass too late. Dane Johnson had the best line of the night for the Dutchmen (eight rebounds and six points on 3-of-3 shooting), but even he seemed tentative down low.

Jenkins is a mess and it’s painful to watch a player who was bursting with such positive momentum just a few weeks ago. Jenkins made just one of those nine field goal attempts and scored a career-low three points as his streak of double-digit efforts ended at 28. He sat out the final 5:10 in what amounted to a mental health day move by Pecora.

In Jenkins’ defense, it’s as if the refs are misreading “22” as “KICK ME.” For the second straight game, he had two baskets waved off due to charging calls. I swear, I haven’t seen charging called as much as it’s been called the last two games. Probably blog bias, I admit.

During timeouts Monday, Pecora would gather with his assistants for a few seconds before heading to the huddle. And by the end of the game, he would open his address to the players by…just staring at them for a few seconds, as if to say “What is there to say?”

This is the biggest challenge Pecora’s ever encountered as Hofstra head coach. He’s overseen rebuilding eras (his first three seasons) as well as what appeared to be a transition season last year. But he’s never had to rebuild a team’s shattered psyche in midseason. I know it’s official now that Al Franken has a new day job, but maybe he can send Stuart Smalley out to Hempstead to give the Dutchmen a giant dose of self-affirmation.

Sounds crazy, sure. But Monday night proved that it’s easier to find a parking spot in Boston than a cure to what’s ailing the Dutchmen.

Email Jerry at defiantlydutch@yahoo.com.
Posted by Jerry Beach at 3:16 PM