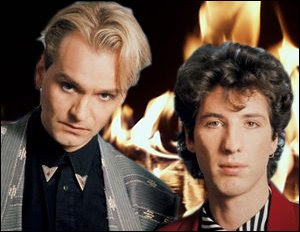 If you’re like me (once again, I’m sorry…are you thinking Monday is a good day to really start the diet, too?), then you were surprised to call up the CAA standings and see Hofstra still residing at the top with a 9-3 record. It seems like every time I look at ESPN’s scroll, another CAA team is extending its winning streak, which further fuels the concern over the Flying Dutchmen, who have struggled just to tread water over the last four weeks.

The league-wide reality doesn’t quite match the perception—or does it? Since the look-but-don’t-touch CAA opener Dec. 6, CAA teams are 28-23, which represents a pretty solid improvement over the overall record prior to and including the openers (44-46).

But the bulk of the conference played far better than the mean over the last four weeks. The eight teams who are better than .500 over that span—Hofstra, Old Dominion, George Mason, VCU, Northeastern, James Madison, Delaware and William & Mary—are a combined 25-7.

When perennial contender Old Dominion got off to a slow start (1-3, including consecutive losses to Bucknell and Marshall by a combined five points), it gave hope to those picked in the middle or the back of the pack. But the Monarchs (5-0 following the conference opener) are by far the hottest team in the conference with seven straight wins, including the last five by at least 10 points. Three of those victories have been by at least 25 points.

Delaware, which was a near-consensus pick to return to the top half of the conference, is 4-1 since a four-game losing streak. James Madison, expected to struggle under first-year coach Matt Brady, went 4-1 after the conference opener with wins over perennial NCAA Tournament team Belmont on the road and a home rout of Big East foe Seton Hall. The Dukes’ lone loss was a more-than-respectable 13-point defeat at Texas-El Paso.

Northeastern, a popular pick to enjoy a first-round bye in March, has played just three games since Dec. 6, but the Huskies beat Indiana on the road and suffered their loss at defending national runner-up Memphis. William & Mary has played just two games since the conference opener, but hey, 2-0 is 2-0.

The perception is that VCU and George Mason have yet to meet expectations. VCU, with three straight wins by five points or less, isn’t looking like the unstoppable force it was predicted to be two months ago, while George Mason doesn’t yet appear to have a take-charge guy. Yet the two teams are a combined 8-2 since the CAA openers. To paraphrase something Mike Piazza used to say a lot: You know you’ve got a pretty impressive track record when 8-2 is being criticized.

The other four teams—Georgia State, Drexel, Towson and UNC-Wilmington—dragged the overall record down by going a combined 3-16. And even Drexel’s placement among the bottom four is a bit misleading: The Dragons have won their last two games and lost only one game by more than six points in a stretch in which they played only one home contest.

It’s anybody’s ballgame, it’s everybody’s ballgame. We wouldn’t have it any other way. Let’s go. (If you’re an old-school MTV fan, you will absolutely love the first minute or so of that clip)

***
Today’s gritfest (not a word, but it should be) against Drexel won’t be the only one Hofstra plays in the next five days. Northeastern, the Flying Dutchmen’s opponent Monday, has given up 60 points or less in five of its 11 games. Two straight sludgey (again, not a word, but it should be) games to start the schedule, followed by another battle for ECC bragging rights with Delaware. Add it all up and I feel like I did prior to Charleston seven weeks ago (!!): A 2-1 mark would be fine and dandy. Three-and-oh and, once again, I might change the name of the blog to Deliriously Dutch.

Two interesting stories to read before we get immersed in conference play. Good piece by Litos at Basketball State, complete with quotes from Tom Pecora, about why more mid-majors are scheduling OOC games against non-Division I foes. Can you identify the three former Flying Dutchmen pictured behind Pecora?

And check out the four-part CAA preview by Wilmington Star-News beat writer Brian Mull at his blog. The entry featuring his look at Hofstra can be found here.

Lastly, I’ve been meaning to do this for weeks, ever since Pecora said this when I asked him about predictions during our pre-season Q&A: “I think everyone picked VCU and then they threw the rest of the teams in the hat and just started pulling them out.”

So I thought to myself, let’s do that and see how close it comes to the real thing. But six weeks came and went and here we are. So I better do it now, before it’s irrelevant instead of just irreverent. Ever mix up those words? I have. Embarrassing. 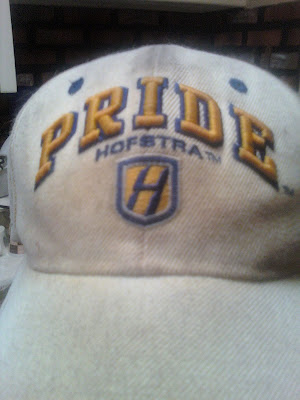 You should see the inside brim. Proudly perspired.
Here's how the hat picked 'em:

That happens, and I’m taking the hat to Vegas and playing the NFL and MLB futures with it. And then destroying it for dooming the Flying Dutchmen.

Email Jerry at defiantlydutch@yahoo.com.
Posted by Jerry Beach at 5:18 AM

Labels: Irrelevant vs. Irreverent, Mike Piazza, MTV, Picks in a hat, Reality vs. Perception, Wang Chung, Words that should be words

Two independent clauses in the same sentence need to be either connected by a conjunction or separated by a semicolon. A comma cannot correctly do the job, dooming your words to be labeled as "run on." Can you find your mistake?

Oh, and there really is no debate. The hat IS disgusting.

Re: The Litos piece. With so many mid-pack Division I schools looking for home games, why don't they, you know, play each other, even in a same-season home-and-home series, or a you-come-here-this-year, I-go-there-next-year scenario? If Richmond needs a game next year and Hofstra needs one the year after that, why don't they work something out? If it was so hard for those two schools to schedule home games, couldn't they just have, you know, looked up each other's phone numbers, or put something up on the coaches' version of Craigslist?

Wouldn't that be preferable to playing Divison II or III teams? How would that hurt you at selection time when a committee member is supposedly not looking at the fact that you played a D-III team?

Or did I completely miss the point (yet again)?

Wouldn't that be preferable to things like last week's utterly pull-your-hair-out-it's-so-pointless Kansas-UAlbany game? (Start Rant: In fact, why would the NCAA condone that debacle in January (it's bad enough in November, and don't give me that it's-hard-to-schedule-games-for-the-time-between-Holiday-tourneys-and-the-restart-of-conference-play horseshit) while potentially punishing you for playing a neighboring D-II or D-III team that local fans might actually be tempted to attend? As far as I'm concerned, in situations like Kansas-UAlbany, both teams ought to be punished somehow on General Principle for violating good taste in even scheduling that game. Rant over.)

Anyone up for starting the diet next year? I'm in.