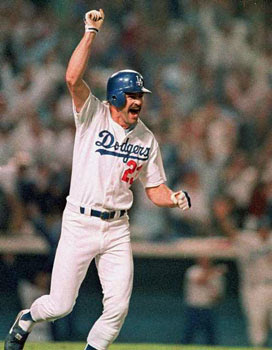 Sure, he hit one of the most memorable home runs in baseball history. But did Kirk Gibson ever pluck an air ball out of the, uhh, air and lay it up and in to win a game at the buzzer?
Hope you listened to Litos (or, more accurately, read and absorbed his words) Monday when he wrote the following: “The JMU/Hofstra game is exactly why you pay for the video feed of CAA games.”

Dude is clairvoyant. I shall now call him Dion Warwick. His gifts are being wasted on us. He should be penning predictions for the National Enquirer. I miss those predictions of my youth. Some buffoon whose claim to fame in 1984 was predicting re-election for Ronald Reagan predicting silly crap for 1985 like “Michael Jackson will announce he’s retiring from music, only to return in December as the lead singer of Motley Crue, which will record the soundtrack to Breakin’ 3: Heavy Metal Boogaloo.”

Anyway, if you didn’t pay the $4.95 for UNC-Wilmington’s webcast last night, your loss. (Oh, and a little birdie tells me that the Hofstra website will soon undergo an overhaul that will allow it to offer webcasts. I’m going to believe that my words yesterday inspired the school to take action. That’s my story and I’m sticking with it.)

I like to think I’ll be able to do justice to how the Flying Dutchmen turned a potentially gut-wrenching defeat into a holy crap moment and an 80-78 victory. But really…you should have been there, watching a webcast—good quality as far as those things go, but still nowhere near as crisp as watching it in HD, or even on our plain ol’ TV—whose inherent fuzziness added an additional surreal, is-this-really-happening vibe to the festivities.

As UNCW prepared to inbound the ball with 13 seconds left in a tie game, you should have been sitting there, in my dad’s recliner in an otherwise silent house, thinking to yourself how often you’ve wished for a steal in a situation like this and how rarely it happens.

Then you should have seen the Dutchmen swarm Chad “much better than my distant relative Brett” Tomko as time ticked away. Cornelius Vines and Nathaniel Lester surrounding Tomko near the left sideline, no timeouts for the Seahawks, nowhere to go for Tomko…maybe this could happen.

And then it did. Someone—Tony Dennison—swipes the ball and begins streaking towards the opposite basket. With no clock visible on the webcast and no idea how much time was left—what is this, soccer?—you should have been there, imploring Dennison to shoot. But then it looked like he slipped—or did he collide with Tomko? That’s right, the final sequence was so wild even those who had a crystal clear view of things had different views of what happened—and there’s Dennison sitting, a la me right now, and desperately chucking the ball towards the basket.

Air ball. But then there’s a shadowy figure, Arminas Urbutis, appearing out of nowhere, jumping up and putting the ball in and then…buzzer. Holy crap. Eat your heart out, Aurimas Kieza! It was as if this dude’s steal and this dude’s shot and these dudes' shots got together and had a baby.

Even without the dramatic finish (alas, being on a webcast wasn’t enough to land this on SportsCenter’s top 10 plays of the night), you missed one of the most enjoyable and, perhaps, pivotal games of the season. The biggest lead of the game was six (by the Dutchmen midway through the second half) and there were 13 ties and 24 lead changes. The Dutchmen didn’t so much play down to the competition as the Seahawks played up to it. UNCW will be a pretty good team’s nightmare matchup on the first Friday of March.

UNCW, which is only the seventh team this season to exceed 70 points against the Dutchmen, was so pesky Wednesday that Tom Pecora said he ordered his players to be aggressive on the final possession because he feared the Seahawks would win in overtime. That would have been the fourth straight season these teams have played an overtime game…maybe it’ll happen in 30 days. (For a more extensive take on the game, check out this excellent blog entry from UNCW beat writer Brian Mull)

A loss would have looked bad on the resume because a team that harbors hopes of playing deep into the first weekend of March—and beyond—can’t lose to a team seemingly doomed to finish among the bottom quarter of the conference. But the worst part about a loss Wednesday would have been the lack of a tangible reward for an encouraging performance.

It’s unlikely the 80 points—the third-most scored this season by the Dutchmen and only the second time they’ve hit or exceeded 80 points in a victory—are a sign of things to come. After all, everyone scores (must…resist…urge…to…make…cheap…pop…culture…joke) against the Seahawks.

But even with that caveat, there were plenty of positive developments on offense Wednesday. Even though the Seahawks shut him down for the final 12 minutes—during which he made just one of four shots from the field and scored three points—Charles Jenkins had the monster game most of us have been waiting for since the middle of December. Jenkins drained a career-best four 3-pointers in the first half on his way to a career-high 33 points. He also tied a career-high with a team-best three blocks and added five rebounds.

For the third straight game, Dennison stepped up in place of Jenkins in the middle of the second half. Dennison had no points when Jenkins went to the bench with three fouls with 12:10 left, but he scored the Dutchmen’s next six points and finished with 10 points. Dennison has scored 38 points in the last four games—37 in the second half.

And the winning basket was an appropriate reward for Urbutis, who had a brilliant second half and seems to be emerging as the player most likely to have a Roberto Gittens-esque impact late in his senior season. The undersized Seahawks hustled their way to a 16-12 rebounding advantage in the first half, but Urbutis pulled down nine of his team-high 10 boards in the second half and the Dutchmen ended up outrebounding UNCW 36-31.

The victory was additionally valuable because it allowed the Dutchmen to maintain their grip on fifth place in the CAA. Those who are much better at math than me and compile the various RPIs are very likely skeptical of the Dutchmen’s solid standing, figuring they aren’t as good as their record because their uncannily good record in close games—9-1 now in contests decided by five points or less, and really, they should have beaten Iona to make it 10-0—means the good luck is going to turn sour at some point.

But the more games the Dutchmen win like this—and Wednesday marked the fifth time this year the Dutchmen have won a game in which they trailed in the final minute—the less it is about luck. It’s about toughness—a toughness Hofstra has displayed in the macro sense as well by going 4-0 against the spectrum of the CAA since what could have been a season-ruining rout at the hands of Drexel 15 days ago.

That toughness will come in handy Saturday, when pre-season favorite VCU arrives at the Arena. I’m no psychic, I’ve got a pretty good feeling you’ll get some legitimate bang for your buck if you show up Saturday. At the least, you owe it to Speedy Claxton in his return to The House That He Built. More on that tomorrow.

Email Jerry at defiantlydutch@yahoo.com. And join the Defiantly Dutch group at Facebook today!
Posted by Jerry Beach at 6:04 AM