VCU 68, Hofstra 60 (Or: In which beggars suddenly become choosy) 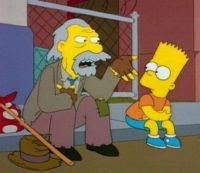 Chester Lampwick isn't greedy. As long as he's got his health, his millions of dollars, his gold house, his rocket car and victories by the Flying Dutchmen basketball team, he doesn't need anything else.

What would you have thought, last Tuesday morning in the aftermath of one of the most discouraging losses of the Tom Pecora Era, if you were told the Flying Dutchmen would lose by eight points at VCU on Saturday? My guess is you would have been satisfied with a competitive defeat that provided the Dutchmen something to build upon, as opposed to the I-don’t-even-know-where-to-begin-fixing-this vibe of the Northeastern loss.

Well, that’s what I would have thought, anyway. The wife reports that she would not, in fact, have been willing to accept an eight-point loss to VCU. Which is probably why she’s a better poker player than her risk-averse husband, but that’s neither here nor there.

So why, then, did it feel as if a precious opportunity had slipped through the Flying Dutchmen’s hands during a 68-60 loss? Given the way the week started for the Dutchmen, there is no shame in losing by eight to the pre-season favorites in an arena in which Hofstra has never won. In fact, it was the second-closest game a Pecora-coached team has played at VCU: The 2001-02 team fell to the Rams by two, but the next five regular season defeats at VCU were by a combined 66 points.

The Dutchmen didn’t lead once in the second half and didn’t get closer than four points in the final 13 minutes, so there was no reason to wonder what could have happened if not for a bad bounce here or a bad call there.

Yet after the win over Delaware Wednesday that fixed everything—or at least coaxed a lot of us off the ledge—and an encouraging first half Saturday, it didn’t seem unreasonable to believe the Dutchmen could pull off the upset.

The Dutchmen avoided the first half fade that ruined their chances against Drexel (which jumped out to a 14-4 lead and never trailed) and Northeastern (which jumped out to an 11-0 lead and, you guessed it, never trailed) and would have carried a lead into the locker room if not for Eric Maynor driving the length of the court and hitting a buzzer-beating jumper with Charles Jenkins and Greg Johnson in his face. Hofstra looked much more cohesive and patient on offense and Jenkins hit as many field goals (four) in the first half as he did against Delaware—and he only needed eight shots to do it, not 24.

And hey, this is the CAA, where it would make sense for the Dutchmen to open the week with a 23-point loss at Northeastern and end it with an upset win at VCU.

Instead, the unpredictability of the CAA was summarized hours later and 250 or so miles to the south, where UNC-Wilmington—whose porous defense seemed to give the Seahawks a real shot at going 0-fer-the-conference—surprised the Blue Hens, 75-72. That’s right. In the span of seven days, the Blue Hens beat the preseason favorites, lost to a team that literally could not shoot straight and lost to a team that hadn’t won since the day after Thanksgiving and whose 10 straight defeats had come by an average of 21 points. Trying to project this stuff is for the sadistic, I tell you.

The second half proved the Dutchmen are still the work in progress that Pecora described during a conference call last week. The pieces are there and the box score looked pretty good, but it’s just not a complete puzzle yet.

Jenkins continues to emerge from rock bottom, led the Dutchmen with 15 points and five assists and added eight rebounds, but his slump is still a 7 or 8 on a scale of 1 to 10, as he proved by shooting 1-for-8 in the second half and finishing with a team-high five turnovers. Maybe, Pecora figures, the answer is shooting less instead of more.

The Dutchmen are deep, but not yet deep or strong enough to withstand a sputtering Jenkins and a non-existent Cornelius Vines, the latter of whom fouled out after setting season lows in minutes (17) and points (six). In addition, all four shots Vines took Saturday were from beyond the arc.

Nathaniel Lester’s role keeps growing—he tied a season high with 28 minutes played and had seven boards, the third time in four games he’s had at least that many rebounds—yet his eight points came on 3-of-10 shooting.

Speaking of work in progress, to watch Larry Sanders (16 points, 13 rebounds) dominate down low was a reminder that Greg Washington is still the biggest work in progress—literally—on the Dutchmen roster. It’s one thing to be 6-foot-10, it’s quite another to be a freaking behemoth like Sanders. Washington’s suddenly stellar play in December wasn’t a fluke, but it wasn’t necessarily a sign of things come this season for the still-spindly Gee Dubs. Washington made his fifth straight start Saturday, but his minutes in that span are as follows: 29, 23, 23, 18 and 14.

He played only seven minutes in the second half Sunday, during which VCU outscored the Dutchmen 24-8 in the paint. At some point, Darren Townes will have to escape from Witness Protection to provide more depth in the front court. In the meantime, I once again humbly offer Washington my extra 25 pounds. I’m even willing to negotiate it up to 35 pounds.

Anyway, what we went through Saturday is a pretty good idea of what’s to come over the next seven weeks: Jumping back and forth between trying to minimize expectations and hoping the Dutchmen can shoot the moon—and the ball, too. Litos was impressed with what he saw in the defeat and wrote Sunday that he projects a 9-9 conference finish for the Dutchmen—and as many surprising victories as unexplainable defeats. It’s sadistic, I tell you.

Email Jerry at defiantlydutch@yahoo.com.
Posted by Jerry Beach at 6:05 AM