In which I research the CAA one year at a time 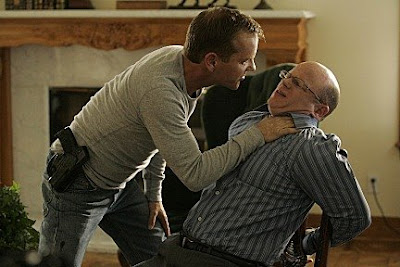 Even Jack Bauer can't get someone to tell him how the CAA season will shake out.

I have to admit: Whenever I write something about how competitive and unpredictable the CAA is, I cringe a little bit. Such traits have been standard for the CAA for years—the first- and third-place teams in the CAA have been separated by two games or less 14 times in 26 seasons and last year marked only the fourth time the regular season champ has finished three games ahead of the runner-up—so I’m not exactly breaking any news there.

To wax poetic about the unpredictability of the league is to skirt dangerously close to what Litos calls clee shay territory. And let’s face it: Most of the coaches in the league bathe in clichés. No need for the rest of us to do so. (Fortunately, Tom Pecora lapses into coach-speak far less than his rivals. And that’s not blog bias talking, other guys ‘round the Interwebs are impressed with Pecora’s candidness, too)

Plus, it’s early in the season. Has there ever been a year—in any league, going all the way back to the ECC, OK, maybe not in my case, since the 1993-94 conference season was five games long and nobody even knew it was going on—in which we didn’t spend the first quarter of the conference slate marveling at the balance of the league?

It’s not the same sport, but along the same lines, it annoys me every September when I read columns after the first week or two of the NFL season about how it’s so unpredictable and wacky. Uhh, isn’t that the point of a salary cap, to create parity and make it impossible to predict who will rise and fall? Marveling at that is like marveling at mall traffic the weekend before Christmas.

But as I scanned the CAA results and standings Saturday night, I thought to myself “Self, this is REALLY unpredictable and balanced, even by CAA standards.” Georgia State began the week 2-0 and ended it 2-3. James Madison began the week 0-2 and ended it 3-2. And as noted Monday, Delaware beat the pre-season favorite on the first Real Saturday of the conference season and lost to a team that had lost 10 in a row on the second Real Saturday.

So I wondered: Is this just par for the course, or is the CAA really even more competitive than usual this year? A pretty good case can be made for the latter.

(Special thanks to the Hofstra site, which archives game notes back to 2003-04, for its invaluable role in researching this entry)

Every team has reached the five-game point at the same time in each of the last three seasons. The unbalanced schedule was really unbalanced in 2005-06, when there were six teams with five conference games through Jan. 11 and six teams with four conference games. Hofstra and Drexel were among the latter teams, but both were 3-1. And each of the bottom four teams already had four losses through Jan. 11.

This is also the second straight season in which every team has at least one win through five games. There was at least one 0-5 team in each of the preceding four seasons.

So what’s all this suggest? Will there be a bigger gap between the top quarter and the rest of the conference, yet a bigger logjam between four and 12? Or will this be a year that the NFL would love?

Northeastern is too scary good—and UNC-Wilmington’s defense too scary bad—to expect something similar to 1996-97, when Old Dominion and UNC-Wilmington tied for first in the nine-team conference at 10-6 and American and Richmond tied for seventh at 7-9.

Yet very recent history suggests that at least one of the 5-0 teams will come back to the pack and make the middle of the league an even bigger mess than it is now. Remember the only team to get off to a 5-0 start last year? It was Delaware…which finished 9-9 and was the seventh seed come March.

All these numbers mean, for now—and, I imagine, for the foreseeable future—that the perception is once again the reality, and that the CAA is tighter than ever. Remember: Cliches are clichés because they’re true. Which, ironically-but-not-really, is a cliché in and of itself.

Email Jerry at defiantlydutch@yahoo.com. And search for and join the Defiantly Dutch group at Facebook today!
Posted by Jerry Beach at 6:38 AM