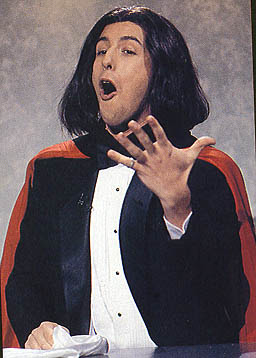 Why wasn't the Inauguration held at Hofstra? "Washington D.C. hates deviation." What does Tom Pecora want for his birthday? "Total domination."

Think about it: Hofstra was awarded the third and final presidential debate on Nov. 19, 2007. Since then, the Flying Dutchmen basketball team is 13-7 at home—a pretty good winning percentage of .650, but not as good as the pace the program set over the first seven-plus seasons of the building, when it went 70-21 (.769).

The Inaugural parade should have traveled the length of Hempstead Turnpike. Concerts should be headlined by Long Island’s finest musical acts, such as Billy Joel, Debbie Gibson, Twisted Sister and Marcy Playground.

Inaugural Balls should have taken place all over the campus: Hofstra USA…the Arena…the PFC…John Adams Playhouse…the lounge at Vander Poel Hall. Meals should have been catered by Dutch Treats. President Rabinowitz should have magnanimously offered his tickets to a student. Obama should have made his Inaugural address from the parking lot of Nassau Coliseum, soon to host nothing more than the occasional monster truck pull.

Other bits and bytes culled over the last couple days:

—Lots has been made about the strength, or lack thereof, of the Flying Dutchmen’s OOC, but if you’re thinking the conference schedule has been challenging, you’re not the only one. Entering this week, the Dutchmen have played the second-toughest schedule in the CAA, just behind Towson. Here’s the list, with the composite conference record of the school’s opponents in parenthesis:

In addition, the Dutchmen are the only team to play two teams twice this month—and Northeastern and Drexel haven’t exactly been pushovers.

Of course, a quick look at the above numbers points out that the top three teams in the conference have played the weakest conference schedule while six of the seven sub-.500 teams have played a composite schedule that is above .500. So that raises the questions: Have the Hofstras of the world been battered by tough schedules, or are they just not that good? And have the VCUs, Northeasterns and Masons of the world fattened up on easy schedules, or are they just that good?

Along those lines, the most impressive team in the conference just might be Drexel, which entered the week both in a tie for fourth overall and in a tie for the fourth-toughest conference schedule. And the team that has performed least impressively just might be Delaware, which entered the week both in ninth place overall and the owner of the ninth-toughest (or, conversely, fourth-easiest) conference schedule. Isn’t it ironic that Drexel beat Delaware last night?

As for answering the questions of what the schedules mean, you know what our hunch is going to be, at least for Hofstra. And keep this in mind: The opponents in the Dutchmen’s next seven games have a composite conference record of 24-25—and that record is considerably boosted by the presence of VCU and Mason. The other five opponents (William & Mary, James Madison, UNC-Wilmington Old Dominion and Towson) are 11-24. So there appears to be plenty of opportunity to get back on track.

—The first game in that stretch occurs tonight, when the Dutchmen host William & Mary and its appropriately named head coach Tony Shaver, who continues to break Litos’ heart by not growing back The Stache. The Tribe, a perennial league doormat, made a surprising run to the CAA title game last year but have struggled this year.

It’s been a hectic few days so I have no real game preview to offer, but I’ll go away from Litos’ advice and skip flipping a coin in favor of just picking the Dutchmen to win. Coaches hate the term “must-win” anytime before the CAA tournament, but when you’re fresh off a win over a previously unbeaten team and you’ve got the cellar dwellers coming in…it’s a must-win.

It’ll also be interesting to see (or hear, or read) who starts for the Dutchmen. Pecora said during the teleconference Monday that he’ll decide the lineup based on who practices the best. That’s quite a departure for a team whose lineups in previous seasons have been predictable as the sunrise and sunset. I’ll have more on then vs. now in the next few days.

We won’t be there tonight, but Sully Ray may pinch-blog again in between eating hot dogs and catching T-shirts…as long as he doesn’t have to be home by 9 for Lost. I wish he was making that up. I don’t even know who he is anymore. Hey Sully, here’s a spoiler: THEY’RE STUCK ON AN ISLAND!!!

—Lastly, a happy birthday to Tom Pecora, who turns 39 again today. This is the third time in his eight years as head coach the Dutchmen have played on his birthday but the first time they’re playing at home. In 2006, the Dutchmen lost at Northeastern, 89-73. In 2004—when Jan. 21 also fell on a Wednesday—the Dutchmen beat James Madison, 69-66.

I sure hope someone remembers to mention Pecora’s big day during the birthday roll call. Maybe he can even get the best seat in the house as a gift! That or a win. Either/or.

Email Jerry at defiantlydutch@yahoo.com. And join the Defiantly Dutch group at Facebook today!
Posted by Jerry Beach at 5:54 PM