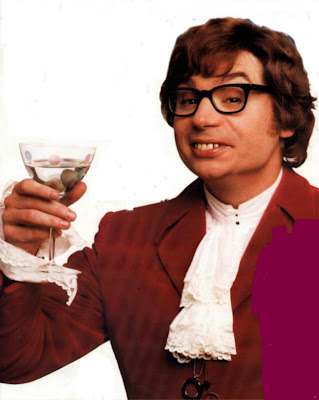 Austin Powers raises a glass to the Flying Dutchmen, even if their win wasn't quite as beautiful as Vanessa Kensington.

A starving man will eat anything and think it’s the greatest thing he’s ever consumed. Liverwurst, gruel, even a Hofstra Burger that’s been sitting under those heat lamps since the library only had 500,000 volumes.

It won’t take until a little later, when his stomach is full and maybe barking a little bit, that he’ll realize that liverwurst or gruel or Hofstra Burger from 1973 was actually not nearly as good as he thought it was. But no-longer-starving man is still grateful for the food, since, you know, eating something that Emeril or even Rachael Ray (don’t worry, I resisted the urge to post a not suitable for work picture…barely) would scoff at is still better than going hungry.

I mention this not because I’m hungry (though my wife made a great pot roast in the slow cooker) but because at around 9 p.m. last night, the Flying Dutchmen’s 66-61 win over Delaware (a game covered by, be still my beating heart, at least four daily newspapers—the Daily News, the Post and the News-Journal in Delaware, link to Newsday story further below) was the greatest tonic ever for a team starving for a win after dropping two straight conference games and four of five contests overall.

Greg Johnson was outstanding at the point, racking up seven assists and no turnovers (that’s a ratio of infinity, you know). Slumping Charles Jenkins scored 18 points. Nathaniel Lester, who for so long has seemed to be the very definition of a tweener—just a little too big and unpredictable on offense to be a guard, not big enough or forceful enough down low to be a small forward—led the Dutchmen with eight rebounds, including a pure effort grab that led to a key late lay-up by Cornelius Vines. It’s the second time in four games Lester has collected eight boards.

The Dutchmen looked like a complete team during a 15-2 run that turned a 22-17 deficit into a 32-24 halftime lead. They hit five of 10 shots and outrebounded the Blue Hens 9-5 during the stretch.

A team whose performance from the free throw line is not for the faint of heart was, shockingly, almost perfect—24-of-26, including 20-of-20 in the second half. That’s got to be the Dutchmen’s best performance from the line since at least 1956 (give or take a couple decades, of course).

Two days after Tom Pecora had to take some air out of the tires, Vines played with his familiar swagger as well as the good kind of emotion in scoring a game- and career-high 23 points. He shot and missed at will to open the second half (0-for-6) but hit three of his last four shots, including a pair of rare lay-ups. Vines set a season-high by attempting 11 shots inside of the 3-point line, a pretty notable shift for a guy who took two or fewer shots from inside the arc seven times in his first 14 games.

After hitting the second lay-up to extend the Flying Dutchmen’s lead to 58-54, Vines ran down the court with his arms in the air, extorting a predictably small Intersession crowd to make the type of noise that filled the Arena with an atypical roar—for a few seconds, at least.

The Dutchmen seemed to follow Vines’ lead. Dane Johnson did the arms thing when he came off the court after he drew a charge that negated a potential game-tying basket by the Blue Hens. And the bench—full of downcast, morose expressions most of the last five games—was so lively in the final minutes that Pecora had to threaten to turn the bench around and drive back home.

In retrospect, of course, the win wasn’t THAT good. As my wife sang to the tune of “We Are The Champions”: “No time for Blue Hens, because we are marginally better than you!”

The issues that have dogged Hofstra since mid-December haven’t been solved. The Dutchmen endured another terrible game from the field in shooting just 29.7 percent (19-of-64), their second-worst performance of the season. The Dutchmen were fortunate that Delaware shot just 30.5 percent (18-of-59) and that Marc Egerson, Jawan Carter and Alphonso Dawson, who averaged a combined 49.6 points entering the game, were a combined 6-of-37.

Jenkins led the way again—so to speak—for the cold-shooting Dutchmen by making just four of his season-high 24 shots, many of which barely grazed the rim. On the bright side, Jenkins at least got his shots Wednesday—he set a season-low in shots in each of the previous two games—and he displayed some of his Loren Stokes-like ability to fill up the boxscore even when he’s not filling the basket.

Jenkins was 10-of-10 from the free throw line, tied a season-high with a team-best three steals and committed just two turnovers after turning the ball over 15 times in his previous three games. And as the lede to this Newsday story indicates, at least Jenkins is smiling about his struggles instead of torturing himself (more on the latter in a bit).

After opening that eight-point halftime lead, the Dutchmen let Delaware hang around and eventually take the lead. The game was a one-possession nail-biter for most of the final five minutes before Monte Ross did his best Bruiser Flint imitation and got T’d up with seven seconds left.

And the depth that appeared so promising in November continues to be a mirage. Only seven players saw at least 12 minutes of playing time and Miklos Szabo, Darren Townes and Tony Dennison—who were expected to be regular starters—played a combined 19 minutes.

So it wasn’t a thing of beauty. But the rebuilding of the overall psyche couldn’t begin until the Dutchmen got a win, no matter how ugly and lacking in style points it was. And 2-2 in the CAA going into VCU looks a whole lot better than 1-3, which would have bordered on disastrous given the hot start enjoyed by the Dutchmen and the resultant raised expectations.

Jenkins, the symbol of the Dutchmen’s recent struggles, also summarized the relief of Dutch Nation. Seconds after the final buzzer, Jenkins—who spent most of the previous 40 minutes expressing his frustration by banging his right hand on the floor or on the padding attached to the basket—kneeled down at midcourt and gently tapped the “H” twice.

Email Jerry at defiantlydutch@yahoo.com.
Posted by Jerry Beach at 11:46 PM