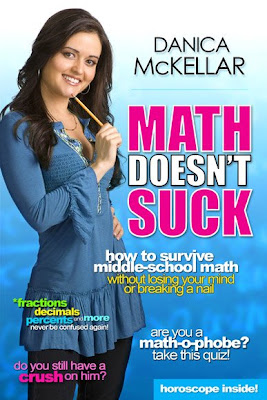 Yes it did. But then again, my tutor was never quite like this.

I always hated math class. Well, not always. I liked it in elementary school, when I was the master of 2+2 and the multiplication tables and division exercises. But then it got unbearably complicated and stupid in junior high school and beyond, when algebra and geometry (I still want to scream at the sight of a protractor) and the rest of that nonsensical garbage began to wreck me and my GPA and nearly derailed my childhood dream of attending Hofstra. (OK, that last part was a lie)

As far as I’m concerned, there is no real-life need for math outside of being able to add, subtract, multiply, divide and to know off the top of my head all the possible winning percentages in a 16-game NFL season (seriously, try me). When have you ever driven down the street, trying to figure out if you have enough money to hit the drive-thru without hitting the bank first, and cursed yourself for not paying more attention in Algebra II? “Damn you (x-3) (x+1)! Damn you!”

Where was I? Oh yeah. All that said, I must admit I occasionally wonder if I might not be an unemployed sportswriter if I only I’d taken to math a little bit better (or if I had Winnie Cooper as a tutor), because over the past decade or so, those who exist several planes higher than me on the IQ scale have figured out a way to turn complicated mathematics into new and useful ways to statistically examine sports.

The website Baseballprospectus.com is outstanding and its annual book is a vital tool in my fantasy baseball preparation (not exactly the most sterling of recommendations, given my lousy track record). The brains behind BP have since added football and basketball sites, the latter of which employs RPI maven Ken Pomeroy. Actually, he no longer compiles RPI rankings, but he continues to break down teams and conferences at his site.

One thing is clear in looking at his analysis of Hofstra and the CAA: Ken is firmly on the Flying Dutchmen bandwagon. He picks the Dutch to finish third in the CAA at 13-5 and 22-7 overall. Pomeroy has VCU and George Mason finishing tied for first at 15-3. That's great news for Mason, because as you know, earning a share of the regular season crown is as good as winning it outright (third question in the link).

You can see Pomeroy’s projections for every CAA team by clicking on the CAA link. You should know, though, that his projections don’t match the predictions that he lists on the right-hand side of the page: He’s predicting only three conference losses for Hofstra (on the road to VCU, Drexel and Mason) and an overall record of 24-5, which would be the Dutchmen’s best ever at the Division I level and the program’s best mark since the 1961-62 team went 24-4. (The Bracket Buster game in February is not included among his projections or predictions)

Even going 15-3 is still only good enough for third in the predictions: According to Pomeroy’s predictions, VCU and Mason will both go 17-1 in conference play. Hofstra is predicted to hand VCU its only loss when the two teams meet in Hempstead while Mason is pegged to fall to VCU.

Pomeroy explains that the difference between projected record and the predicted record “…accounts for the unexpected results that will inevitably happen during the season.” Aha! Another difference between the math geniuses and the rest of us: They build in a margin for error with predictions while we just blindly pick teams one through 12.

Pomeroy doesn’t expect or predict a banner season for the CAA: The top four teams are the only ones projected to finish above .500 and five are projected to lose at least 11 games, with UNC-Wilmington bringing up the rear at 2-16. Ouch. The predictions are even uglier, with a mind-boggling eight teams slotted to finish below .500 in conference play, “led” by UNC-Wilmington at 0-18. I’m not sure, but I think two-thirds of the league finishing under .500 in conference play would ruin any at-large chances.

Pomeroy’s projections/predictions are as follows:

The projections/predictions by Pomeroy are, uhh, a bit different than the consensus from mid-November:

What’s all this prove? Not much, not yet anyway. There’s still a whole lot of basketball to be played and more projections and predictions to be tested. But come March, maybe we’ll all be reminded we should have taken math a bit more seriously in high school.

Email Jerry at defiantlydutch@yahoo.com.
Posted by Jerry Beach at 5:27 AM

Winnie has a new book out. I wish I was that smart!