Hofstra 61, Stony Brook 56 (Or: Can the Arena undergo a year’s worth of renovations, thereby pushing the Dutchmen to the PFC?) 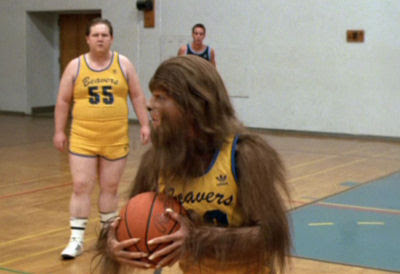 Stony Brook's vaunted recruiting class did not feature werewolf Scott Howard, above.
Tom Pecora saw it coming before the rest of us, which is why he’s a well-compensated, well-dressed Division I coach and I’m an unemployed sportswriter typing this in shorts.

The Flying Dutchmen had extended their 11-point halftime lead to 13 and seemed more likely to double that advantage than lose it against a Stony Brook team that had been within one possession twice all night when Pecora called time out with 16:18 to play Wednesday. He saw the Dutchmen open the second half in a 2-for-8 funk from the field and probably sensed the additional momentum the Seawolves could gain in a claustrophobic, hostile building straight out of Hollywood central casting and wanted to nip any rally before it began.

Through no apparent fault of his own, he didn’t, and the rally not only began but built to a near-deafening crescendo as the Dutchmen—not to mention the handful of us hanging out in enemy territory—had to sweat out (it was like one million degrees in there) a 61-56 win that wasn’t clinched until Greg Washington—or, as Michael Litos points out today, GREG FREAKIN' WASHINGTON!!!—hit two free throws with eight seconds to play.

The high-powered offense that threatened to ring up triple digits on Towson Saturday was nowhere to be found, especially in the second half, when the Dutchmen shot an ice-cold 4-of-22. That’s right: The 2-for-8 stretch was as good as it got.

Actually, that’s not true. The Dutchmen made two of their first five shots to open the half. Then they missed six in a row over nearly eight minutes before Armanis Urbutis hit a layup to give the Dutchmen a 49-36 lead with 10:01 left. Then they missed two shots over the next three-and-a-half minutes before Cornelius Vines hit a 3-pointer for the final field goal of the game.

Hofstra missed its final six shots and scored its final eight points from the free throw line, though those points were nostalgically torturous: The Dutchmen were 15-of-27 from the line in the second half, including 3-of-8 after Vines’ 3-pointer before Charles Jenkins and Washington combined to hit five of their final six freebies.

Fortunately for Hofstra, the Seawolves were almost as errant and had no teenaged werewolf to lift them to a dramatic last-second victory: Stony Brook shot just 28.8 percent overall, including 27.6 percent in the second half, and was 12-of-20 from the line in the second half.

It wasn’t quite the momentum-building victory one would have preferred after the yup-they’re-for-real win over Towson. But not every win is going to be one worth savoring and placing in the ol’ time capsule.

That’s not to say the victory was without value. Good teams find ways to win games in which they don’t play well. Plus, playing at Stony Brook is probably as close to a conference game environment as the Dutchmen are going to find this month, especially with UMass stumbling along.

Just like last year, the game grew increasingly physical in the latter stages, with at least two instances in which players had to be pried apart following the whistle. In addition, Pritchard Gymnasium is going to be the difference in multiple America East victories for the Seawolves this year. That place is a pit, and I mean that as the highest of compliments. It’s loud and the fans are right on top of the action and I can only imagine how difficult it is to communicate in such an environment. It makes me pine for a return to the Physical Fitness Center, except even the PFC seems like a cavern compared to Pritchard.

This wasn’t a conference game, but just like on the road in the CAA, Pritchard is place from which you’re grateful to escape with a win, no matter how ugly it might have been.

The win also served as a nice reminder—to the Dutchmen as well as those of us driving the bandwagon—that the bus isn’t guaranteed to get on the highway and drive to a first-round site the third weekend of March.

As promising as this team has looked for most of the past month, it’s still a fairly inexperienced bunch (the two seniors who see the most playing time, Dane Johnson and Darren Townes, are transfers and the four four-year seniors bounce back and forth between the floor and the side of a milk carton) prone to the familiar free throw woes as well as head-scratching hiccups.

Litos also notes today that aside from Jenkins and Zygis Sestakos, the Dutchmen are shooting 54.6 percent from the line. That inability to hit throws that are free catches up to EVERYBODY in the end. Just ask Chris Douglas-Roberts.

The Dutchmen looked as if they’d blow Stony Brook out of the barn in the first half. They took a 10-point lead less than 10 minutes into the game and shot 55.2 percent in the first 20 minutes. Jenkins was clearly the best player on the floor—the dude goes from zero to 94 faster than anybody I’ve ever seen—and had one of those you’ve-got-to-be-kidding me moments when he drove the lane, whirled, got caught up in a handful of players and somehow hit a layup anyway.

When Stony Brook brought in its mammoth center Desmond Adedeji—who is such an awful and awkward free throw shooter that he makes his idol, Shaquille O’Neal, look like Calvin Murphy—Pecora responded by putting in Washington and Dane Johnson. It was probably just a coincidence, but it was pretty cool when those two were the first players on to the court for the Dutchmen following the timeout. Seemed to set the tone.

I thought there should have been some really dramatic music accompanying their entrance, like “Gonna Fly Now,” minus the awkward hug. Or maybe “Welcome To The Jungle,” minus one of the guys completely losing his mind and needing 15 years to make a pile of crap that turns into one of the epic bombs of all-time. Or at least “Beat It,” minus, well, you know, just about everything. But the game was at Stony Brook and I don’t think the powers that be there were in the mood to add mood music for the opposition.

Where was I? Oh yeah. Johnson and Washington combined for a ridiculous nine blocks, including six by Johnson—one of which he punctuated with a Dikembe Mutumbo-esque wag of the pointer finger, a gesture for which he was immediately warned by the ref. Yet the leading rebounder for the Dutchmen was Jenkins with seven and Stony Brook held a 42-40 rebounding edge—shocking considering how often it seemed as if multiple guys in blue uniforms were swarming a poor lonely Stony Brook guy down low.

The Dutchmen should have routed Stony Brook, but it was a one-possession game with 39 seconds to play. How did that happen? Who knows? But Pecora saw it happening before anybody, which has me figuring he spent today and will spend tomorrow making sure it doesn’t happen again Saturday against St. Francis.

Email Jerry at defiantlydutch@yahoo.com.
Posted by Jerry Beach at 11:53 PM

I couldn't get past the picture. And I mean that in a good way. Teen Wolf rules! Why isn't that on TNT more often? If you were to add in a Back to the Future image and something from Family Ties you'd take me all the way back to my (gasp) conservative Eighties days as a budding Alex P. Keaton (though don't let that get out, or I'll have to cake-sit you. Hey, is this thing on?).

Continuing off-topic: my reverence for Teen Wolf is such that I won't even watch Teen Wolf Too, and held a grudge against Mallory's brother for years because of it. But Jason Bateman came all the way back and fully redeemed himself in Dodgeball as Pepper Brooks, the best fictional sportscaster ever.