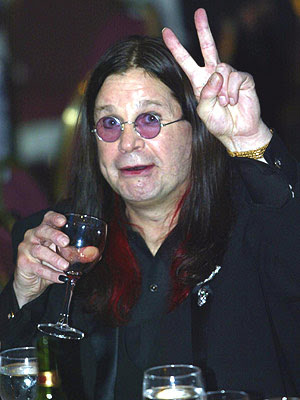 Ozzy Osbourne indicates how many games he thinks Hofstra will win in the NCAA Tournament. Which is good, 'cause who can understand what he says anyway?
Sorry for the lack of a post Monday. The last three days have been crazy at Defiantly Dutch World HQ, with actual paying work making its way across my desk, a visit to the dentist for Root Canal 2: Electric Drillboogaloo and the wife and I spending far too many hours shopping for and preparing the HQ for new furniture.

True story: Dante’s original manuscript for his Divine Comedy mentioned 10 circles of hell, the last one of which was shopping for furniture. But his editors said 14th century readers didn’t have the attention spans and were too busy arguing over global warming and fearing the day they’d fall off the edge of the flat Earth to read about 10 circles of hell, so he had to axe it to nine. I swear. I learned it in English class.

Anyway, for a little while Saturday night, I was worried root canal and furniture shopping had met, courted each other, fallen in love, gotten married, had a baby and named it Hofstra-Towson. I was suckered into spending the $5 for the Towson webcast of the game, and not only was it impossible to get in at 7 p.m., but when the game finally appeared on my screen, Hofstra was losing 12-2.

Worse yet, a few seconds later, I realized I’d paid $5 for a webcast that had all the quality of a basketball snuff film. I mean, seriously, I understand the need to create new revenue streams in this happy happy joy joy economy, but c’mon. At least make it so it’s possible to tell the teams apart.

The webcast got no better, but fortunately, the Flying Dutchmen did in a 90-81 victory. (Also, nobody was hacked to pieces) All the usual caveats apply about how it’s only one game and there’s still 17 games left in the conference season and a whole lot can change between now and the next CAA contest and Towson, while solid thus far, is still a consensus pick to finish in the bottom third of the conference.

But still, if you’re the type of person who likes to plan ahead and hates being rushed and likes to laugh at the harried and irresponsible and panicked, I’d go ahead and book a reservation on the Hofstra bandwagon. Cause it may just get as crowded as the Port Jefferson-Bridgeport ferry on Christmas Day (which, as a harried and irresponsible and panicked individual, I always make at the last possible second).

First Saturday of December and all, this was as thorough and encouraging a victory as I’ve seen (or barely seen) in a long time. We all remember Hofstra victories where the Dutchmen got hot from 3-point land—and the vaguely unsettling feeling engendered by those wins, that knowledge that somewhere over the hill, maybe even in the same game, there was an extended period of time awaiting the Dutchmen in which they went cold from beyond the arc and couldn’t find another way to create some offense.

But such worries were minimal in the first half Saturday, even though all seven of the Dutchmen’s 3-pointers came from two players—Cornelius Vines was 5-for-7 and Charles Jenkins was 2-for-2—and though Zygis Sestakos (0-for-5), Tony Dennison (0-for-2) and Nathaniel Lester (0-for-1) combined to miss all eight of their 3-point shots.

Typically, you’d fear the market correction on Vines and Jenkins, but the pre-season hope that this would be a deeper and more versatile Hofstra team was proven correct again in the second half, when the Dutchmen went 2-for-9 from 3-point land yet still scored 41 points.

More than half the points in the final 20 minutes were scored by the “bigs,” including five apiece by Dane Johnson and Miklos Szabo (who hit one of the 3-pointers) and two by Arminas Urbutis. No one looked (or sounded) as good, though, as the suddenly emerging Greg Washington, who had nine points and nine boards in the second half alone on his way to his second straight double-double.

The Dutchmen also got a where-in-the-hell-has-THIS-been performance from Greg Johnson, who committed just one turnover in 22 minutes—one minute more than he’d played combined in Hofstra’s five previous games against Division I foes—and was 6-for-8 from the free throw line in the second half.

Speaking of the free throw line, the Dutchmen were 10-of-10 from there in the first half and 25-of-31 overall (80.6 percent), a remarkable performance for a team that had shot below 50 percent from the line in its last two games and had yet to even reach 70 percent in a game once this year.

Other stats as fun as they are encouraging: Five players scored nine or more points, eight played at least 13 minutes and the Dutchmen outrebounded Towson 39-30. And despite the 90 points, it wasn’t a perfect game on offense. Dennison scored just two points on 1-of-6 shooting. Darren Townes started but played just eight minutes—none in the second half—after picking up three fouls.

As good as the Dutchmen looked against Fordham and in spurts against Manhattan, it needed to happen against a conference foe to lend it an additional air of legitimacy. There’s no easy way to beat the Dutchmen and they’re nowhere near a finished product.

These guys are for real. Get on board. I’ve got a feeling the bandwagon is going to begin filling up pretty soon.

Email Jerry at defiantlydutch@yahoo.com.
Posted by Jerry Beach at 8:10 PM