In which Mike Francesa says Hofstra cannot win the CAA, thereby all but guaranteeing a championship this season for the Flying Dutchmen 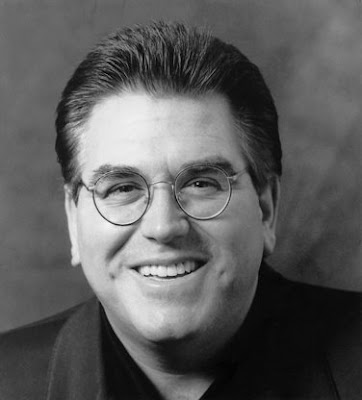 You'd smile too, if you were never wrong.

I guess I should open this bashfest of Mike Francesa by saying he’s always been pretty good to Hofstra and the men’s basketball program in particular. Francesa and Chris Russo were usually complimentary of the University whenever they broadcast live from Jets camp. Francesa and Russo broadcast the America East championship game live for WFAN from Hofstra in 2000 and 2001, which lent a huge air of legitimacy to the festivities.

Jay Wright was a regular guest on Mike and the Mad Dog in his final two seasons, and the hosts have regularly found time for Tom Pecora over the last eight years—a pretty cool thing to do by a couple of guys who thrive on talking about the headline sports and personalities and for a team that is, more often than not, a rumor on its own campus, never mind the packed New York scene.

Francesa and Russo have divorced, but apparently they’ve agreed to share custody of Pecora, who appeared on Russo's XM show a few weeks ago. It was Francesa’s turn Wednesday, when the newly solo host of the WFAN afternoon drive show interviewed Pecora, reminded us all why it’s so difficult to listen to him (Francesa, that is) and provided the best evidence yet that Hofstra fans should make preliminary travel plans for the first weekend of the NCAA Tournament.

Thank goodness YES not only simulcasts Francesa’s show but also airs a “best-of” every night. Thank goodness, because I was in the car with a friend, who in turn was on the phone, which in turn made it difficult to hear the interview, which in turn necessitated watching the clips show at 11 p.m. (And along those lines, thank goodness for crappy brakes, because if my car had functioning brakes, I would have driven to my lunch appointment and listened to satellite radio. Viva la crappy brakes!)

Thank goodness because the pomposity, hypocrisy and unintentional hilarity of Francesa need to be seen, not heard, in order to be fully understood. And Pecora’s bemusement and good sportsmanship Wednesday just could not translate over the radio.

Francesa’s “interviews” should be required listening for every journalism student, because they’re living, breathing examples of what interviewers shouldn’t do. His questions are really just rambling statements and his interviewees are window dressing placed there to absorb his blustering verbiage.

It took Francesa about 10 seconds to interrupt Pecora:

Mike: “Welcome in the head coach of Hofstra, Tom Pecora. Tom, welcome.”
Tom: “Thanks Mike. [Next words are inaudible because Francesa interrupts him]

Francesa’s world-sized ego (that New Yorker piece is long but well worth the time investment…great stuff), dueling agendas and contempt for just about everyone not named Mike Francesa—but particularly ink-stained wretches who produce the work that he comments upon—makes it nearly impossible to listen to his show.

“I could do that job on one foot,” Francesa told Newsday in 2004. “You have all day to work on your story, while I’ve gotta react 25 hours a week live. God, that’s an easy job.”

Of course, what did Francesa do throughout the interview with Pecora? Stare down at a couple newspapers as well as a packet of notes that I imagine was the Hofstra pre-game hoops release.

Francesa also told Newsday that talking to fans on the air is “…part of the job, but they need to remember that we’re the experts here.” Which, of course, explains why he appeared to have no idea Davidson star Stephen Curry was held scoreless last week against Loyola (MD).

Mike: “And the Pride [editor’s note: All would be forgiven, Mike, if you just referred to Hofstra as the Flying Dutchmen] are off to a 4-1 start. And Tom’s got himself another flashy guard in this Charles Jenkins, right? When you’ve got a college guard scoring 20 points a game, that’s a flashy guard, ‘cause you don’t get a lot of guys in college scoring 20 points. He’s averaging 23. That might not mean much to the kid down with McKillop. Other than that, that’s pretty good, 23 points a game.”
Tom: “[Curry] had zero the other night, didn't he? You heard about that game?”
Mike: “He had zero points?”
Tom: “Yeah. They played a team and the team put two guys on him and he didn’t score. But they lost by 30. So they put two guys on him.”
Mike: “Well why would you do that if you’re a coach?”
Tom: “I don’t know, I’m just telling you that’s what I heard.”
Mike: “And Bobby won by 30?”
Tom: “Yeah. He put him in the corner with the other two defenders.”
Mike: “Well, I mean, if you’re gonna do that, what…what…what…wouldn’t you, after the game, go up to the coach and say to him ‘What were you trying to prove?’”
Tom: “I don’t know, I didn’t do it, Mike." [laughs]

Eventually, after digressing into a rant about how unprepared Greg Oden is for the NBA, Francesa finally got back around to asking Pecora about, you know, college basketball in the area and his team in particular. Pecora mentioned that the Dutchmen travel so much in the CAA that they like to play metro teams during the non-conference slate.

That inspired the following:

Mike: “Your president’s gotta get—listen: He’s a shrewd guy. He got a debate in his building. He’s got a medical school opening at Hofstra. But one thing he’s gotta do is he’s gotta get his act together and realize you need to be in the Atlantic 10. You cannot be in a league where every year you’ve gotta play most of your games in Virginia and get beat up by those Virginia schools…"
Tom: *shifts in his seat, arches his eyebrows, clearly thinking of ways to turn this into inspirational fodder for the Dutchmen*
Mike: “…and get reffed out of the building by those Virginia schools and then go play the tournament in those Virginia schools. You’re never going to win there. It’s impossible. Your best Hofstra teams…"
Tom: *licks lips, looks away* “Well, anyway…” *laughs and pats Francesa on the shoulder*

In Francesa’s defense, it took me all day to find the Hofstra basketball media guide and turn to page 138.

(I just included that because it’s always appropriate)

Yeah, but I figure it just got a lot easier. Like most blusterous know-it-alls, Francesa doesn’t know nearly as much as he thinks he does. I remember the smug certainty with which he believed the Yankees would not blow a three games to none lead to the Red Sox in the 2004 ALCS. (Of course, in fairness to Francesa, that had never happened before) He once said Paul McCartney was a better guitarist than John Lennon. Except McCartney’s a bassist. (In other news, I write better with my left hand than Sully Ray.)

Earlier this season, Francesa dismissed the surging Tampa Bay Rays by asking those who thought the Rays were for real to come back to him in August. On Aug. 1, the Rays led the AL East by three games. On Oct. 27, the Rays lost to the Phillies in the fifth and final game of the World Series.

I remember driving around in the early part of the 1996 NFL season, when the Jets—fresh off a 3-13 season—were looking even worse in their second and final year under Rich Kotite. Someone called in and wondered what the Jets would do if they “earned” the no. 1 draft pick again.

Francesa and Russo began hollering at the guy, treating him as if he’d just said he hated puppies and kittens and the ice cream man, and Francesa boldly declared there was no way in hell that was happening and hung up on the guy. I always hoped that guy called back in January, after the Jets went on the clock with a 1-15 season, and told Francesa he had no idea what he was talking about.

So if—nay, when—Hofstra wins the CAA in March, Francesa will have Pecora on the day after the title game and he’ll a.) never mention he guaranteed the Dutchmen could not win the conference, b.) act as if he knew it would happen all along and c.) make it all about him.

“Listen, Tom, that kid you’ve got there, Jenkins…that’s the kind of star who can carry you to a championship, and that’s what he did. I was saying that to you in December. I knew it all along. You went down there and beat up those Virginia schools just like I figured you would.

“But listen, Tom, I was watching that game on ESPN and thinking about how I broadcast the game in 2000 and 2001. Your president’s a shrewd guy, he got a debate, he's got a medical school. But one thing he’s gotta do is he’s gotta get his act together and realize you need to host the conference title game…”

Email Jerry at defiantlydutch@yahoo.com.
Posted by Jerry Beach at 7:13 AM

Interesting stuff. I have only listened to him a handful of times since Mad Dog left. I've listened to Mad Dog a few times, too, but I'm more into the baseball channel on XM.