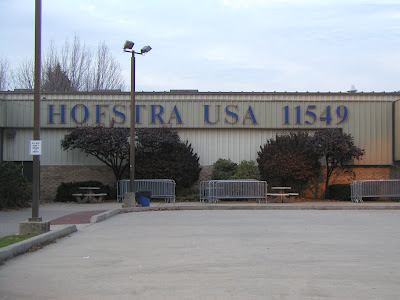 That the first snowstorm of the 2008-09 academic year occurs on the very last day of the fall semester—and the day after graduation—is even more ironic (in that it’s not really ironic at all) than rain on your wedding day. Snow days as a kid were gifts from the weather gods. Snow days at Hofstra were unspeakably joyous occasions.

After all, as a kid, a snow day usually meant some shoveling of the driveway. No fun, that. And if you had a mother who freaked out at the sight of snow (hi Mom!), you needed a ride to go sledding. (Of course, no matter what, there was The Price Is Right at 11 a.m.)

But there was no shoveling at Hofstra (If I recall correctly, most shoveling and plowing of campus grounds was usually put off until the temperature hit 60 degrees…just like every apartment complex I’ve lived in since graduation). There was, however, hiking over to the field across the street from the Netherlands to play football. That’s no longer possible, as most—if not all—of that land has been turned into dorms. Damn you progress! Damn you!

After football, there was dinner at the only warm and open place on campus…Hofstra USA. Sure, the wait was epic and the food really not all that great, but what else were you going to do?

Most of all, there was the feeling you were getting away with something. I mean, my wonderful mom and dad were spending a lot of money to get me a great (snicker, snicker, snort) education. Yet here I was on a school day—not shoveling, playing football, feeding my face at a packed sports bar and not cracking open a single book—all WITH THE APPROVAL OF THE SCHOOL!

Anyway, with that odd bit of snow-covered nostalgia out of the way, here are some bits and bytes heading into the weekend:

—We’re deep into basketball season here, but we’ll be rooting tonight for Richmond against Montana in the I-AA National Championship Game. After all, it’ll be a pretty exclusive group of people who will get to say they saw the future national champs throttle Hofstra in the driving rain…even if we were only there for a half.

—Big game tomorrow at UMass, or, as Michael Litos prefers it to be called, Massachusetts. On the abbreviation for a moment: It’s a New England thing. We’re busy up there in the middle of nowhere, shoveling snow 13 months a year, so we don’t have time for elongated school names with more than three syllables. Connecticut is never referred to as Connecticut. It’s always UConn. Conversely, Central Connecticut State University is always just Central and not CCSU. Syllables are for people who aren’t multi-tasking 25 hours a day.

Where was I? Oh yes. UMass. With four losses by four points or less, the Minutemen are the anti-Dutchmen, who have won four games by five points or less. But UMass is fresh off a 61-60 win over defending national champ Kansas and Litos believes this will be a huge barometer game for a Hofstra squad that has won eight in a row against some less-than-stellar competition.

Today, Litos suggests Dane Johnson will be the key player as the Dutchmen try to neutralize a deep and big UMass lineup that features four players averaging at least 11 points per game and three players 6-foot-7 or taller averaging at least 14 minutes per game. (Litos also has the line of the year in preaching caution with Greg Washington, or, as we call him here, Gee Dubs: “…[H]e is still so skinny he doesn’t have a sideways.”)

In addition, the Minutemen will welcome back 7-foot-1 Luke Bonner, who has missed the last month with a knee injury. However, UMass fans say he is more likely to chuck 3-pointers than bang underneath the basket. Hey! That sounds familiar!

UMass is led by Boston University transfer Tony Gaffney, who ranks among the nation’s top three in both rebounding and blocks. His emergence from anonymity to stardom is the subject of a feature in today’s Boston Herald. Says teammate Ricky Harris: “A lot of people don’t know about him. He’s coming in and sneaking up on guys and guys are like ‘Whoa, who the hell is Tony Gaffney? Where’d he come from?’ That’s good for us.”

Hmm. Maybe the Minutemen aren’t the anti-Dutchmen after all.

—As for the most pivotal player Saturday, I’m going to guess it won’t be Johnson but Miklos Szabo, who is today’s pick to click (yes, that’s an oft-used phrase, but it sounds better than Guy Who Will Be A Big Contributor or something else awkward like that).

Szabo’s minutes the last five games have gone 31-30-28-15-8. That’s a trend inconsistent with his promise and one that obviously can’t continue much longer. Nor can this: Szabo had 28 rebounds off the bench in his first three games and only 17 in four games as a starter. At the Blue-White scrimmage in late October, I saw a Szabo who was a big and annoying pest down low. He’ll have to be that guy again and produce a double-double if the Dutchmen are going to win Saturday.

—Dick Weiss wishes the Flying Dutchmen were in the Holiday Festival instead of Massachusetts this weekend, especially since there won’t be much written about them once the conference season starts. Uhh, Hoops, you know you can help change that, right? Anyway, Weiss also thinks Hofstra’s long-term home should be the A-10, albeit after at least two of the 14 schools in the A-10 (I guess A-14 sounds like a youth basketball league or something) move elsewhere.

—I’m no good at predictions, but outside of getting blown out by 30 or suffering a key injury, there’s no real downside to this game for the Dutchmen. There would be some value in a competitive loss on the road against an A-10 school fresh off beating the national champ. And a win? That’d get a whole lot of people believing. If you’re like us and not heading up there, you can get information on watching a webcast here. Hopefully the quality is better than Towson’s snuff film.

Email Jerry at defiantlydutch@yahoo.com.
Posted by Jerry Beach at 8:16 PM