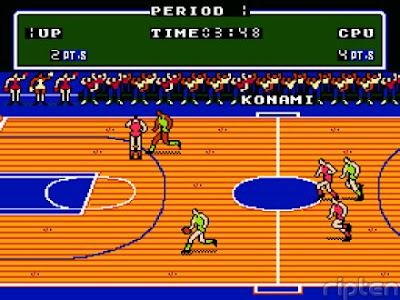 UMass prepares to end another fast break by hoisting and making yet another 3-pointer in a drubbing of Hofstra. In related news, was there any cooler voice in video games than the one that made "Double Dribble" into one word?

If all you saw of the Flying Dutchmen’s 97-81 loss to UMass Saturday was the box score, you might think Hofstra—which had its eight-game winning streak snapped—had one of those defeats in which it could find plenty of positives.

The 81 points were the second-most of the year for the Dutchmen, who played UMass even in the second half (49-49). Hofstra once again displayed its new-found front court depth by racking up an incredible 61 rebounds, six shy of the school record set during the 1954-55 season, and pulling down 36 offensive boards, the most in at least 20 years. Last year, the Dutch had 13 games in which they had 36 or fewer rebounds—offensive and defensive combined.

Miklos Szabo had a monster game with 10 points and 17 rebounds while Greg Washington (13 points, seven rebounds) continued his star-making emergence and Cornelius Vines (21 points, including five 3-pointers) continued to evoke memories of Antoine Agudio. And it would have been difficult for anyone to slow down the Minutemen on a day in which they shot a Double Dribble-like 15-of-26 from 3-point land.

The truth, unfortunately for the Dutchmen, was not in black and white. It was in color right there on the laptop—at least until there were six or so minutes left, when the UMass video feed went out, leading me to wonder if the broadcasters had invoked the mercy rule.

The Dutchmen collected 36 offensive boards because they shot 31-of-85 from the field, which is a statistical way of saying that had the game been played on a farm adrift at sea, they would have had a hard time hitting the broad side of the barn or the water. Each half featured a stretch in which Hofstra missed six straight shots.

Szabo’s double-double was not nearly as dominant as it might have looked: He collected his 10 points on 3-of-11 shooting from the field, including 0-for-4 from 3-point land, and even air balled a free throw attempt in the first half.

UMass was so dominant offensively that it was already up 22 before Tony Gaffney, who entered the game as one of the nation’s top post players, finally hit his field goal with 16:19 left in the game. (Of course, it sure helped that 7-foot-1 Luke Bonner hit three 3-pointers and drew four charges in his first game in a month) The Minutemen led by double digits for the final 30 minutes and were up 28 (96-68) with 3:24 to play before allowing the Dutchmen to go on a 13-1 run that made the final score much closer than the reality.

Tom Pecora certainly wasn’t fooled by the margin of defeat, and he made it clear afterward the Dutchmen were headed for a couple intense days of practice before hosting Iona Tuesday. And while fans and followers of UMass wonder if a victory like this indicates the program is close to returning to its glory days of the ‘90s, the lopsided loss provided a reminder that the Dutchmen—while still better than just about anybody expected—still have a lot of questions and not a whole lot of time to answer them before conference play really begins.

(Yes, that’s right: For the second time in four weeks, three Massachusetts newspapers covered a UMass-Hofstra game. What a concept.)

Like this: Who are the Dutchmen, particularly on offense? The revamped front court has not yet manifested itself in consistent production. Szabo has shown bits and pieces of an all-around game and Washington—who continued to display a deft shooting touch both down low and from beyond 10 feet in going 6-of-9 from the field Saturday—appears to be the real deal with each passing day.

But where, exactly, are Dane Johnson and Darren Townes, who were expected to anchor the revamped front court? Johnson set a season-low by playing just seven minutes—only the fourth time in 40 games he’s played less than 10 minutes. At least he had six boards in limited action and the excuse of early foul trouble (he picked up all three fouls in the first 20 minutes).

The increasingly regular disappearance of Townes is far more worrisome. For the third time in the last four games, Townes (two rebounds, two fouls) played just eight minutes, including less than three minutes in the second half. He didn’t slip into single digits in the minutes column once last season, when he averaged eight points and 6.7 rebounds per game. He’s reached eight points just once and six boards just three times this season.

As good as Washington has looked lately, he’s not yet a 30-minute-a-game guy. If Johnson and Townes can’t provide the Dutchmen 20 minutes a game, who can?

The three-headed backcourt, meanwhile, is a two-man show thus far. I’m going to predict that Vines follows in the footsteps of the mysterious Demetrius Dudley and becomes only the second player in Hofstra history to score 1,000 points in two seasons.

But Charles Jenkins’ second straight subpar game—by his standards, anyway—further underlines the need for somebody to lessen his load. Jenkins has doubled as the point guard most of the season and has led the Dutchmen in assists eight times, but the dual responsibilities may be affecting the rest of his game: Jenkins has made just eight of his 29 shots the last two games and has been limited to 12 points or less in consecutive contests for the first time in his career.

Right now, it doesn’t look as if the ice-cold Tony Dennison—who was 2-of-11 shooting Saturday and is shooting just 32 percent (30-of-94) through 10 games—is ready to absorb those duties. He’s also got just eight assists in 10 games. Does Greg Johnson, who was limited to less than 10 minutes for the fourth time in the eight games he’s played, emerge at Dennison’s expense?

Defensively, meanwhile, the Dutchmen earned some well-deserved accolades for their performance during the eight-game winning streak, but the two best teams on the non-conference schedule racked up 195 points. Griping over the schedule is a pointless exercise, and given the questions that still persist about the Dutchmen, it’s tough to blame Pecora for hoping to build his team’s confidence instead of its RPI in December. Still, even though there’s no Clemson or UMass awaiting Hofstra in the CAA, it’s fair to wonder how the Dutch will fare against the upper echelon in the conference.

One encouraging sign: The last time Pecora and the Dutchmen were here, they went on to the best season in program history. Michael Litos had his prognostication shoes on last Tuesday, when he reminded readers of the 2005-06 Hofstra team, which had won four games by 10 points or more before it visited VCU and got waxed 87-64. The Dutchmen responded by winning 20 of their next 23 games before falling to UNC-Wilmington in the CAA final and getting screwed by the Selection Committee six days later.

Email Jerry at defiantlydutch@yahoo.com.
Posted by Jerry Beach at 6:22 AM

It was the same voice that said "free throw" as one word, which sounded like "pfleeeflough." And then that weird halo thing would float up and down over the hoop.

Enjoy Iona on Tuesday. Iona hasn't been the same since Jeff Ruland has been gone. I mean, I don't know how they've done as a program since then as far as wins and losses and I honestly don't care. But Ruland made for a hell of a quote. He might have been oh, just a little crazy, too. But he spoke his mind, which is way more than most of these bland characters do.

Jeez, after looking at the Dutch side of that box score, I'd say the Konami programmers weren't the only ones who had trouble saying "free throw."