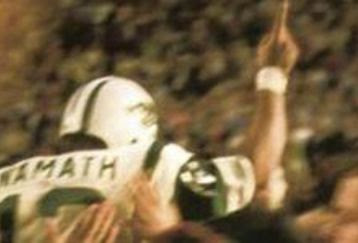 You just led the New York Jets to the most stunning upset in pro football history. What are you going to do next, Joe Namath? "I'm going to Hofstra USA!"

It’s true. Hofstra sits atop the standings page at the CAA's official site. Oh sure, conference play hasn’t started yet (T-minus four days until the lone conference game until January, which is a lot like allowing a starving man into a five-star restaurant and kicking him out after salad), so the standings are only based on overall winning percentage.

Never mind that nine CAA teams have played more games than Hofstra. And sure, of the four teams the Flying Dutchmen have beaten thus far, the one most likely to advance to a national tournament come March is Division III Old Westbury.

Nor has Hofstra been racking up the style points against Division I foes. The season opener against Clemson is shaping up to be the Flying Dutchmen’s showcase non-conference game—and it was one they dropped by a mere 29 points. Their three wins—against teams that are a combined 8-10—have all been by four points or less. If not for the regular late-game brilliance of Charles Jenkins, the Dutchmen would probably be 1-4.

But it’s those narrow wins that provide the reason for early encouragement. Entering play Tuesday, there were 137 mid-major teams that had won at least three games. (I didn’t count the BCS conferences, because, well, screw them. They’ll get 32 at-large bids and any Big Six team with a .500 record will play in a postseason tournament. So who cares about their early-season performance, since it doesn’t matter at all come March?)

Anyway, of those 137 mid-majors, guess how many have won three games by four points or less. (Pause as you ponder)

Two. Hofstra and Mercer—the latter of which is ranked ninth in SI.com’s mid-major poll and 10th in the Collegeinsider.com poll.

Hofstra is, understandably, nowhere to be found in the SI.com poll and a distant 41st in the Collegeinsider rankings (alas, “We’re no. 41!” doesn’t quite roll off the tongue). But the resiliency is notable, especially in a CAA that, as Michael Litos pointed out Monday, hasn’t gotten off to a very promising start overall.

The consensus top four preseason picks have all stumbled. Overwhelming favorite VCU is in a lot of trouble if Eric Maynor is really playing as if he’s disinterested. Northeastern scored 37 points in a loss to South Florida, which is ugly but excusable, right after it lost to former America East foe Boston, which is not quite as acceptable.

Old Dominion, 11-7 in games decided by four or fewer points the previous three years, is 1-2 in such contests thus far. George Mason looked just as discombobulated as I’d hoped (err, expected) in a narrow loss to Liberty Monday. (Is it too late, by the way, to pick Liberty to win the CAA?)

It’s early, but what if these slow starts aren’t a fluke for the CAA favorites? What if they spend time—a week, two weeks, a month, three months—trying to find their leader and discover their passion?

Hofstra is lacking for neither. The more time the other teams spend trying to find one or both, the better for the Flying Dutchmen. Even a Homer like me didn’t think Hofstra had the most talented team in the CAA entering the season. But what if talent’s not the determining factor this year?

The Flying Dutchmen won’t win any style points tonight, either, when they take on winless Fordham at the Arena. I do hope they win by more than four, though, because looking up all the results for the mid-majors with three or more wins was tedious. Oh who am I kidding, I had nothing else to do.

Regardless of what happens, check back here early Thursday morning for a recap. I haven’t been quite as prompt as I’d like with the recaps, but I’ll begin rectifying that tomorrow.

If you’re going tonight, see you there. I’ll be the guy yelling about Matt Carpenter. And hey, maybe Hofstra can spare a second to finally acknowledge the passing of Joe Margiotta.

Email Jerry at defiantlydutch@yahoo.com.
Posted by Jerry Beach at 4:09 AM

I'd like to see us blow out Fordham tonight. That team is horrible [lost to JMU at home by 20] and we shouldn't let them hang around.

If we win by double figures, I'll feel very good about where we are at this point.