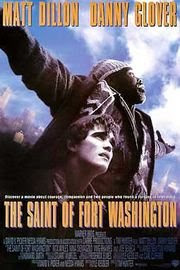 Greg Washington + a breakout game against St. Francis = an excuse to post a photo from a criminally underrated early '90s gem.

The most pivotal moment of the Flying Dutchmen’s 68-52 victory over St. Francis Saturday barely showed up in the box score and really had no impact on a game that was not nearly as close as the final score indicated (to borrow from this guy, you know you’re a lot better than the other team when…you get 12 players on to the floor in the first half).

But with 5:45 left, Greg Washington blocked a shot by Justin Newton—and then smiled and briefly hammed it up for the cheering student section. It symbolized a revelatory game by Washington, who racked up a career-high 12 rebounds and added nine points in 22 minutes and was particularly interesting because it came from someone who usually plays with a poker face and a bit of self-consciousness.

Again, just like with my analysis of Nathaniel Lester Friday, this is purely amateur shrink territory. But Washington has struck me as someone who realized that everyone THOUGHT he should be a Grade-A stud, because he’s 6-foot-10, but also knew his game didn’t yet match the expectations. It’s hard enough to play the game as is, I can imagine how tough it is when someone feels he’s not living up to the hype he had nothing to do with generating.

Guys who stand 6-foot-10 don’t land at Hofstra unless they’re raw, and Washington’s rawness was evident in his reed-thin stature (I’ve never actually seen a reed, BTW). His listed weight of 210 pounds inspired this quote (scroll down to October 30) from Tom Pecora (and now that Chris Gadley is gone, I’ve got 30 spare pounds if Washington wants ‘em).

It didn’t help Washington when he, through no fault of his own, turned into a near-mythic figure before he ever suited up for the Flying Dutchmen. The thought of a 6-foot-10 guy landing on campus—the year after Adrian Uter’s graduation left a huge hole in the middle and the year after George Mason made the Final Four with a plodding wanna-be NFL tight end at center—left Hofstra fans salivating at the thought of a Big East-type talent lurking in the paint.

The legend grew even larger when the NCAA declared Washington ineligible as a freshman and Dutchmen subsequently struggled to make the NIT in a season in which they were supposed to win the CAA and make a Mason-type NCAA Tournament run. If we only had an inside presence, the fan base thought, leaving unsaid the thought that the inside presence was supposed to be Washington.

The savior talk was quieted last year, when Washington averaged three rebounds, 1.6 blocks and 12.2 minutes per game for a team that was clearly more than one player away from contention. And when he opened the season by playing 25 minutes in his first four appearances (he was in street clothes for the Old Westbury game), it seemed as if he might forever be more curiosity than building block, the 6-foot-10 guy who could accidentally rack up a few boards and blocks per game yet was more comfortable shooting 12-footers.

But he posted consecutive double-doubles against Fordham and Towson, and even in a quiet performance against Stony Brook, he contributed by swishing a pair of free throws to seal the game with less than 10 seconds left. That, too, represented progress for a guy who was 3-of-17 from the line all of last year.

Washington will never have the build of a Dane Johnson or even a Uter or Darren Townes, but there he was Saturday, before the Big Block, muscling with his back to the basket against two defenders and converting a lay-up. While the Big Block was a pivotal symbolic point in his development, the ability to score down low will come

Washington has played more than 20 minutes in four straight games, a mark he reached just five times last year. Now that said, he played 20 minutes or more in three straight games last December before falling deep into the bench and recording three consecutive DNPs at midseason. So chances are there will be some more hiccups along the way.

But for now, as a 6-foot-10 sophomore on a program bursting with potential, the optimism is endless. And as a result, I think he’s surged past Miklos Szabo and right into First Guy To Get A Nickname territory.

How’s Gee Dubs (an obvious homage to Litos) sound? And should we call his blocks GWBs? These are the things I ponder with a week between games. Get here soon, conference season.

Email Jerry at defiantlydutch@yahoo.com.
Posted by Jerry Beach at 11:45 PM