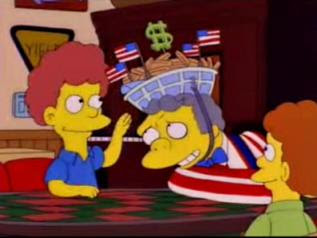 If this was the Moe's offering a student a year's worth of free food in exchange for a halfcourt shot, I'd re-enroll at Hofstra.

Some bits and bytes entering the weekend:

But at least Stony Brook’s got an excuse for the arrangement, since Pritchard Gymnasium is the program’s temporary home. I have a whole lot more contempt for the arrangement at Hofstra, because our administration yanked out press seats in order to place folding freaking chairs there. I realize about 97 percent of the country is giddy whenever the press is inconvenienced, but it hacks me off.

Plus, it’s damn dangerous. Let’s see how long that arrangement lasts after a 6-foot-5, 225-pound guy goes flying into someone in the mover-and-shaker seats.

Where in the hell was I? Oh yeah. So guess who takes a seat right in front of us at the end of the first half? Stony Brook president Shirley Strum-Kenny, wearing a Seawolves pullover with the America East logo stitched on the back. File under: Things you’ll never see at Hofstra, not in a million years.

—I also like Stony Brook’s student giveaways a whole lot more than Hofstra’s. At Hofstra, a student is selected at random to attempt a half-court shot. If he/she hits it, he/she gets free food at Moe’s for a year. No, not Moe’s Family Feedbag (pictured above), but Moe’s Southwest Grill. What a prize. Hit a miracle shot, get free gastrointestinal distress for a year. Sign me up!

At Stony Brook, meanwhile, the prize is a 42-inch plasma TV. Holy smokes. What kind of dorm rooms do they have at Stony Brook? I could barely fit a 13-inch rabbit-earred special into my room back in the day.

Alas, just like the kids at Hofstra, the guy at Stony Brook came up about 12 feet short on his shot. No TV for you.

—I’ll be rooting for Stony Brook to win the America East, because Pritchard Pit is a place that needs to host the championship game. What an environment. Though I can only imagine the logistical nightmare ESPN will present Stony Brook if the title game is there. I figure the capacity will be 37 after ESPN finishes setting up all its stuff.

—And finally, a few overdue links. SI.com had a highly entertaining piece on the man who saved Hofstra basketball, Jay Wright. There are plenty of anecdotes about Jay’s status as the nicest man in major college basketball, including this awesome quote from his first employer, Rochester coach Mike Neer: “Jay can sell sand to an Arab or red, white and blue to Bin Laden. You can’t say no.”

Jack Styczynski, who ran the Hofstra Hotsheet on Rivals.com back in the days when companies actually paid people to write on the Internet, revealed why Charles Jenkins’ favorite player is Pearl Washington, who starred for Syracuse before Jenkins was born. My goodness that sentence makes me feel old.

I’ll also be adding and updating the links on the right-hand side of the page to include the likes of this page from Proud Pride Fan of the Hofstra board at the CAAZone. He’s blogging about Jenkins and the Dutchmen this season for the Queens Ledger newspaper. Comprehensive stuff here, I like it.

Sean Brennan, the veteran and versatile New York Daily News sportswriter, has started a local hoops blog here. I like Dick “Hoops” Weiss, but his stuff is more national in scope. Kudos to the News and Brennan for thinking of the little guy, too.

And Newsday has also started a college hoops blog, though entries about the local squads are few and far between. Of course, on the list of things to be upset with Newsday about, that blog is way down the list and long after this news. More on that next week.

Email Jerry at defiantlydutch@yahoo.com.
Posted by Jerry Beach at 4:20 PM