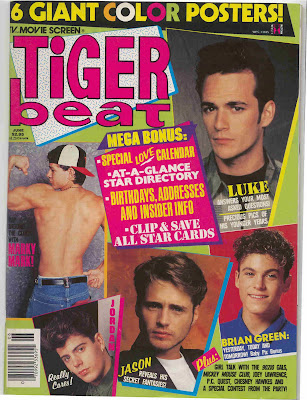 If you ever picked up Tiger Beat expecting to read about Towson, you were sorely disappointed. Or so I've heard.

Like with Bucknell on the football schedule a couple months back, seeing Towson (do you think there’s a blog in Maryland called Stubbornly Towson State? I hope so) next up on the docket for the Flying Dutchmen basketball team brings back some fond memories.

Actually, the memories shouldn’t be so fond, since all Towson did during the Defiantly Dutch era was kick Hofstra where it hurts. But what can I say? Nostalgia is strange and unpredictable.

The Tigers knocked off the top-seeded Dutchmen in what was supposed to be the final ECC championship game in March 1992 (of course, that didn’t really upset me at the time, since I was skipping class to play hearts at community college and couldn’t have found Hofstra on a map). There was no automatic bid to the NCAA Tournament at stake and no expectations of an at-large bid by Butch van Breda Kolff—who had no idea he was proving the more things change the more they stay the same when he told Newsday the selection committee would “…rather take a seventh-place team in the Big 10, the ACC or anything other than the ECC”—but a win over Towson would have made Hofstra 21-8 and given it a pretty good shot at an NIT bid.

Towson gave the selection committee—albeit in a different sport—all the ammo it needed to keep an underdog Hofstra squad out of the postseason in October 1994, when the Tigers stunned the unbeaten Flying Dutchmen football team, 24-21, in an instant classic at Hofstra Stadium. Towson led 24-7 entering the fourth quarter, but the Dutchmen stormed back, whipped a crowd of 5,829 into a frenzy and appeared to take the lead when Nick Johnson scored on a 34-yard reverse. But the Dutchmen were called for a ticky-tack holding penalty (oh sure, I’m over it) and the drive eventually stalled at the Towson five-yard-line in the final minute.

Fourteen years later, I’ve still never seen a post-game locker room sadder than that one. That’s the difference between the pros and mid-major colleges: The pros almost always have next year as well as piles of million dollar bills on which to sleep. The mid-majors have one random, light-streaking-across-the-sky shot and an eternity to wonder what could have been.

Offensive lineman Ricky Wyatt, officially listed at 6-foot-2, 230 pounds but unofficially A Very Big Dude, sat stoically at his locker, still dressed in his uniform, for a while before his shoulders began to shake and tears began to stream down his face.

“We played hard and the fans were awesome,” said Wayne Chrebet, who had no idea he was four years away from playing for the AFC title. “But we lost, and it’s a loss that myself and the other seniors are never going to forget for the rest of our lives.”

The stakes weren’t as high at University Field in April 1996, because, well, has there ever been a high stakes Hofstra baseball game? But Towson’s 9-3, 11-inning win over the Dutchmen was much more compelling and dramatic than the final score would indicate. (I’m not going to subject you to the overwrought prose I churned out for The Chronicle that week, so you’ll just have to trust me on it) It also extended the Tigers’ win streak over Hofstra to 19 games. NINETEEN GAMES! That’s unpossible!

A decade later, a 94-91 loss to Towson in men’s basketball may have been the loss that kept the Dutchmen out of the NCAA Tournament. Had the Dutchmen—who, as Michael Litos reminded us earlier today, were missing Adrian Uter, who was in the midst of a four-game absence due to a bad ankle—won that game, they would have finished 15-3 and in a three-way tie for the CAA championship. Winning a share of the regular season crown was among the pile of crap reasons the band of roving idiots provided for giving Mason the at-large bid. Of course, had Hofstra shared the regular season title but lost in the CAA tourney, this guy probably still would have come up with another reason to keep Hofstra out.

Where was I? Oh yes. All that said, for the handful of heartbreaks Towson has provided the Dutch, Hofstra’s actually had the upper hand in the rivalry.

The two programs have been going in opposite directions since they were reunited in the NAC/America East in 1995-96. While the Flying Dutchmen won consecutive America East titles and have become a regular CAA contender, Towson has endured 11 straight sub-.500 seasons, hasn’t finished higher than seventh in the CAA since joining in 2001-02 and finished higher than eighth just once in its final five years in the America East.

But maybe this is the year the rivalry is renewed. Hofstra and Towson were both picked to finish in the bottom half of the CAA, but they’re among the few—if not the only—teams in the conference to exceed expectations thus far. Litos likes the Tigers, a lot, and the stats he produces in today’s blog indicate Towson is putting together a team that will look familiar to the Flying Dutchmen.

Add it all up and this is the most intriguing December game the Flying Dutchmen have played in a long time. A win Saturday, in a place where close games are the norm (five of the seven games in Towson in the Pecora era have been settled by seven points or less), could be a springboard to a season much better than anyone envisioned.

Of course, I predict a narrow victory. And of course, if the Dutchmen fall, I reserve the right to say it’s just one game and it’s too early in the season to declare watershed moments. Hey, my blog, my rules.

Alas, win or lose, we won’t be there. We’ll be listening to or watching the game (which you can also do right here) as we put up the Christmas tree. So if you crane your neck just right, you’ll probably hear me yell “FINE! YOU’RE SO SMART, YOU RIG UP THE LIGHTS!”

Email Jerry at defiantlydutch@yahoo.com.
Posted by Jerry Beach at 11:34 PM

Did you really post the front of a Tiger Beat magazine with 90210 people on there? Sheesh.

Plus, one of my personal favorite minor league players went to Towson!