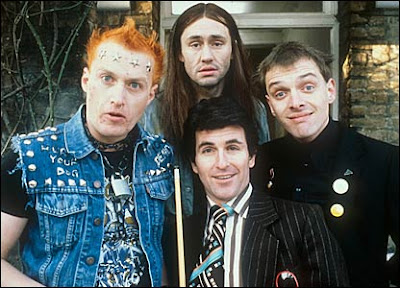 Vyvyan, Neil, Nigel and Mike are all on the bandwagon, even if we're playing popular American music instead of British punk.

Some bits and bytes, most looking back, one looking ahead:

—The bandwagon is getting more crowded. Two wins last week seemed to impress the coaches who vote in the mid-major poll at Collegeinsider.com. The Flying Dutchmen made the biggest leap in the rankings in moving from 19 to 11 in a poll released Monday. Only one CAA team—VCU at no. 9—ranks ahead of Hofstra.

Plenty of room here, but if you don’t hurry you might have to fight for seats in the middle and front of the bus. Because everyone knows the cool kids sit in the back, and the prime real estate—the very last seats on the bus—are already occupied by Sully Ray and my wife. They’re also in charge of the music, which means an eclectic mix of Bruce Springsteen, Billy Joel and the New Kids on the Block performing the very worst Christmas song ever recorded.

Where was I? Oh yeah.

Dennison remained cold from outside (0-for-3 from 3-point land) but drove the lane for four layups and finished with nine points in 26 minutes, his most extensive playing time since Manhattan. Dennison is listed at 6-foot-3 and 180 pounds, right around the size of the recent superstar guards at Hofstra, but he looks broader than Loren Stokes, Carlos Rivera or Antoine Agudio and better built for slashing to the basket, particularly if he never finds his form from beyond the arc (11-for-40 thus far).

After playing just 27 minutes in the previous three games combined, Townes played 21 minutes against St. Francis and tied a season-high with seven rebounds. He also had six points and equaled his season total entering the game with two blocks, including one of his fellow no. 21, Nigel Byam (best name of the year, bar none).

—I hope someone else in the audience hears/sees the name Nigel and thinks of The Young Ones, the freaking hilarious British comedy that aired on Sunday nights on MTV in the mid-80s. It’s true: MTV used to show something other than music videos. I know that’s shocking to you, kids.

—I can’t decide if someone should assume point guard duties from Charles Jenkins or not. He seemed a bit out-of-sorts Saturday, when he tied his season low by scoring 11 points on a season-worst 4-for-16 shooting. He drained his only 3-pointer in six attempts immediately after Greg Johnson replaced him at the point following the second media timeout of the first half.

Yet on the other hand…why mess with what’s working when your best player is able to make multiple contributions even when his shots aren’t falling? He had 10 rebounds Saturday, tying his career high set against Iona in February. And the other time he had 11 points, he dished out a career-high nine assists against Manhattan.

He also added seven assists Saturday, putting him within flirting distance of the first triple-double in school history. When your best player has a down game by his standards yet still puts up a line that reads 11-10-7, you’ve got a pretty good best player.

Jenkins has earned plenty of comparisons to Stokes, but while Stokes had plenty of eye-popping double-doubles (like the 30 points and 15 boards he racked up against William & Mary Jan. 20, 2007), he never put up a line like the one Jenkins produced Saturday. Among recent players, Rivera came closest to Jenkins’ stat line, coincidentally enough against St. Francis on Dec. 20, 2005, when he had 11 points, 10 assists and four boards.

—Greg Johnson, meanwhile, had one of those “why can’t he do this all the time” games Saturday, when he scored five points (only the third time this season he’s gotten into the scoring column), tied a season high with three assists and recorded five steals, two more than he had all year coming into the game. He did have three turnovers in 17 minutes, so it wasn’t quite perfect. But as the lone pure point guard on the roster, I remain convinced he’s going to pull a Roberto Gittens in the second half of the season and get big minutes down the stretch.

—Shame on me for not pointing out Friday that a win Saturday would lift Tom Pecora out of a tie for fourth place on the all-time win list at Hofstra with his best friend and predecessor, Jay Wright. Well, congratulations to Pecora, who now has 123 wins in just over eight seasons. He’s 23 wins behind Frank Reilly and 29 wins behind Paul Lynner, so Pecora will become the second-winningest coach in Hofstra history when the Dutchmen cut the nets down in Detroit on the first Monday of April! Alas, Butch van Breda Kolff’s 215 wins are still multiple seasons away for Pecora.

I have no idea how rare it is, but I can’t imagine it’s all that common for a heir apparent to record more wins than his mentor. Either way, it’s pretty cool that two coaches have been able to craft such distinctive legacies over a 15-season span.

—Lastly, the game against UMass this weekend just got a lot more interesting after the Minutemen shocked Kansas, 61-60, Saturday. Sure, the Jayhawks were decimated by graduation and early departures for the NBA and the win was in Kansas City and not at Allen Fieldhouse, but still, a win over the defending national champs on their turf is pretty remarkable anytime.

The win provided further proof UMass is better than its 3-6 record: The Minutemen have lost three games by four points or fewer and dropped another by seven points. They also played Memphis, which fell to Kansas in the national championship game last year, so the schedule is RPI friendly.

Speaking of the RPI: I have zero faith Hofstra can get an at-large bid even if it goes 31-2 and falls in 12 overtimes in the CAA final, but regardless, this is the Dutchmen’s best chance to boost its standing in the RPI before conference play starts. More on the Minutemen later this week, but one look at the UMass roster and the year-to-date stats indicates this will be the biggest test—literally—of the Dutchmen’s new-found depth and inside presence. A win Saturday and the bandwagon might get really cramped.

Email Jerry at defiantlydutch@yahoo.com.
Posted by Jerry Beach at 6:56 AM

LOVE the Bits and Bytes references. Have to be an alum to truly appreciate those, and also to understand just how horrible those hamburgers were.
Looking forward to the UMass game to get a true idea of where we are. You're right about UMass having a lot more talent than its record indicates. The problem is the Minutement are trying to adjust to the dribble drive motion offense, and the transition hasn't exactly gone smoothly.