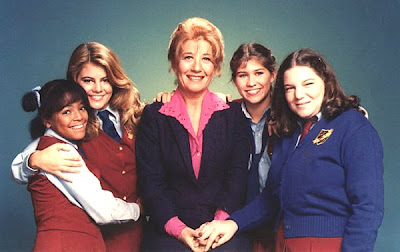 I'll bet you Hofstra was a popular collegiate destination for the graduates of Eastland School, a mere 60 or so miles from Hempstead. (In related news, I had a monster crush on Lisa Whelchel)

I know what I wrote Saturday: That I thought the best situation for the Flying Dutchmen was to enter the CAA Tournament as the sixth seed…but that if they ended up as the fourth seed, I’d come up with plenty of reasons why that was good, too.

Well, they finished fifth, which earned the Dutchmen a second straight game against 12th-seeded UNC-Wilmington. And I’ll be honest: Such a seeding and matchup launched me into a pit of despair that left me alone in the fetal position, sucking my thumb and shaking uncontrollably.

Thanks for not winning one of those one-point games, Drexel! You rock!

That’s fine though. Because if—nay, WHEN—they are the last team standing from tonight, the Dutchmen will have earned it unlike any champion in CAA history.

Sure, history states it has been impossible to win the tournament without earning a bye since the conference expanded in 2001-02. In addition, in the 26-year history of the CAA, only one team seeded lower than fourth has ever won it all (East Carolina was the seven seed in an eight-team tournament when it ran off three straight wins to reach the Big Dance in 1993).

But it’s good the Dutchmen are playing on Friday. A team prone to disastrous starts and blowout losses needs all the momentum and confidence it can generate, and what better place to build said traits than the 5 vs. 12 game?

But a third game against UNC-Wilmington—the Dutchmen have never had a chance to beat the same team three times in a season since joining the CAA—will be no cakewalk. The Seahawks lost the first two games against the Dutchmen by a combined nine points and have got to be the scariest 3-15 team in the history of the sport, or at least the CAA.

Undersized and fast-paced, the Seahawks force Hofstra out of its usual game: Two of the Dutchmen’s five 80-point games this season came against UNC-Wilmington. And UNCW is doubly dangerous because it is the—cliché alert!!!—proverbial team that plays with no fear because it has nothing to lose. Before taking the Dutchmen to overtime Saturday, the Seahawks fell to George Mason by one. And they’re 1-8 in their last nine games, but the win came against top seed VCU.

A Dutchmen win Friday sets up what I envisioned less than two weeks ago: The Saturday afternoon elimination game pitting two of the league’s hottest teams against one another. But instead of Drexel, the Dutchmen would face fourth-seeded Old Dominion, which went a league-best 8-1 over the last nine conference games and should be doubly motivated for the quarterfinals.

The “1” came at the hands of the Dutchmen, who never trailed in beating ODU 60-51 at Hofstra Feb. 10, and the Monarchs were upset in last year’s quarterfinals by fifth-seeded William & Mary. Plus, you know, the Virginia-based CAA wants ODU to face VCU in the semifinals. (Where is my conspiracy theory font?)

And THEN, if the Dutchmen manage to beat Old Dominion, their likely reward is a semifinal date with VCU, whose fans make the marathon cross-town trip to negate the “neutral court” of Richmond Coliseum.

Of course, trying to project a potential Sunday opponent for the Dutchmen is sheer lunacy in a season in which very little went according to form. Look no further than the Dutchmen, who were picked to finish seventh or lower in seven of the 10 polls we got our hands on last fall. (Check out that link though: The predicted top four are the top four, albeit in slightly different order)

For all my hand-wringing over the challenges of being the five seed, though, there’s little arguing that the Dutchmen ended up right where they belonged. They went 2-4 against the top four and none of the seven defeats should have any of us wondering what might have been. Only the two losses to VCU were competitive.

Sure, they’ve played like a team worthy of a bye the last six weeks. But the first two weeks of January counted, too, and the Dutchmen may have been the worst team in the conference over that stretch.

One way or the other, if you’re a Flying Dutchmen fan, there will be no middle ground this weekend. That a team that has played so well for most of the last month-and-a-half could go home Saturday afternoon—or even, heaven forbid, Friday afternoon—may seem cruel, but that’s March for you. And the possibility of a far more generous fate is well worth the emotional investment.

Great risk. Great reward. What else do you want at the greatest time of the year?

Without further ado, here are those afore-mentioned standings over the last six, nine and 12 conference games:

Email Jerry at defiantlydutch@yahoo.com. And join the Defiantly Dutch group at Facebook today!
Posted by Jerry Beach at 9:50 AM