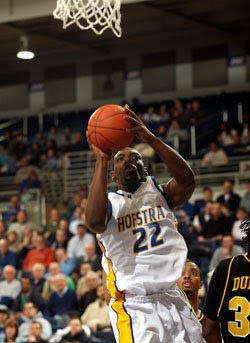 All it takes is one look at the stat sheet to understand why Charles Jenkins is the favorite player of a revitalized Lions Den. Jenkins, touted as the latest in a long line of top-flight guards at Hofstra when he arrived in 2006, has proven worthy of his advance billing this season by filling up the box score, a la predecessors such as Speedy Claxton and Loren Stokes. Jenkins leads the Flying Dutchmen in scoring, assists and steals while also ranking third in rebounding.

Jenkins turned 20 Saturday, when the student section serenaded him with chants of “Happy Birthday” prior to the game against UNC-Wilmington and presented him with a cake after Jenkins scored a career-high 35 points to lead the Dutchmen to an 88-81 overtime win.

He’s also finding himself recognized more often around campus. “I’ll see someone that I don’t think even knows me and they’ll just scream my name or start a chant,” Jenkins said following practice Tuesday. “It’s crazy. A lot of guys even traveled to Fairfield, they traveled to Delaware.”

Fans also see a kindred soul in the emotional Jenkins. While Claxton, Stokes, Jason Hernandez, Carlos Rivera and Antoine Agudio played with a certain stoicism, Jenkins has worn on his sleeves (well, so to speak, anyway) all the ebbs and flows of a challenging sophomore season.

That passion fueled Jenkins and the Dutchmen during an eight-game winning streak in November and December as well as in a convincing, wire-to-wire victory over Old Dominion and overtime wins against UNC-Wilmington and James Madison. But it could also be a hindrance, particularly when Jenkins endured the worst shooting slump of his career over a nine-game stretch spanning December and January.

“He was a mirror image of us because that’s how important he is to us,” Tom Pecora said. “There’s been nights where Nathaniel or Corny or Ziggy have picked up the slack a little bit, but for the most part, as Charles goes, we go.”

Jenkins hoped to snap out of the slump by taking extra shots before and after practice, but after a 4-for-24 effort against Delaware Jan. 7, Pecora finally had to tell him to leave the gym.

“I was getting frustrated because the shots weren’t going and I was saying ‘Coach, if I practice every night, why am I not seeing it on the court?’” Jenkins said. “And coach kind of used reverse psychology. He told me to calm down, just relax, maybe come in and shoot free throws and don’t go so hard. I was tiring out my legs, being in here until 2 in the morning and waking up, going to classes and coming to practice.”

Jenkins was also consumed by the delicate balancing act of captaining a squad on which he is the youngest player. While plenty of his predecessors have emerged as team leaders as sophomores, none of them had so many responsibilities at a young age. Jenkins said he was helped by the elevation of senior Mike Davis-Sabb to co-captain near the end of the non-conference schedule.

“I was always meeting with [Pecora] and asking him how would I get through to some of my teammates, because at that point I felt like I wasn’t getting through to everybody,” Jenkins said. “Coach did a great job of making Mike Davis-Sabb a co-captain, because he’s a very vocal person.”

Neither Jenkins nor Davis-Sabb had to say a whole lot to ignite the Dutchmen’s annual February surge. The month began with a 78-54 loss to George Mason, after which the Dutchmen went 6-1 to improve their record under Pecora in regular season games played after February 1 to 38-11.

“Getting embarrassed on national television—it sucks, no one likes to lose, especially when you lose by a lot,” Jenkins said. “We feel we can compete with any team in this league, and for us to go down there and lose like that, it was more of a wakeup call for us, because we can’t come out sluggish against any team, especially on the road.”

Jenkins realizes youth is no longer an excuse for anybody on the Dutchmen. This weekend is the perfect time to display what the Dutchmen have learned over the last few months and to avoid slow starts while trying to avoid the need for fast finishes (the Dutchmen are 12-2 in games decided by five or fewer points) by putting a team away when they have the chance.

“When a game is close or [there’s] a close game that we lose, we look at the last play,” Jenkins said. “But coach always tells us there’s plays earlier in the game—like getting a rebound or getting a stop—that can change the game from an eight-point lead to a 10-point lead. Certain things like that—lock them in on defense, get rebounds, steals, taking charges. Those are things that can help put a team away. When we get a lead sometimes, we get a little comfortable with the lead and back off instead of smelling blood.

“We’re not really young anymore. We don’t have any freshmen on the team. We’ve got a lot of experienced players, so it’s just something that we have to do this week.”

Email Jerry at defiantlydutch@yahoo.com. And join the Defiantly Dutch group at Facebook today!
Posted by Jerry Beach at 1:41 PM