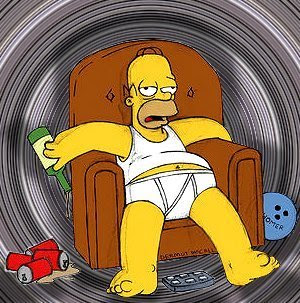 The author, above, wonders what the bowling ball is doing strewn about the beer and booze bottles.

That little red-haired orphan was right. The sun did come up tomorrow. Or, in this case, yesterday.

Except said sun came up an hour later than it did on Saturday. That’s right: The Flying Dutchmen’s loss to Old Dominion in the CAA quarterfinals was so jarring, it completely screwed with the time/space continuum.

Or maybe the sun rose on time, and I just didn’t notice because I wasn’t yet functioning following a Saturday night of drowning my sorrows at Fezziwigs, belting out “American Pie” and “Brown-Eyed Girl” with Rick and Ted and generally living out the lyrics of a Poison song.

Anyway, Sunday wasn’t nearly as soul-crushing as Saturday, but it was disappointing nonetheless. I’m from the school of thought that says if the team you root for can’t win the championship, root for the team that eliminated your team to win it all. Well, with occasional exceptions, of course.

But Old Dominion couldn’t recover from a run by VCU early in the second half and fell to the top-seeded Rams, 61-53. Like the Dutchmen a day earlier, the Monarchs squandered an early double-digit lead, fell behind late in the first half before coming back to take a one-point halftime lead. Unlike the Dutchmen, there was no second half comeback for ODU, which trailed the final 17 minutes. I’d like to say the Dutchmen wore out the Monarchs Saturday, but I think the real problem Sunday was Gerald Lee’s re-injured ankle and Eric Maynor’s general awesomeness.

In the nightcap, Towson’s shocking run came to a halt when the Tigers ran out of gas in the second half against George Mason, which means a season of wild unpredictability ends with 1 vs. 2 in the championship game for only the second time since the CAA expanded in 2001-02. I think that’s ironic, in that it’s not ironic at all.

It would have been easy to root for Towson had it gotten to tonight, but instead we’ll have to be willing to sacrifice an NIT bid for the greater good. Sure, a Mason win would almost surely help the Dutchmen’s NIT candidacy (more on that tomorrow), but I’d rather clean all the bathrooms in Grand Central Station with my tongue (and have a 2008 CIT banner hanging at the Arena) than spend a single second in Mason Nation. Anyone got a VCU jersey I can borrow for a couple hours?

Make sure to check out Litos' excellent blog for much more about the semifinals and make sure to click repeatedly throughout the title game tonight.

Other bits and bytes from The Day After:

—I never linked to the stories about Hofstra-ODU. I’d like to say I was in denial, but the truth is I just forgot. So check out the Dutchmen-centric stories from the Daily News and Newsday as well as the excellent coverage from the Virginia newspapers. The Richmond Times-Dispatch has a gamer, as does the Newport News Daily Press (check out the bummer of a picture from the immediate aftermath of Charles Jenkins’ miss at the buzzer). This Daily Press blog breaks down the Jenkins-Lee battle while this column profiles Jonathan Adams, the Monarchs’ lone senior, their emotional leader and the big ol’ meanie who blocked Jenkins’ shot. And The Virginian-Pilot profiles the soft-spoken Lee.

—The Dutchmen’s NIT hopes got more good news than bad news in the aftermath of the loss to ODU. Davidson, the top seed in the Southern Conference and the darlings of the 2008 NCAA tournament, lost to College of Charleston in the semifinals and are likely bound for the NIT (much to the relief of the Big Six, I am sure). But top-seeded Northern Iowa won the Missouri Valley while top seeds Binghamton (America East) and American (Patriot) survived scares. Tonight, the Dutchmen need to root for a win by Siena in the MAAC finals.

The d’oh/whoo-hoo moment of the weekend, meanwhile, occurred in the Atlantic Sun championship game Saturday, when East Tennessee State beat Jacksonville. That’s good because it means the Dutchmen have beaten an NCAA Tournament team: The Dutchmen edged ETSU 76-75 in the third game of the Charleston Classic way back in November. But it’s bad because Jacksonville was the A-Sun’s regular season champ, which means it’s headed for the NIT.

The Dutchmen last beat an NCAA-bound team in 2006-07, when they eked out a 65-64 win over eventual Patriot League champion Holy Cross in the Bracket Buster.

—And speaking of the America East, I always follow its conference tournament, and Binghamton’s comeback win over New Hampshire restored a shred of sanity to a tournament that went haywire for the first time ever. Had fourth-seeded New Hampshire—coached by Bill Herrion, who led Drexel to three straight NAC/A-East titles from 1994-96—held on to a five-point lead in the final two minutes, it would have hosted the title game against sixth-seeded Maryland-Baltimore County.

That would have been crazy stuff for a conference in which only one team seeded lower than second has won the title and in which at least one top two seed has reached the title game every year since 1983. Along those lines, the VCU-Mason matchup tonight assures that a top two seed will win Hofstra’s conference tournament for the 14th time in 15 years. Damn you chalk! Damn you to hell!

Email Jerry at defiantlydutch@yahoo.com. And join the Defiantly Dutch group at Facebook today!
Posted by Jerry Beach at 4:33 AM